The discreet charm of KV Kamath

As the first head of the BRICS bank, India’s most venerable banker has a chance to play out his fabled neutral position on a global stage 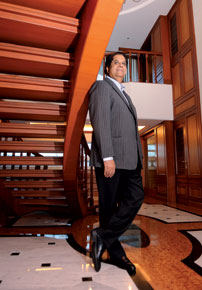 A Mumbai-based banker describes ICICI Bank Chairman Kundapur Vaman Kamath, who has been named the first president of the New Development Bank set up by BRICS countries, as ‘Switzerland’ for his credentials as a “neutral person” who is acceptable to politicians and corporations of all hues. Based in Shanghai and popularly known as the BRICS Bank, this new lender will offer funds to emerging countries for infrastructure projects. It is seen as a counterweight to the World Bank, with the fast-growing BRICS—Brazil, Russia, China, India and South Africa—now accounting for as much as a fifth of the entire global economy and 42 per cent of the planet’s population.

In an interview to some journalists just days before he was named for the bank’s coveted top job, Kamath was tight- lipped about being in the race, saying he preferred not to discuss such “political issues”. Kamath, says the Mumbai banker, has cultivated the habit of being “discreet and confidential too” to go with his ‘neutral’ stance. “He is friends with everyone,” says Nachiket Mor, a well- known banker whom Kamath had hired at ICICI Bank in 1987, “He is a professional banker and is close to all his clients.”

Kamath’s famed ‘neutrality’ was in great demand in late 2004 when Kokilaben, widow of his late friend Dhirubhai Ambani, requested him to broker peace between her warring sons. Unlike many others, Kamath had not taken sides—either Mukesh’s or Anil’s— after the spat became public. He had also refused to play the role of a go- between during the dispute. Yet, both of them accepted his verdict as the basis of a settlement. It was Kamath, along with Dhirubhai’s long-time friend and merchant banker Nimesh Kampani, who helped draft a new ownership structure of the empire that Dhirubhai built from scratch. “It wasn’t unexpected … it was perhaps only natural that Kamath helped the brothers settle their dispute because it was Kamath who had helped Ambani Senior in his struggling years,” says a merchant banker who has closely followed Kamath’s career. According to a report in The Economic Times, in the early 1970s, when Dhirubhai Ambani’s loan requests to expand his textile business were turned down by most others, the banker who came to his aid was Kamath, then a young dealing officer at Industrial Credit and Investment Corporation of India, the financial institution that founded ICICI Bank and merged with it in 2002. Over the years, while Kamath rose to become the CEO and managing director of ICICI Bank, India’s largest private- sector lender, Dhirubhai Ambani led an ‘equity cult’ and turned Reliance Industries Ltd into the country’s biggest private sector entity. “While Dhirubhai rewrote the rules of the game in the world of Indian business, Kamath did so, though not so aggressively, in Indian banking,” says a former Finance Ministry official based in Delhi. Kamath, who retired as the chief of ICICI Bank in 2009, remains its chairman. He is also chairman of Infosys Ltd, India’s second biggest infotech services firm by revenues.

Mohandas Pai, a former Infosys director who is currently chairman of Manipal Global Education, says he is pleased with Kamath’s capacity to embrace new concepts and then implement them. In the 90s, when India had few ATM dispensers (all with foreign banks), it was Kamath who insisted on dotting the country with ATMs of ICICI. People were sceptical whether Indians would adapt to machines in place of human tellers, but “he proved he was right”, notes Mor.

Pai says he met Kamath first at a ‘leasing conference’ in the early 90s. “Leasing was a new concept and he came across as a rockstar then, very articulate. Later, we were in an investor conference in Hong Kong where he spoke well. During the past decade, he always came across as an ‘India Bull’, arguing that our growth was at least 2 per cent per annum higher,” he recalls. “He is a techie at heart who laid down the rule that every new application had to be [processed] in 90 days, an extraordinary statement those days (the 90s),” adds Pai.

When Kamath took charge of ICICI Bank, it had assets of Rs 21,000 crore, and by the time he stepped down in 2009 for Chanda Kochhar to succeed him, it had assets in excess of Rs 380,000 crore. It was Kamath who set up ICICI’s leasing business and its strategy department, even as he played many other roles within the company under the guidance of his mentor N Vaghul, his predecessor atop ICICI.

“Kamath has good exposure to international banking and is extremely good at team building,” insists Mor, who has worked closely with Kamath. His first experience of global banking standards was in 1988, when he left India to join Asian Development Bank in Indonesia. According to Kamath, Vaghul let him go under the condition that he return when needed. He was impressed by the rapid economic growth of South East Asian countries, which were reducing poverty at a fast clip. In the mid-1990s, a few years after India was liberalised, Vaghul asked Kamath to return to head the company, and he did.

Pai, who has known Kamath for a long time, says that Kamath has been an aggressive banker who is also an expert in large deals. “He had an uncanny ability to spot a big deal. Top-of-the-line ones. He drove [ICICI Bank] into an aggressive retail strategy to diversify away from a large, almost exclusively corporate book. I remember when he made a $5 billion ADR issue, raising capital when the market was hot. The market collapsed soon after, and his large capital raising helped the bank immensely. When the bank had large outflows of deposits, he stood like a rock to sail through. He was fair and nurtured talent.”

Importantly, notes Pai, “Women leaders at the bank were [encouraged by] bank policies like no transfers, liberal maternity leave, etcetera. It started with N Vaghul, which Kamath continued.” Insiders say he was always gender neutral as well, and that helped women bankers ascend the hierarchy. If Kochhar heads ICICI Bank, Kalpana Morparia, who was with ICICI Bank for 33 years, is now CEO of JP Morgan India; and Shikha Sharma, who was with ICICI Group for nearly 30 years, is now CEO of Axis Bank.

At ICICI, according to Mor, nobody cared whether his boss was a woman. “We didn’t see them as women bosses, only as bosses. That was the culture,” he says, emphasising that what does Kamath the most credit is the team he forged of senior bankers who could contend for the top post. “He is someone who sets extremely high standards,” he adds, “He pays close attention to details. He often makes big moves, not incremental ones. He hires extremely talented people and gives them absolute freedom and holds them accountable for what they do.” Thanks to such leadership, there were at least 10 contenders for his post when he was due to retire. “I think five of those super-talented people were fit for the job,” says Mor, “He was adept at creating bench strength and he felt no insecurity in doing that.”

Pai and at least two bankers who Open spoke to feel that Kamath also emerged as one of India’s most important bankers because of how well he leveraged technology. He also created a retail portfolio and expanded fast, they argue. Kamath himself has attributed his success to the aggressive raising of capital and expansion beyond project finance.

For all his aggression and hard- nosed professionalism, Kamath is unassuming and friendly as a person who often enquires after the family members of his employees. Born in Mangalore, Kamath is an alumnus of St Aloysius College and IIM-Ahmedabad. He started his career with ICICI in 1971 and reached the top.

Arvind Panagariya, vice-chairman of the NITI Aayog, first met him more than a decade ago at a conference at the Brookings Institution in Washington DC. “In my mind, he was already an iconic figure on not just the corporate but national scene by then,” he says, “At the conference, he gave a superb account of the reforms India had done and those it still needed to do…. I found Kamath very mild-mannered.” Panagariya is glad that the BRICS Bank has Kamath at its helm to guide it right from inception.

“It is a great choice,” says Pai, “He is a big-vision person, globally networked, very articulate, multicultural and above all, an institution builder. He will make a great global banker in an area now dominated by the West.”

A Padma Bhushan awardee, Kamath recently refused to join the pack of business leaders who said the Narendra Modi Government wasn’t quick enough in fast-tracking reforms, arguing in an interview to a business daily that Indian industry was barking up the wrong tree by blaming the Centre instead of setting its own house in order.

Kamath takes over as president of the new financial entity based in Shanghai at a time when India, which needs an estimated $1 trillion for infrastructure, is starved for global funds. He stint is expected to be for five years and the challenges ahead are many: he would have to resist pressure from various stakeholders (BRICS countries, with China as a heavy- weight) to frame policies and make allocations. The 67-year-old banker, whose father was once the mayor of his hometown Mangalore, knows the game of steering clear of such political pressure only too well. He also knows the region and its banking processes very well, especially those of China and Russia besides India.

Known for his organisational prowess and hiring of sound minds, Kamath has long been attracted to the idea of a ‘universal bank’ , which typically participates in many kinds of banking activity, acting as a commercial bank as well as an investment bank, besides offering allied financial services such as insurance. “From that level, for Kamath, the next move is to head a body like the BRICS Bank, which is international by nature and therefore right up his alley,” says the former Finance Ministry official.

The bank will begin with a capital base of $50 billion, which, if all goes by plan, will be doubled in some time. Kamath, a mechanical engineer who later became an expert at financial engineering, has said that the appointment is a great honour for him. “He knows the rules of the game. He is also one of the most tech savvy honchos among bankers. He knows what he has to do and he would do very well in his new position, like all the positions he has held in the past,” says a banker who has known him for long.

Sure, he would. Considering the intense geopolitical pressure games that are likely to surface soon within the new body, it is perhaps the discreet banker’s biggest challenge yet.