The Budget to Expect

Finance Minister Pranab Mukherjee is a cautious reformer. And India faces peculiar economic challenges this fiscal year. It adds up to this: realism will dictate the pace of economic reforms 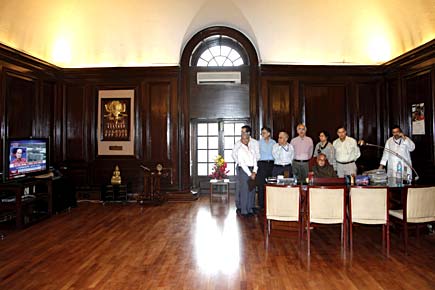 Pranab Mukherjee is a cautious reformer. And India faces peculiar economic challenges, so realism is likely to dictate the pace of  reforms


Pranab Mukherjee is a cautious reformer. And India faces peculiar economic challenges, so realism is likely to dictate the pace of  reforms

Over the past couple of months, pollsters and political pundits appearing on TV tirelessly lobbed at us the cliché that Election 2009 was the most crucial in the country’s history. For the next month or so, or until the new Finance Minister Pranab Mukherjee stands up in the Lok Sabha to deliver his long speech, the Union Budget is likely to attract similar adjectives. Trading in hyperbole may be a common affliction in the world of TV news, but it wouldn’t be an overstatement to bill the forthcoming Union Budget as potentially the most important since the one presented by Manmohan Singh in 1991.

Since 1991, industrialists and businesses have been content with the market-oriented status quo on economic policy, with state spending kept in check. But today, things are different. For the first time in six years, India’s GDP growth has slipped below 8 per cent (with gloomy forecasts expecting less than 6 per cent in 2009-10), and the bad news on industrial production and other indicators has only been piling up. This, even as the wait for the Centre’s fiscal stimulus to kick in grows longer.

Could the Budget signal the long-awaited recovery? Can Pranab Mukherjee make up for time lost during UPA’s earlier regime? With the Left no longer playing bully, expectations have soared—as seen in stockmarket indices. There’s no denying that the Budget will be a crucial part of Prime Minister Manmohan Singh’s much vaunted 100-Day action plan.

That the new government is broadly reformist by instinct is also reasonably clear. But what exactly it means for economic reforms is less obvious. “The Budget has to be a statement of intent and action,” says Uday Kotak, chairman, Kotak Mahindra Bank, “It would be disappointing if there’s only intent and no action, or vice versa, and there is need for measured stimulus packages.”

With exporters hurting, cries for bailouts are not dying down yet. “The Budget must take up the plight of exporters as a priority,” says A Sakthivel, chairman, Federation of Indian Export Organisations, “A 33 per cent slide is a record negative and poses huge challenges. We should get credit at Libor plus 250 basis points. This would be an important step, since dollar financing has all but dried up for us.” The Finance Ministry has identified textiles and leather goods as industries in need of help, the big employers that they are.

Overall, however, ‘help’ will take other forms. The Budget’s big emphasis is likely to be on spending money rather than raising revenues. “Given that it’s a problem of slow demand, fiscal conservatism needs to be shed,” says Surajit Mazumdar, professor at the Institute for Studies in Industrial Development, Delhi, “Supply problems in sectors such as agriculture cannot be addressed without public investment. There is absolutely no case for restraint at the moment. In any case, the fiscal deficit is not inherently inflationary when the economy has vast unutilised production capacity, which is the case with our industrial sector right now.”

In line with such expansionary thinking, Pranab Mukherjee has spoken of a “balance” between economic growth and fiscal deficit reduction—which assumes a budgetary government role in commercial activity. This is an indication that statist measures brought on by the recession are likely to endure. Expect some priority lending via state-run banks and other balms, especially for medium and small-scale enterprises.

The thrust of state spending is likely to be on education, health and infrastructure. The last of these demands immediate attention. Big-ticket projects need to be given the go-ahead, and the Golden Quadrilateral highway network needs speedy completion. Bharat Nirman could also do with redrafting for better focus. It would be no surprise if rural India attracts a hefty share of the outlay. Getting Indian villages up to scratch and sustaining agricultural growth are must-dos.

Amit Mitra, secretary general of the industry body Ficci, thinks it is time for a second green revolution. “Banks should lend on a priority basis to private sector companies keen on making investments in agri warehouses and cold chains,” he says, “Agri investments should also be eligible for 150 per cent weighted [tax] deduction, similar to that for R&D investments.” Plus, rural outreach credit programmes could help.

For everyday taxpayers, an upping of the income tax exemption limit from Rs 150,000 to Rs 175,000 and restoration of the standard deduction of upto Rs 20,000 would be welcome. Business taxpayers, however, should not expect a bonanza of tax holidays. Despite the slowdown, the case for these is weak. “Tax breaks are unlikely to stimulate adequate private expenditure, and the net result would only be a revenue loss,” warns Mazumdar, “These losses then tend to make government expenditure expansion even more difficult.”

Don’t forget, Pranab Mukherjee is faced with a revenue challenge. In a year that overall tax collections are expected to fall on account of the business slowdown, he may have no option but to adopt an agenda of bold tax reforms. To boost revenues, for example, he might need to go for an overhaul of indirect taxes—the institution of a goods & services tax (GST), which will converge rates for all categories, ridding the system of distortions. The era of arbitrary tax rates must end for special favours to be contained.

Of course, there is always the fear of revenue unpredictability. But the experimental leeway that Pranab Mukherjee has is the fact that economists everywhere in the world, in response to the current financial crisis, are no longer glowering at governments that are expanding their fiscal deficits. State spending is in vogue, worldwide. At other times, a fiscal deficit headed towards double digits would have alarm bells being rung by the IMF and credit rating agencies. Not anymore.

But fiscal consolidation was never meant to be something done under global pressure. For a market economy, it is a worthy pursuit in itself, notably in making space for private enterprise and efficiency. An economic revival would have to go hand-in-hand with action on this front—a deficit target of, say, 4 per cent of GDP in 2010-11. Even in the second half of 2009-10, depending on business confidence and investment, some careful calibration (the ‘exit policy’ central bankers speak of) might be needed to contain inflationary pressures that would accompany an upturn.

If the Indian stock market has been exultant at the UPA’s electoral victory, it is also partly in the hope that reforms would include disinvestment—a dirty word under the Left-backed regime—in state-run businesses. Says Atsi Sheth, chief economist, Reliance Capital, “Any indication that the government has a serious disinvestment programme will be welcomed.”

Pranab Mukherjee refuses to reconstitute the defunct disinvestment ministry, a creation of the NDA, but the government may discover some logic in reducing its stake in profitable public sector units (PSUs) and using the funds to shore its own finances up. The NDA government raised close to Rs 30,000 crore through the outright sale and equity dilution of more than 25 PSUs. Now, according to Prithvi Haldia, chairman, Prime Database, there are other units that can help the government raise funds. He estimates that there are more than 60 PSUs in which even a 10 per cent equity dilution could fetch nearly Rs 100,000 crore. A market upswing will only help.

Apart from that, what would cheer capital markets is the direction of a large chunk of people’s retirement savings towards equity markets via the Pension bill (something the Left bitterly opposed), though recent asset volatility may have turned fund managers cautious once again. Also expected is further liberalisation of the insurance sector, which has been awaiting a change in its foreign investment cap. Meanwhile, the much-needed deepening of debt markets could go a long way in easing troubles in the financial sector. Allowing more foreign investment in banking, on the other hand, is unlikely for reasons that have dominated headlines globally.

For foreign investment in such sensitive sectors as retail and telecom, perhaps the Centre will sort out the ‘beneficial ownership’ maze it set up in February, giving multinationals clearer access. As for that other hot potato, labour reforms to make the job market more flexible, it’s best discussed in hushed tones. Even without the Left.