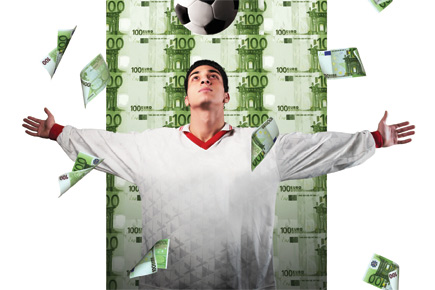 
The commercial deals around this year’s edition of the Fifa World Cup are expected to generate cash to the tune of $3 billion for football’s global governing body. For global megabrands like Coca-Cola, Budweiser, McDonald’s, Adidas and Hyundai, being associated with the world’s biggest sport festival is not just a matter of prestige but a great way to reach virtually every nook and cranny of the world. After paying for all expenses, Fifa would make a profit of more than $1 billion.

While Fifa would like to call it ‘profit’, for football enthusiasts, it’s the added corpus it gets to extend the game’s gospel in countries such as India and China. The 2006 World Cup held in Germany had an operating budget—for staging the event, not inclusive of capital infrastructure costs—of €430 million. And the German Football Association raked in the bucks, announcing a profit-before-tax of €135 million on the grand event.

No doubt, football forms the world’s largest sporting economy. But Fifa has a big problem. The world’s second most populous country, and fastest growing market democracy to boot, resolutely refuses to display the requisite football mania to ensure expansion well into what many think will be ‘Asia’s Century’. Globally, the football economy is alive and kicking. In cricket-crazy India, it can’t seem to get past pre-natal kicks. Football’s commercial viability in India may even have taken a few steps backwards in the last five years. In 2002, when the event travelled to Asia for the first time, the signs were fairly encouraging. It was an ideal opportunity for aggressive Korean chaebols like Hyundai, Samsung and LG—all relative new entrants to the Indian market—to hardsell their Korean heritage. With increasing affluence, global integration, and an ever greater number of children in upper-middle-class neighbourhoods not just taking up the game, but also spending on overpriced international merchandise such as Messi jerseys, you’d expect the trend to be especially upwardly inclined.

Alas, not. The mood at a recent daylong seminar held in New Delhi to discuss prospects of boosting football’s commercial viability in India, is telling. Not a single representative from a big advertiser like Hero Honda, Nokia, Bharti or Adidas was in attendance. Nobody got fired for buying cricket.

Yet, data from TAM, a firm that measures TV viewership, suggests that football has gained significant ground. There has been a 60 per cent jump in TV audiences since 2005, with a total universe of close to 83 million viewers in the A and B socio-economic classes, as classified. The popularity of the game, not surprisingly, is the highest in the eastern region, and Kerala. The average TV rating for a football World Cup match in 2006 was close to 2.3 per cent, roughly the same as it is today for an ODI cricket match between India and Sri Lanka. But, oddly, it doesn’t translate into revenues for broadcasters.

Ten Sports, now part of Subhash Chandra’s Zee Network, owns the rights to the popular Uefa Champions League, but its CEO Atul Pande says that hawking football advertising airtime in India is a tough job. “We formed a separate sales team to market football—both international and domestic matches. The clients are so dismissive of the sport that members of the team were disillusioned to the extent that some of them even quit the company,” he laments.

The success of cricket’s Indian Premier League has made things worse for football, as the 45-day star-studded event soaks up most sports-aimed advertising. Although ad rates for cricket matches in India cannot be compared with any other, leave alone football, the apathy of advertisers is still remarkable.

“No one wants to listen to a media plan involving football,” says Ravi Kiran, CEO, Southeast and South Asia, Starcom MediaVest Group, a large media buying agency. “Typically, a client would be more than happy to spend up to Rs 20 crore on a cricket series and will spend an enormous amount of time and energy to make that investment work out on the ground. But the minute we propose an investment of even Rs 10-15 lakh on football, they’d virtually throw us out of the room.”

To add excitement to their football telecasts, Ten Sports tried to run SMS contests and assorted interactive games that would pump-prime viewer interest. “There’s so little traction that we wouldn’t get even 40 SMS responses,” reveals Pande.

ESPN Star, which owns the region’s TV rights for this World Cup, has been trying hard to promote the event with high-decibel ad campaigns, and has tied up with DTH operator Dish TV to provide high-definition match telecasts, but the commercial takings remain piffling. In 2006, ESPN Star claimed that it was selling ten-second advertising spots for Rs 80,000 to Rs 100,000. This year, in contrast, media planners say the going rate is much lower despite the fact that half the games would start at an India-friendly 7.30 in the evening, like IPL matches. Are advertisers missing a bargain?