Stamped and Cast Aside

Come 2010, mobile phones and emails will have taken another victim. India Post will no longer extend the licences of letter writers 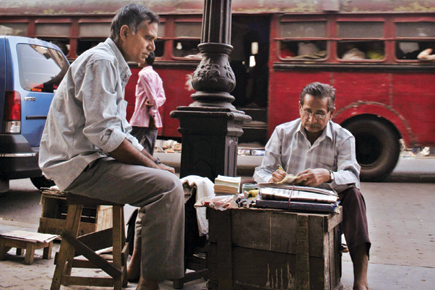 Come 2010, mobile phones and emails will have taken another victim – the professional letter writer


In a barren courtyard near Delhi’s busy Kashmere Gate Post Office sits a bespectacled man. He sits alone with his memories, watching people on their way to the post office. It wasn’t always like this. Now 55, JC Sharma was once a man people would elbow others to speak to. These were people in large numbers, and they came from the far reaches of Delhi, sometimes even farther. For he had a skill that was keenly sought after.

Sharma would lend his clients an ear, and pen letters on their behalf to be posted to their loved ones—with whom this correspondence was their sole medium of contact. It was a job of intense personal empathy and social value. After 25 years of perfecting his art, of connecting people through the intimacy of the written word, he sits forlorn—even his thoughts to himself at risk of being drowned out by the clamour of cellphones and traffic.

There are many who share his fate. Scribes of succour once, forgotten today. As if lost custom was not enough, India Post has stamped down on their trade, postmarked ‘obsolete’. The Government’s postal service has decided not to renew their licences which allowed these letter writers to sit within post office premises.

“They have become relics of the past,” explains Brig YPS Mohan, deputy director general of operations, India Post, Delhi, “With increasing literacy and the communication technology revolution, their role has become obsolete. Hence we have planned not to renew their licences at the end of 2009.”

Many like HR Khan, who has been sitting outside the GPO near Mumbai’s Chhatrapati Shivaji Terminus for the past 35 years, and Sharma in Delhi, are resigned to the inevitable. The advent of mobiles and the era of the Internet have brushed them aside. It is simply the force of modernisation. Unstoppable, often ruthless.
Sharma is not in denial. “Today even the unlettered migrant worker, the one who used to be our most loyal customer, knows how to use a phone,” he acknowledges, betraying little emotion.

By way of consolation, they have memories of the days when their pens were called upon to bear witness to a swathe of human affairs. They inked paper with everything from harmless messages of well-being to incandescent words that could shake governments, from communication of trivia to impassioned letters that could stir emotion in the hardest of hearts.

They remember the long queues on salary days, when they would start work at 6 am and keep their fingers moving for more than 12 hours at a stretch—without even a lunch break. Most of these payday letters were quite simple, bearing straightforward instructions on how to spend the money.

“In fact, most letters used to be so dry that we would put in some well meant tidbits like ‘give my greetings to the children’ or  ‘maa ko pyaar’ [love to mother] which would make recipients happy,” says Dileep Pandey, 28, who has been sitting at the Mumbai GPO for ten years now.

It was a job done in the strictest of confidence. They were privy to the most poignant of stories, and they kept the secrets safe, as a badge of honour. “Most labourers would be working in abysmal conditions and would yet always send letters home saying they were doing well,” says Khan, “We respected that and never pushed them to divulge such details to their families.”

Over time, the professional exchange of words would come to forge a much deeper, unspoken bond between the correspondent and scribe. Pandey recalls how an ageing mill worker once asked him to write a letter to his wife in the village about how much he was missing her. And from then on, the worker would come to Pandey regularly to get his messages across. “He hasn’t come in a long time,” he says, “maybe he has gone back to his village. But everyday I hope that chacha (uncle) will come to visit me.”

Mumbai’s red-light-area workers still come to Pandey to have money sent home. “They have the confidence that if written by me, their letters will read well and reach their families faster,” he says. These clients often ask their letter writers to draft details of fictitious jobs—as cinema extras or shop hands. It’s a delicate job remembering all this, knowing full well what their real living conditions are like.

It wasn’t just letters to families that they wrote. They even had to pen complaints to government officials or petitions to political parties. “Some of these workers would come with complaints that the police had arrested them on false charges that they were doing drugs,” says Sharma.

It wasn’t only illiterates who turned up. Many regarded letter writing a skill specialised enough for it to be done by a professional. After all, good letter writers could sort out many a tangle, convey many a regret and arouse many an emotion. Such craftsmanship commands loyalty.

At times, such scribes were forced to be translators as well. Khan and Sharma often had to deal with Bengali- or Tamil-speaking workers. They would speak to us in broken Hindi and we tried our best to understand them, they say.

Though they held their clients in high regard, they had strict dos and don’ts. Jayraj Singh, who has been writing letters for more than 25 years in Kolkata, was once approached by a man to write out a talaqnama (letter seeking divorce). “He wanted to divorce his wife who was in some village of UP, but he wanted to give out the sender’s address as mine,” says Singh, “He offered me Rs 100 but I refused as I didn’t think it was ethical.”

Writing love letters had its own set of principles. Amorous letters to girlfriends were taken in good humour, but if an affair went awry, angry words would never be committed to paper on anyone’s behalf.
It was a job that grew on people. Take Sharma’s story. A graduate of Delhi University’s Hansraj College, he did a stint with the Railways and then worked in Japan. “I came back and helped set up the family business,” he says, “which unfortunately ran into severe losses.” However, he soon started enjoying his role as part writer and part confidant to the workers of Old Delhi.

There are others like Singh who saw it as a big opportunity. “I even turned down offers from the Army and the port trust because the salary was only Rs 1,200 a month,” he says. During peak season, it was common to take home daily earnings of Rs 500 from about a hundred clients.

All that’s history now, as they fight for their future. “I consider myself lucky if I make even Rs 100 a month,” says Bashir Ahmed, who has been writing letters in Kolkata since 1968. Perhaps they can become email scribes in far-flung places, once Internet penetration deepens. For now, they just want to give their children a better life.

Sharma is keen that his daughters do well. “Five of them are still in school and two have found good jobs,” he says proudly. Singh, meanwhile,  has bought a small shop in Durgapur and hopes to have enough money for his daughters’ weddings. Pandey has become an LIC agent. He is glad that the Indian economy is growing fast, but is also sad that skills like his are being thrown aside. “But then,” he adds, “one has to move on and find one’s own niche in this world somehow.”