Smoke signals in a seller’s market

In an arena where action is rare, ITC may yet have the Subtle Mover’s advantage 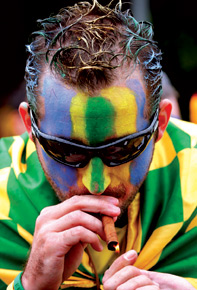 In an arena where action is rare, ITC may yet have the Subtle Mover’s advantage

In matters of excise-vexise and tax-wax, paanwaala wisdom has only one item of certainty year after year: a hike in excise duty on—don’t hold your breath—cigarettes. And sure enough, India’s Union Budget for 2014-15 has done its bit, and then some!

What piques my interest as an observer, however, is the response of ITC Ltd, the company that markets almost every big brand of smokes in India. ITC appears to have rather few listeners for its old argument against ‘a discriminatory regulatory regime [for] cigarettes’, as its latest annual report puts it. Meanwhile, it has diversified itself admirably over the years. It now sells snacks and staples, cookies and confectionery and skirts and shampoo with élan enough to rattle MNC rivals. As a business, its aim has a clear focus: unstubbability.

Yet, for most of its money, ITC still depends on cigarettes, a market where its customer must shell out more and more every now and again. By the tenets of Marketing 101, if anyone is asked to pay more, he or she ought to be offered more as well. Smoking may be a habit, the nub of its gratification open to Freudian analysis, the gratified customer almost captive, but so what? More is more. Except that upping nicotine, tar or any of that ugly sludge is out of the question. And filter technology isn’t getting any better.

So what does a company like ITC do? Well, late last year, it had something of a brainwave. After giving Gold Flake smokers a mid-fiscal price shock, it came out with a ‘limited edition’ of the brand, its tobacco twirled with global flavours for a change. It began with Greek and Turkish packs, but it unveiled its big head-turner only this summer.

Ah, yes, its Brazilian blend! ‘Honeydew Smooth®’ says the pack, as always, four words that need not even be spoken aloud for patrons to do Pavlov proud. Flip it open, and out slips a message with its foil: ‘Explore a new world of flavour. A blend created with fine Brazilian tobaccos to give you an unmatched Honeydew Smooth® smoking experience.’

Package inserts seldom get slicker than that. And it’s proof that ITC has not been too lazy in a seller’s market so utterly unfamiliar with product innovation that buyers see price hikes as acts of extortion.

So why hasn’t Gold Flake fanned out across the market with its new blend? After all, ‘Brazil’ is all the buzz nowadays, having gone down so emphatically in an epic game of soccer. What’s more, the brand has a flavour proposition that’s about as heady as it gets.