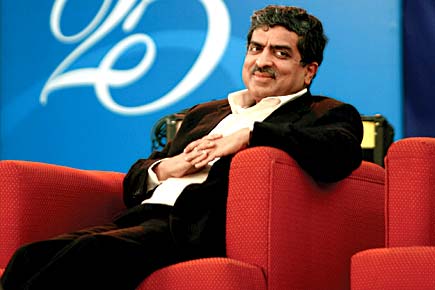 
On 9 July, the final day in office for Nandan Nilekani who co-founded software giant Infosys, a long line of employees stood outside his corner room at its headquarters in Electronics City, Bangalore armed with mobile cameras and bouquets to click keepsake pictures and wish him luck in his new job. The co-chairman of the 28-year-old company famously said: “My only identity has been Infosys.” And he added that in leading a programme to give identity to every Indian, “I am losing my identity’’. While his senior colleagues gave him an encouraging send-off, most womenfolk, including some directors’ wives whom he had known for long, wept openly. Nilekani’s 80-year-old mother, Durga, also made a rare appearance. Aditya Jha, head of global branding and corporate marketing, told Open that it was great for Infosys that Nilekani had been chosen to lead such a large, complex and daunting project. “All Infoscians are taught to put the company first and are encouraged to sacrifice everything for it. Here, we are proud to put the country before company and let him go for a larger cause. I am sure he will do it and do it well.’’ Nearly 100,000 Infy employees across the globe watched the webcast of the event live and heard their former boss stating clearly the challenges ahead of him. “In my new role, I am supposed to work with 600 government departments knowing fully well that no two government departments get along.’’ From his new perch, he promised to watch the company as it grows. While the media was kept out of this ‘family’ affair, Nilekani said his only regret was that he would not be there when colleagues would soon be driving to work on the new elevated highway that will link Electronics City directly with the city’s suburbs. There could be more goodbyes at Infy with the former head reportedly looking to poach talent.