And to think he hit upon the internet almost by accident on a trip to America as an interpreter! 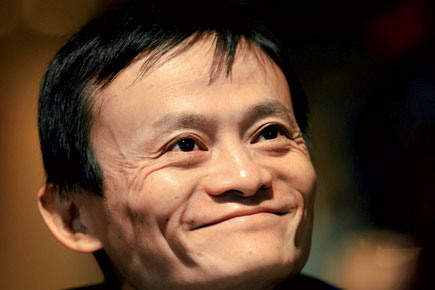 And to think he hit upon the internet almost by accident on a trip to America as an interpreter!

About two decades ago, the only one talking about ‘Jack’ and the internet was HCL, the Indian infotech company. Inspired by Forrest Gump’s ‘fruit company’ Apple, it had this idea of a home computer called Beanstalk that would grow and grow and grow, taking Jack the Consumer on an endless adventure in cyberspace. The internet was just an odd curiosity then, HCL’s leafy dream didn’t get far, and it’s Jack the Billionaire and Alibaba’s forty leaves that have made off with the online bounty.

Alibaba’s Initial Public Offer of shares at the New York Stock Exchange has got Jack Ma’s Chinese e-com company a stupendous $25 billion from investors, making it the world’s largest such equity sale ever. And the stock’s value in early trading has shot up so sharply that Jack Ma’s own stake has placed him in the glare of global attention as China’s richest man.

Founded in 1999, Alibaba.com, the come-ye- come-all e-trade website that started it all, was just about a year old when I bumped into Jack Ma at the turn of the millennium at a Pragati Maidan fair in Delhi, and he smiled impishly as I marvelled at the genius of his brand choice. That he had worked out what the internet’s big market effect would be—disintermediation— was obvious. For a market to be efficient, information needs to be clear and transaction costs low, and in a country of cobwebbed commerce, he knew what wonders could be worked by putting data on open record and buyers directly in touch with sellers.

That he’d have a quarter of a trillion dollars worth of deals done on his web platform in less than 15 years, however, did not seem even remotely possible at the time. Well, whaddyaknow, it’s happened. The boom lately has been on his Taobao.com website, which has millions of consumers logging on every day to buy stuff with the aid of Alipay, his e-payment system.

And to think he hit upon the internet almost by accident in 1995 on a trip to America as an interpreter! Back in his hometown of Huangzhou, he had been a teacher of English, a language he picked up mainly off radio broadcasts. Getting into college had been a struggle (he failed two attempts), and he was ungeeky in almost every other way as well. By all accounts, he remains infotech-aloof. He hardly ever surfs the web, is said to use his iPad only to watch American TV shows, and prefers to spend his free time on stuff like Tai Chi, a martial art he appears to take seriously for reasons other than his light frame. He is also said to play poker, which, given my memory of his general geniality, seems somewhat hard to believe.

But then again, perhaps he revels in inscrutability. It certainly lends him a charisma few can resist. His favourite movie is Forrest Gump, reportedly, which he has seen ten times, the last time just before leaving for New York for Alibaba’s debut. “I watched the movie again telling me that ‘No matter whatever changes, you are you’,” he says in a CNBC news clip of the day, “I am still the guy 15 years ago, you know. I only earn like $20 a month.”

Jack Ma has had several other interesting things to say. A couple of years ago, he spoke of a need for people in China to “learn what democracy means” in the context of his company’s decisions on philanthropy being taken by a panel elected by employees.

Of late, what Alibaba itself has had to learn, though, is what competition means. While the company has well over two-thirds of China’s e-com market to itself, it faces a challenge in the shape of Tencent, which has surfed its way into play on waves made by its social media network, Weixin (literally ‘micro message’). Since its 2011 launch, this service has been a craze among China’s youth, gone global as WeChat with Rolling Stonish iconography, and become the day’s wake-up app—a crucial gateway to the internet, mind you—for users by the million enough to play deal stealer. Most of its users are of a generation that values intimacy and immediacy online. And that is exactly what Weixin is essentially about. It is not, as some sneer, a WhatsApp copy that is shielded from the real thing of America by the Great Firewall of China. Its youth appeal lies in hot lay features such as Look Around, which identifies contacts closeby; Drift Bottle, which floats out a message for random retrieval; and Shake, which lets phone shakers vibe discreetly with one another.

Marketers are already adopting Weixin as a promotional platform. And now, as Tencent CEO Pony Ma leverages a social app for e-com, Jack Ma may have to mix metaphors and fairytales in new ways to keep Alibaba ahead.