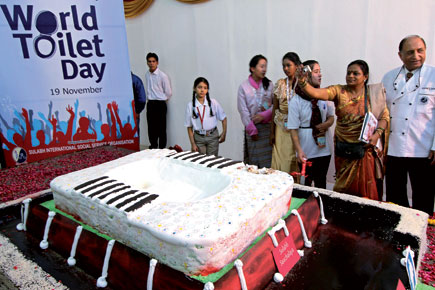 When a 700-kg Indian-style toilet-shaped cake made an appearance in Delhi last month, it seemed that toilets had finally arrived on the big scene. The giant cake prepared by students and faculty chefs at the International Institute of Culinary Arts in Delhi was commissioned by Bidheshwar Pathak of Sulabh International, popularly known as ‘Toilet King’ in India, and was displayed at the Constitutional Club in Delhi on the occasion of World Toilet Day.

With pictures of the strawberry and chocolate cake generously dotted with dry fruits being cut by the King surrounded by a motley crowd of city politicians and school students popping up in newspapers and social media platforms, Pathak and the staff at the institute are now looking at being listed in the Guinness Book of World Records for having prepared the world’s heaviest cake. An elated Pathak says that two or three years ago, even the thought of a cake in the shape of an Indian style latrine would have evoked revulsion. “This is all because the Prime Minister of India decided to pick up the broom himself,” says Pathak, who in 1970 founded Sulabh International, a non-profit outfit that now runs over 10,000 units of pay- and-use toilet facilities across the country. “With the Prime Minister bringing up the issue of sanitation on his diplomacy visits abroad and launching the Swachch Bharat Mission, sanitation has become a key point in India’s agenda, enough for us to have a cake that resembles an Indian style toilet made and be photographed having mouthfuls of it,” he chuckles.

The Swachch Bharat Abhiyan was launched by Prime Minister Narendra Modi on 2 October this year at Rajghat, when he himself took up a broom and swept a street in a Valmiki colony, home to safai karamcharis (sanitation workers). The campaign, aiming to enrol at least 3 million government employees and school students, not to mention building 1 billion toilets by 2019 in rural areas and schools, is estimated to cost over Rs 1.9 lakh crore and aims to put an end to open- air defecation in India in the next five years. As per World Health Organisation (WHO) estimates, of the 1 billion people in the world who have no access to toilets, about 600 million live in India.

Apart from the Prime Minister setting the agenda and the large budget, wielding a broom himself and nominating celebrities like Sachin Tendulkar, Salman Khan, Anil Ambani and even Baba Ramdev to the campaign, the Government has also set up the Swachch Bharat Kosh for big and small corporations to contribute funds to the cause as part of their Corporate Social Responsibility (CSR) responsibilities.

This seems to have created a stir in India Inc, with both corporates and private entrepreneurs expecting a new lease of life in the sanitation sector. While industry body Assocham has urged its 400,000 strong membership to ‘find an opportunity’ and look at working on solid waste disposal mechanisms in Tier I and Tier II cities, small time entrepreneurs are already looking at the initiative as changing the approach and parameters of sanitation and business in the country.

According to Namita Banka, founder and CEO of Hyderabad-based Banka BioLoo, the Swachch Bharat campaign is ‘exciting’ for private entrepreneurs like herself. “Sanitation is like a revolution in India. Of course it does not take only one person to bring about change, but with the Government talking about toilets and sanitation, it has clearly rolled out great scope for our market,” says the 41-year-old Banka, who formerly worked as a jewellery designer in Surat. The now Hyderabad- based entrepreneur was the first person to have secured a licence, two years ago, to commercialise the bio digester technology developed by India’s Defence Research Development Organisation (DRDO), meant to convert human waste into reusable water and gas in the extreme climes of Siachen. As Banka explains, the technology works on the basis of anaerobic digestion in which micro- organisms break down the waste in the absence of oxygen. The bio-digester tank, which can be replenished with inoculated bacteria, can be attached to the toilet unit.

While her start-up has been working with the Indian Railways and infrastructure companies that build schools, with DRDO issuing a licence to organisations such as Wockhardt International, Banka BioLoo had been expecting serious competition. Other small-time firms like Master Plannery in Bangalore are looking at producing cost-effective pre-fabricated units in rural areas. “The key to this technology is pre-fab installations that even a layman can set up using simple nuts and bolts, and can be used in water-borne, chemical as well as biological systems of pit latrines,” explains the firm’s proprietor Anand Kumar.

Even though India has been following a Total Sanitation Policy since the early 2000s, the loss of GDP due to lack of sanitation and hygiene is still pegged at 6 per cent. As shown by research over the years, lack of sanitation facilities and the consequent illnesses cause stunt the growth of children and leave them malnourished. According to Dr Sideek Ahmed of Kerela-based Eram Scientific Solutions, the biggest hurdle so far has been that there ‘were no large corporate houses in India [that] would have any commendable investment in sanitation.’ Eram, which won the global ‘Re-Invent the Toilet challenge’ rolled out by the Bill and Melinda Gates Foundation earlier in March this year, has supplied over 600 ‘e-toilets’ to 13 states since Ahmed, an entrepreneur with businesses in Middle Eastern countries and the UK, decided to set up Eram in Thiruvananthapuram four years ago. The e-toilets, as explained by Ahmed, use water thriftily and are standalone units that open on the insertion of a coin. The user is even directed through voice commands, and water usage is automated. While the company currently caters only to municipal corporations, it is now looking at rolling out commercial models with options for recycling. “While a project like Eram seemed laughable then, it now only sounds like a smart business to take up,” says Ahmed.

The business opportunities ahead are “mind-boggling”, according to Sudip Sen, vice-president of the Kolkata-based Stone India Ltd, which has recently bagged a Rs 2 crore project for the Delhi Development Authority to set up bio- toilets across parks in various parts of Delhi, and from the Kerala government to install bio-digesters on house boats in the backwaters. The bio-digester technology was developed by the 80-year-old company that supplies hi-tech precision engineered components to the Railways; with the help of the Government of India, it has started supplying toilet units to the Railways as its first client. The firm, says Sen, is now eyeing projects in girls schools and urban slums where community toilets are essential.

It is not just the hardware industry that is seeing a boom. With the Government encouraging CSR investment in the initiative, companies like Reckitt Benckiser and Dabur have also jumped on the bandwagon to sell their products in aid of the Swachch Bharat Abhiyan. While Reckitt has pledged Rs 100 crore to the initiative and signed up actor Amitabh Bachchan as brand ambassador for Dettol to promote the idea of hygiene and sanitation in 400 villages across Uttar Pradesh, Bihar, Jharkhand, Madhya Pradesh and Maharashtra, Dabur is leveraging the concept to promote its cleaning agent brand SaniFresh under the tag-line of ‘Swachch Toilet, Swachch Bharat Abhiyan’. While the company has identified areas near Ghaziabad, Uttar Pradesh, to build 50 toilet units for girls, it has also pledged Re 1 from each sale of SaniFresh towards the cause.

Even Facebook’s Mark Zuckerberg has offered the Indian Government help by developing an app for ‘Swachch Bharat’ (perhaps sensing its popularity with stars and celebs that are supporting the cause and uploading their photo-ops online). Local players, however, have already beaten him to the punch. Several apps are doing the rounds online, one of them being Swach Bharat by Abhipray Foundation that was created for the Delhi BJP team to record the progress of its MPs, MLAs and councillors on the campaign in their respective constituencies. I-Clean India, which has an operational link with Bangalore Municipal Corporation, is an Android app that allows users to share and geo-tag unclean areas in the city and invite friends and contacts on Facebook and Twitter to clean-up the area. According to co-founder Prukalpa Sankar, the app will help mobilise people who want to pitch in but don’t know how to. His start-up company raised Rs 2 crore this year and is looking at joining hands with other municipal corporations.

Amid the current fervour of the Swachch Bharat Abhiyan, Avinash Kumar, programme director at WaterAid India, a firm that works in the fields of sanitation and hygiene in India, cautions against the campaign being reduced to a Page 3 event. “It is great that the Government has managed to create interest and a stir, but we have to keep up with the realities around,” he says. According to Kumar, the campaign is not only about wielding a broom and uploading a picture on Facebook or building rows of toilets. “It is way more complicated than that,” he says, “We need to look at solid- waste management and disposal schemes. Even Delhi sewage treatment is managed only for half of the waste produced, and that’s where private corporations can pitch in.” Kumar claims that nearly 80 per cent of the toilets built as part of the Total Sanitation Campaign in the past are either just on paper or remain unused, and that the key learning from past mistakes is that the Government needs to invest in human resources. “We need to make people use them, independently monitor the construction of these units, and also educate people. Investment in human resources is more important than building hardware and that’s where the private sector should be tapped,” he says.