Jaypee says they are all set to flag off Formula 1 races in India this October. That would need them to hurtle down a path riddled with speed breakers 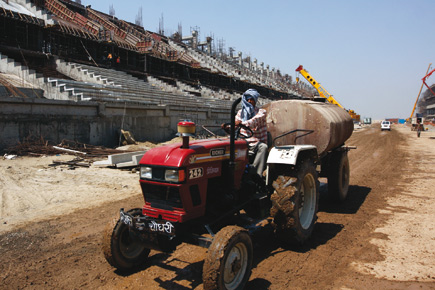 Jaypee says they are all set to flag off Formula 1 races in India this October. That would need them to hurtle down a path riddled with speed breakers


If you stand at the finish line of the Jaypee Greens Formula 1 track in Greater Noida, near Delhi, to the right are huge grandstands and to the left is a pit row, a massive warren of concrete garages that will allow teams to change tyres and oil in about four seconds (the typical pit stop). From here, the checkered flag will wave vigorously as 24 drivers rev some of the world’s fastest cars down the 5.1 km track. Further down, there are food courts, five-star hospitality—an aspirational catch-all for concessions that separate the wealthy from their hard-earned rupees—and kid zones for youngsters who tire of watching 1,000 horsepower single-seaters fly from one end of the course to the other. There is even an F1 simulator for adults to channel their inner Lewis Hamilton.

And if you think that’s something to behold, a Jaypee PR guy tells us, “It’s amazing to go to the highest elevation [of the track].”

“It’s amazing to see,” he repeats.

Moments later, a red sand twister blows over us, coating the air in crimson dust, and revealing an uncomfortable truth. Right now, the dream track only exists as a scale model at Jaypee Sports’ office about 10 km away. As if to reinforce the point, a hoarding on the road out of the racetrack arena reads: ‘Jaypee Group: No Dream Too Big.’ To make sure they are ready for the inaugural F1 race on 30 October, they have 6,000–7,000 workers layering themselves with dust on a construction budget of $340–350 million. And company spokespersons have us believe Jaypee will have no problem pouring enough of their eponymous cement to make their July deadline, when F1’s governing body will rubber stamp their dream circuit. This seems hard to believe, though, staring at what to my untrained eye looks like a half-complete track.

There is, of course, this other small speed bump in the whole India-as-an-emerging-superpower-coming-out-party-tied-to-a-world-class-sporting event narrative: Kalmadi, Suresh.

Kalmadi became last summer’s villain in a scandal that played out daily on the front pages of the capital’s broadsheets. He seemed an amalgam of everything that’s wrong with the bureaucracy: as corrupt (allegedly) as he was arrogant (fact). And just in case Kalmadi couldn’t botch up the entire Commonwealth Games on his own, he assembled a cast of equally smug accomplices. “Everyone has different standards about cleanliness,” CWG spokesman Lalit Bhanot famously quipped, “Westerners have different standards, we have different standards.”

Things, as you may have read, did not end well.

As of press time, Kalmadi and his coterie were visited by the CBI and CVC to examine 40 CWG projects.

Perhaps that’s why when we visit the Formula 1 field office, wedged between Jaypee Greens’ sprawling athletic centre and their brand new 18-hole golf course, we are told that all the technical specs for the course are available online. One official labours the point that “Jaypee Sports is a wholly-owned subsidiary of the Jaypee group. There is no outside investment, there is no government involvement, and it’s a completely private enterprise. And contrary to some reports you might have read about the Kalmadi family being involved, those reports are completely [false]. I have reiterated it time and again. We’ve even sent legal notices to some people who have said this in the past. This is a completely, fully, 100 per cent Jaypee-owned subsidiary.”

“Have they been associated in the past?” my colleague asks. “They have not.”

So why does the same report keep getting printed then, I ask, citing a 2009 Indian Express article that reported Suresh Kalmadi’s son Sumeer Kalmadi’s 13 per cent stake in the project.

“I have no idea,” he says, pleading ignorance.

Few sports represent the lifestyle of the rich-in-the-thrall-of-thrills as well as F1. From its beginnings in 1950, its single-seater cars have offered Europe’s leading auto manufacturers a chance to indulge in speeds not possible even on German autobahns. Part of F1’s appeal is the risk, which seems borne out by the fact that iconic drivers like Brazilian Ayrton Senna died on the track.

But it’s been a rough few years for F1. In 2005, private equity firm CVC Capital Partners bought a controlling stake of 63.4 per cent in Jersey-based Delta Topco, the holding company that controls the commercial rights of F1. Private equity firms often borrow money on the back of an asset—in this case F1—and pay themselves dividends. This creates huge debt loads for the company.  In late February, Gerhard Gribkowsky, the banker who helped F1 finance the deal, was arrested and charged with taking a $50 million kickback to facilitate the $2.8 billion deal in 2005. It is believed to be the biggest bribe in German history.

So, in spite of the fact that F1’s most iconic courses are still on the Continent—Monte Carlo’s street circuit, England’s Silverstone and Italy’s Monza, the fastest track in the world—this hobbyhorse of Europe’s wealthy has looked east to solve its financial woes. New additions include Abu Dhabi, Bahrain, Singapore, South Korea and China. In exchange for the estimated $35 million per year in track hosting fees, rapidly modernising yet decidedly autocratic Asian regimes have availed themselves of F1’s cache.

India differs from many of the other recent Asian F1 additions in one crucial aspect. The country has had a history of motorsport of sorts, centred in Tamil Nadu. In fact, the state has produced two F1 drivers currently on the circuit. Narain Karthikeyan is a starting driver for the Hispania racing team, and Karun Chandhok is a reserve driver for Lotus. And India’s best known F1 fan Vijay Mallya—of Kingfisher fame—even sponsors the Force India team. (Despite the name, the team is based in England and features two European drivers.)

Englishman Mark Hughes, who was brought in by Jaypee to run the Indian track, was pleasantly surprised by his time in Greater Noida. “While I was there, a huge number of people wanted to know how they could get involved,” says Hughes, who shifted to Abu Dhabi’s Yas Marina Circuit in November but still informally advises Jaypee. “The Indian federation has had a huge response and they are now asking for volunteers to marshal.”

One of those prospective marshals is 32-year-old Kuber Saraogi. On race days, he and his brother Varun, 36, are among 100 or so diehard fans who gather every week for the F1 race at Pebble Street bar in Delhi’s upscale New Friends Colony Market. A few hours earlier, these fanatics had packed this pub-cum-sports bar to watch the Australian Grand Prix.

On a recent Sunday, the Saraogi brothers quaffed pints of imported beer alongside owner Ashish Ahuja; all three attired in Ferrari shirts—the Saraogi brothers in red ones and Ahuja in a grey tee. Seated at a table in the middle of the main room, Ahuja admits there is a long way to go.  “This is still a niche sport,” he says. The key, he thinks, is to build the brand’s appeal slowly and focus on the country’s diehard fans first.

His F1 crowds are still dwarfed by the number of people he expects for the upcoming India-Pakistan cricket match. “I guarantee you won’t get a seat,” he promises.

It’s a fact that Mark Hughes also concedes. “I don’t think it will ever happen. I don’t think anything will ever touch cricket in India. And if I knew a way to make it happen, I’d be a very rich man.”

Even though F1 may never rival cricket in India, Hughes—who informally advises Jaypee—is confident that the event will be nothing like the Commonwealth Games. “Every Formula 1 circuit that was completed in recent years has been done at a record rate,” he says. “I think Bahrain was built in 16 months, Abu Dhabi in 16 or 17 months, Korea in a similar time frame. Korea had their inaugural Grand Prix last year. They were still laying the asphalt two weeks before the race. In that respect, India is actually ahead of the game.”