India has already eclipsed other BRIC nations in giving. But matching the US will take time 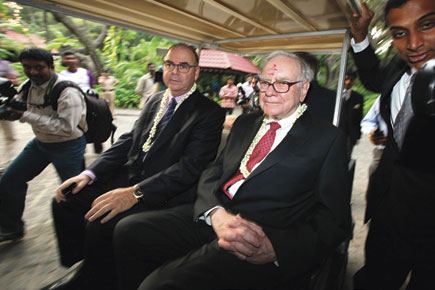 India has already eclipsed other BRIC nations in giving. But matching the US will take time


In December, Aziz Premji transferred $2 billion worth of his firm Wipro’s shares to a charitable trust. For Premji, India’s third richest man and head of one of India’s three top software firms, the announcement of the gift set a new standard for Indian philanthropy.

Philanthropy is a hot topic in India nowadays. On 22 March, Warren Buffett and Bill Gates touched down in Bangalore to promote The Giving Pledge, originally an initiative asking America’s richest to donate the bulk of their wealth to charity. So far, billionaires like Microsoft co-founder Paul Allen, Facebook’s Mark Zuckerberg and New York City Mayor and media magnate Michael Bloomberg have signed on.

India’s billionaires may follow suit. As Gates and Buffett arrived, GM Rao, whose firm GMR Holdings built Delhi Airport’s Terminal 3, pledged to give away the 12.5 per cent stake he controls in GMR to the GMR Varalakshmi Foundation, an affiliated charity.

India’s richest tycoons are indeed getting active in the realm of philanthropy. India has already eclipsed other BRIC nations in giving. According to a study last year by the consultancy Bain & Company, Indians donate the equivalent of 0.6 per cent of the country’s GDP to charity. Brazil and China, by comparison, give just 0.3 per cent and 0.1 per cent, respectively. “Philanthropy is an old concept in India, from daan, which is to give,” says Amita Puri, who heads the Charities Aid Foundation in India. “You have the tradition of established families like the Tatas giving away a great deal.”

But it will likely take more time to engender a climate of giving as robust as that of the US. According to the Bain report, an analysis of 30 high networth individuals (HNIs) in India showed that, ‘they contribute, on average, just around one-fourth of 1 per cent of their net worth to social and charitable causes’. The reasons for this gulf, says Puri, are structural. The infrastructure for giving in India is less developed than in Western countries, she explains. For regular middle-class people, she cites examples like the ability to donate at ATMs or when paying a bill.

For HNIs in America, charitable donations are 100 per cent tax deductible. Tax laws in India may not be quite so favourable. A proposed legislation worries Puri. “There is a draft Bill that has been tabled. It has proposed that the 100 per cent tax exemption [in India] be withdrawn,” she says. “Instead of looking at more ways that encourage people to give, this is actually a backward step.” Still, Puri says, Rao’s gift is cause for cautious optimism. “It will get people to think [about giving], but will need a lot more than just the visit to have people sign up [to the Giving Pledge] or give away [more money].”

Fomenting a culture of corporate benevolence takes time, the Bain report’s author Arpan Sheth explained during a presentation last year to the Indian Philanthropy Forum.  “Even the great philanthropists—John D Rockefeller, Andrew Carnegie and JP Morgan—did not give away their riches until toward the end of their lives.”