GM crops can be developed responsibly, as India’s public sector shows, but are anti-Monsanto activists listening? 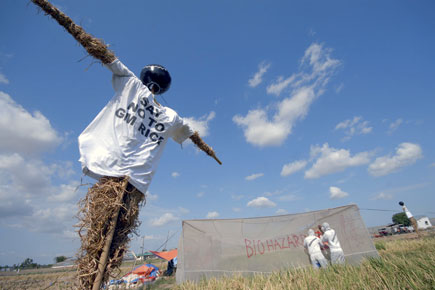 GM crops can be developed responsibly, as India’s public sector shows, but are anti-Monsanto activists listening?

In 2002, a team at the Hyderabad-based International Crop Research Institute for Semi-Arid Tropics (ICRISAT), a nongovernmental organisation working to boost agriculture in the globe’s dry regions, began genetically modifying the groundnut crop. They chose groundnut because it is an important subsistence crop in both India and Sub-Saharan Africa—many of the farmers who grow this legume also eat it. A crop failure not only affects these farmers’ incomes, but also, directly, their health.

There were several reasons the groundnut was a great target for genetic modification.

This crop is grown in the drought-prone districts of interior Andhra, Karnataka and Rajasthan, and it is not adapted to such dry conditions. When it does not receive enough rain, yields tend to get hit hard. The conventional way to get around this problem would be to hybridise a drought resistant variety of groundnut with one that is not. The problem, though, is that there aren’t any drought resistant varieties of groundnut in nature. Hybridisation techniques had hit a roadblock. But the droughts kept coming.

So ICRISAT’s researchers turned to a little flowering plant called Arabidopsis for help. This relative of the cabbage—the first plant to have its entire genome sequenced—has a gene that can fight dehydration. When faced with drought, a plant with this gene would conserve water much better than a plant without.

The team took this handy gene from the Arabidopsis and inserted it into the groundnut crop. Sure enough, they got a plant that would fare much better in Andhra’s hot summers. After about eight painstaking years of work, during which it was tested in greenhouses, the crop was finally ready for field trials.

By then, however, countrywide protests against Monsanto, a major global producer of genetically modified (GM) crop technologies, had reached a crescendo.

There are few similarities between public sector and private sector GM research. The allegations that anti-GM activists level against Monsanto and the private sector do not apply to ICRISAT and public sector institutions such as the National Agri Biotech Institute (NABI), National Botanical Research Institute, Central Institute for Cotton Research (CICR) and University of Delhi’s Centre for Genetic Manipulation of Crop Plants (CGMCP), all of which have GM programmes.

“Their ire is against Monsanto,” says Deepak Pental, who developed a genetically modified mustard crop at CGMCP, “but they are killing everybody.” Late last year, the Rajasthan government withdrew its go-ahead for field trials of Pental’s GM mustard, and burnt down one of the three fields where the crop was being tested.

The list of Monsanto’s alleged offences is long: activists say Monsanto carried out inadequate biosafety tests for its genetically modified Brinjal and then concealed the safety data, under the pretext of protecting its commercial interests.

Further, it forced farmers to buy expensive seeds from it year after year, by selling seeds that can be used only once. But more incriminatingly, the Bt Cotton sold by private sector firms such as Monsanto and Metahelix hasn’t fulfilled the promises it made. Yields have plateaued, and pesticide use has begun to rise again, contrary to what these firms originally promised. Even if these allegations are correct (they are strongly contested), public sector research shows that genetic modification is possible without these fatal flaws.

First, when institutes such as ICRISAT and NABI develop GM crops, the safety data on them can be accessed by anybody. “As far as I am concerned, I wouldn’t mind anyone analysing my data. If we are convinced our technology is not good, we would be the first ones to point it out. Tomorrow, if ICRISAT’s groundnut is commercialised, we won’t make a single rupee out of it, and the farmer will benefit because he won’t pay a single rupee extra in getting the GM material,” says Kiran K Sharma, who headed the GM groundnut programme at ICRISAT. Further, the seeds developed by ICRISAT are reusable by farmers, so that farmers do not have to go back every year and repurchase them.

In fact, the public sector works on several important crops that are neglected by the private sector. ICRISAT, whose core funders are the governments of various countries and the World Bank, focuses on chickpea, pigeon pea, sorghum, pearl millet and groundnut. All of these crops are difficult to hybridise and have small markets. And yet, they are crucial to farmers because they are subsistence crops.

But firms such as Monsanto prefer hybrid varieties of genetically modified crops because it helps safeguard their intellectual property. When a crop is a hybrid, the farmer can use its seed only for one season. In order to produce the seed for the next season, he would need access to both parent crops, which he doesn’t have. This forces farmers to buy new seeds each year. Such practices create a crucial market gap for straight varieties of GM crops, which only the public sector can fulfil. But anti-GM activism makes no distinction between the two.

ICRISAT and NABI are also developing nutrient enhanced crops to tackle the widespread dietary deficiencies that ail poor people. For example, nearly 70 per cent of pregnant women in rural India are iron-deficient—a large number of them die during childbirth as a result. This problem also afflicts children, especially vegetarians in low income families, who subsist on cereals, because vegetables are expensive. Supplementing diets with iron tablets often doesn’t work, because patients don’t stick to their regimens. To address this, NABI is now working on a genetically modified wheat crop with higher levels of iron. Simul-taneously, it is also developing a banana variety with higher levels of vitamin A.

Ironically, Bt Cotton, the stronghold of Monsanto, is another technology that would benefit greatly from public sector research. While anti-GM activists hold this technology responsible for the recent plateauing of cotton yields and high pesticide usage in India, the real picture is more nuanced.

According to KR Kranthi, director of Indian’s Central Institute of Cotton Research, Bt Cotton did in its initial years meet the promises of increasing cotton yields and reducing pesticide usage against the bollworm, the primary pest targeted by this genetic modification. The problem began because of the GM industry’s preference for hybrids. These hybrids are susceptible to sucking pests, against which they weren’t tested adequately.

Further, hybrids tend to need more insecticide, water and fertiliser due to their heavy foliage, and cannot be planted as densely as straight varieties. As a result, in the last five years, cotton yields have begun to plateau and insecticide use for sucking pests has grown.

China and Pakistan have been smarter than India in this respect. In his ebook, Bt Cotton Q&A, Kranthi writes, ‘China and Pakistan experimented with Bt-cotton hybrids, but appear to have decided in favour of straight varieties. The area under Bt-hybrids is negligible in these countries now. Thus, India happens to be the only country all across to cultivate hybrid cotton and that too, in more than 95% of its cotton area.’

It was the public sector in China and Pakistan that developed the straight varieties of Bt Cotton. But in India, CICR’s effort to develop a straight variety of Bt Cotton has ground to halt in the last two years. This variety, developed entirely by Kranthi’s team, uses a different Bt gene than Monsanto’s. But the government of Maharashtra has denied permission for field trials, even though there is no policy against testing Bt Cotton.

“Our whole team is very upset, “says Kranthi, “They have been working hard for years, late into the night. They ask, ‘What use is all this if you don’t even let us test it?’ We don’t even know if it works.” In the din of protests against Monsanto’s monopolistic practices, the value of GM research by the public sector has been completely ignored. “I went to one of the debates being hosted by Jairam Ramesh,” says ICRISAT’s Sharma, speaking of the public discourse at the height of the GM controversy in 2010, “90 per cent of the arguments were against multinationals; nobody was discussing real issues such as biosafety.”

Pental believes such an attitude will hurt public sector research, leaving the way open for the private sector to dominate the GM industry. “Monopolies will develop further if you don’t allow a public system to be created,” he says. “Thanks to this, our public research is poor; our biosafety regime is not sorted out. That’s what [multinationals] want.”

Scientists have cautioned time and again that genetic modification is not a monolithic technology. It is a set of wide ranging technologies, each of which varies in impact. Statements such as ‘All GMOs are unsafe’ have no meaning because each GMO differs from the other. As the editors of the scientific journal Nature noted in a 2012 editorial, ‘Even if one GM crop were to be shown to have serious adverse health effects, that would say little about others: the safety of any genetic modification depends on the crop and on the particular changes introduced.’

This is most telling in ICRISAT’s case. A big concern of anti-GM activists is that the introduction of GM foods will threaten biodiversity. They worry that if artificially introduced genes spread to wild relatives of GM crops through pollination, the wild crops may gain a survival advantage and proliferate uncontrollably.

The GM crop itself may also replace other cultivated varieties of the same crop, reducing diversity in the fields.

Even if these fears were well-founded (though scientists have argued they are not), ICRISAT’s groundnut is a prime example of a GM crop that carries very low risk of contamination. The groundnut plant is self-pollinating, which means that it mates with itself. Unlike plants such as wheat, its pollen does not travel to other nearby plants. In fact, during the trials so far, the ICRISAT team observed that pollen wouldn’t even travel a few centimetres away from the plant. “We got lucky,” says Sharma.

Further, there are several instances that show the public sector has been a responsible GM researcher. ICRISAT decided not to pursue genetic modification of the pearl millet because chances of it contaminating wild varieties were high. “Even though there were a lot of opportunities to work with pearl millet, we decided to stop until the regulatory framework was clearer,” says Sharma.

Meanwhile, NABI has branched off into a new line of research, aimed at removing the possibility of GM pollen flow altogether. One way to develop seedless fruits through this approach, for example, would be through grafting. While the rootstock, or lower half of the plant, would be modified genetically, the upper half grafted onto it, or the scion, would be unmodified. The root would then send the chemical signal of seedlessness to the scion, even though the scion would have no genetic modification. “You normally don’t eat the rootstock and it doesn’t make seeds and fruit. So this will control safety issues substantially,” says Rakesh Tuli, director of NABI.

To clump these diverse and well-intended genetic modifications under a homogenous category called ‘GM’ and then to label them ‘unsafe’ would be foolhardy. Each crop needs to be evaluated on a case by case basis. Pental says India is capable of carrying out such stringent biosafety evaluations. “The message is: develop good biosafety protocols and implement these properly. If doubts still persist, carry out post-release monitoring.”

To claim that we cannot introduce GM foods because we do not have the ability to test their biosafety in advance, according to Pental, is “a shameful situation for a country of 1.2 billion people.”