Enfield has a loyal following among classic bike enthusiasts in the US, going by web traffic 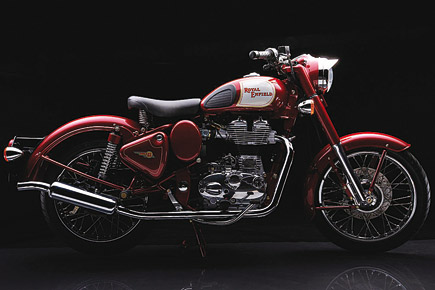 Enfield has a loyal following among classic bike enthusiasts in the US, going by web traffic

The bikes are part of a gradual rollout that over the next three years will include a Café Racer, a diesel-powered Himalayan Touring bike, and a parallel vertical twin model in the 650–750-cc engine-size range, which should play well in the US where bikers prefer larger engines for highway driving. Enfield has a network of dealers in 37 of America’s 50 states. The iconic Indian brand now has distributors in over 30 countries worldwide.

Enfield has a loyal following among classic bike enthusiasts in the US. There are about 3,500 people active on the message boards of Enfieldmotorcycles.com, website of the Minnesota-based US distributor. “A new Royal Enfield offers a true vintage experience at a price below that of a fine restored motorcycle, and it comes with a warranty too,” says David Blasco, a Florida-based hobbyist who runs RoyalEnfields.com, another fan site. “The price is less than what Americans expect to pay for a Harley-Davidson or Triumph.”

Enfield’s most popular model in America appears to be the C5, which retails for around $6,000 and is offered in both a classic and military design. The popularity of the military model makes sense. The bike, which is a holdover from the time when the company supplied the Indian Army, is marketed as a throwback.

These days, however, the company is 100 per cent Indian. Eicher acquired a majority stake in Enfield in 1993. In 1994, it changed the name of the company to Royal Enfield Motors Ltd. Still, Blasco says, “The Enfield is seen as a British motorcycle… One of the saddest things I see in ads for used motorcycles is sellers trying to pass off a Bullet, obviously made in Chennai, as being from Redditch, England [where the original Enfields were made].”

Blasco, however, makes it clear that he is proud to ride an Indian-made bike. “It is the real thing,” he enthuses, “it is the motorcycle India kept alive when England couldn’t—for 50-plus years. You can’t beat that.”