An Addiction and its Amazing Utility 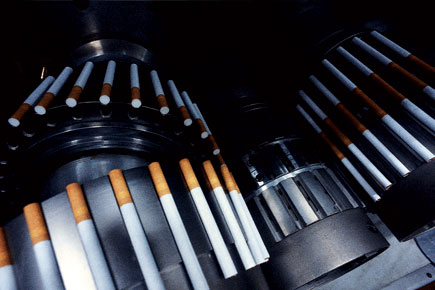 
“What does a finance minister turn to when he requires resources?” asked Finance Minister P Chidambaram, presenting India’s Union Budget on 28 February, before puffing out the predictable-as-ever answer in much the same breath: “Cigarettes.” It is an addiction that is not restricted to smokers; governments too find it irresistible as an easy target to squeeze for extra taxes. The Centre upped excise duty on cigarettes by 18 per cent this year. This, on top of a 22-per cent hike just last year.

India’s tobacco industry—which means ITC Ltd for the most part—is peeved. While heavy taxation is supposed to deter smoking, as the usual justification goes, it does not discourage tobacco consumption overall, argues the industry.

‘Consumers shift to cheaper substitutes like bidis, gutkha and other forms of smokeless tobacco, which are either lightly taxed or tax-evaded products of the predominantly unorganised sector,’ in the words of industry lobby Tobacco Institute of India. It argues that high taxes only raise prices and thus keep tax-paying cigarettes out of most of the country’s reach; and this means the State gets lower revenues than it potentially could if millions were to upgrade to cigarettes. These account for less than 15 per cent of India’s total tobacco consumption, after all, even as the category coughs up three-quarters of all tobacco taxes. 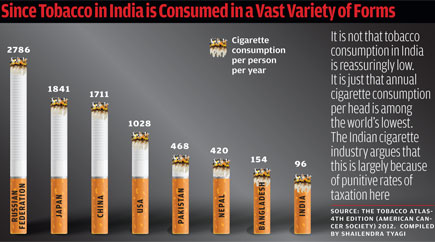 Are cigarettes overtaxed? According to Vivek Sharma, an expert of indirect taxes with Ernst & Young, central excise duties plus uneven state-level value added taxes “constitute up to 70 per cent of the cost of cigarettes in India”. That is a lot. But then, it doesn’t shock smokers enough to quit. That they do not is why cigarette makers not only pass every tax hike onto them without suffering a drop in demand, they even manage to raise their own margins as they raise prices. Firms like ITC have been reporting impressive profits on cigarettes.

From a corporate strategy perspective, that is justifiable too. Smoking has rapidly lost acceptability in the West, and while India has seen no class action suits against them, analysts say that tobacco majors need to reduce their dependence on the category. Just in case. Across the world, diversification is the way out, and here too, ITC Ltd has launched a series of personal care and food products. Such expansion is expensive and needs to be funded by cash-spewing businesses such as cigarettes. So even if the State agrees to lower taxes as a way to obtain big revenues from bidi switchovers, smoking upmarket brands like Classic and Gold Flake Kings is unlikely to ever get cheaper.