All Restive on the Retail Front

Walmart and Bharti have split. Is India’s retail FDI policy really a non-policy? 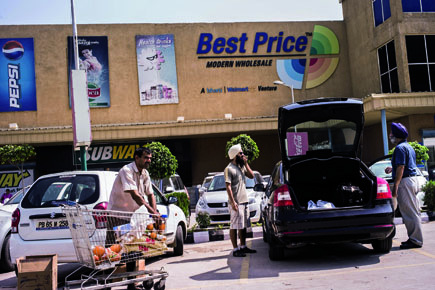 Walmart and Bharti have split. Is India’s retail FDI policy really a non-policy?


“We Wish Walmart the very best for the future,” said Rajan Bharti Mittal, managing director of Bharti Enterprises, after the mutual parting of ways between his company and the US mega-retailer, a six-year joint venture that was operating a series of wholesale stores in India. Their big plan was to run a chain of US-style supermarkets here, but the split looked inevitable because of the stringent riders imposed by India’s FDI policy in the multibrand retail sector. The big plan was simply not working out. Also, there had been some friction between the partners over a bribery scandal that had placed Walmart under the cloud of a US law, apart from local allegations in India of FDI rule violations by the JV.

Their wholesale business of ‘cash-and-carry’ outlets will now be run only by Walmart, while Bharti keeps its current chain of EasyDay outlets. However, Harminder Sahni of Wazir Advisors, a retail expert, foresees Bharti’s poor finances forcing it “to close its retail shops”. Walmart, he says, would most likely hold on to its wholesale business and wait for a policy relaxation that puts foreign retailers at par with domestic players on the 30 per cent local-sourcing condition for supermarkets, a policy irritant which insists that foreign players source at least one-third of their supplies from Small and Medium Enterprises in India. Walmart will probably stay on the sidelines waiting for full and free access to the Indian retail sector “either because it has an inkling of such a change in policy happening in a year’s time or does not see it happening in the immediate future” says Sahni. In either case, it seems to have calculated it does not need a local partner.

Since the break-up has been taken as a sign of Walmart’s frustration with Indian policy, pressure on the Government to ease norms may increase. The event has drawn attention, as analysts see it, to how the 30-per cent sourcing rule blunts Walmart’s competitive edge of low-cost global sourcing; how its being restricted to 1-million-plus population towns is too arbitrary; and how mandatory back-end investment interferes with its freedom of strategy. While much fanfare was made over India’s retail opening up, analysts say it is still not clear if it is truly open.

It is a $600 billion sector, mostly unorganised, with vast profit potential for large-scale players that use the clout of size to source goods cheaply. What India gains, says Sahni, is improved supply chains and greater choice at lower prices for Indian consumers.