A Quick Study of Withdrawal Symptoms 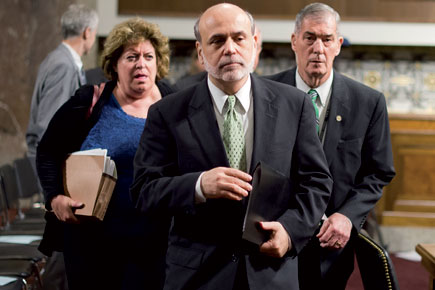 
If stock indices are anything to go by, sensitive investors registered a strong protest last week against what they saw as a nightmare about to unfold: the scaling back of the US Federal Reserve’s supercheap money policy. Called ‘quantitative easing’, this policy was put in place about four years ago as part of the Fed’s stimulus package to save America’s economy from being ravaged by its Great Recession. On 22-23 May, share prices fell across the globe, with the Nikkei 225 losing the most—about 7 per cent in a single day of trading.

The strange part seems to be this. If the Fed is thinking of withdrawing its monetary support (on indications that the US economy is past its scariest risks), this ought to be a cause for cheer. After all, the purpose of its steroidal policy was to see the economy revive and sustain itself on its own. Instead, investors are palpably nervous. This suggests an addiction to low-cost (even zero-cost) funding that may have turned pathological these past few years. So bad is it that a mere mention of its dilution brings on withdrawal symptoms.

“This is not strange,” says Uri Landesman, president, Platinum Partners, a New York-based investment management group. “The [cheap] liquidity of the Fed has provided artificial support for the market,” he says, “Therefore, the idea that this support might be disappearing spooks it.”

Does this mean that investors have been playing a game of chasing bulge after bulge in the liquidity pipe? Putting money into Fed-inflated assets (such as stocks), that is, in the hope that more money going into them will inflate them further? It seems so. Evidence from across the world indicates that instead of cranking up the real economy—the one that offers ordinary people jobs—much of the extra money has gone into speculation on risky assets in various parts of the world accessible to Wall Street. If businesses have done well, of late, it is mostly for reasons other than gaining customers or delivering better products and services. Landesman observes that companies are showing profits by “cutting costs and other mechanisms of financial engineering rather than by topline growth”. So employees are still being laid off, but dividends have been fine and shareholder revolts have been held in check by generous stock buyback programmes to hand out cash.

So, where does that leave the quest for that great job generator—economic growth? Do investors even care? To be fair, it is possible that their nervousness is explained less by their fear of the end of the bulge-chasing game and more by a reading of reality that is at variance with the US Federal Reserve’s. The economy, they might suspect, cannot sustain itself on its own. If this is their panic, then they should feel assured that the Fed is against a premature tightening of monetary policy. In any case, the US government is being forced to withdraw its fiscal stimulus. To contain its deficit, it must cut expenditure and raise taxes. The Fed’s chief Ben Bernanke acknowledges that this “would exert a substantial drag on the economy”; and that it could slow America’s pace of real GDP growth by about 1.5 per cent in 2013.

Some analysts fear that emerging economies such as India may be worst affected if the US Fed starts withdrawing its monetary stimulus. India’s vast current account deficit is funded by investment inflows from abroad, some of it pushed by the Fed’s easy-money policy. This is ‘yield-chasing’ money, since India offers better prospects on this measure than the US, and if such inflows slow down, India could be in trouble. Is that a big worry? “From a pure-yield perspective, India still has a fair if not exciting chance to attract foreign inflows from Japan and Europe,” says Ashvin Parekh of Ernst & Young, adding though that the country needs reforms to retain its allure beyond a point.

For all of last week’s drama, what the Fed will do is still unclear. Its QE3 effort, its third round of bond-buying, was designed to inject the US with $85 billion of money every month till economic conditions improved beyond doubt—that is, a stage with unemployment down to 6.5 per cent (from the current 7.5) and inflation above 2 per cent (1 per cent currently). This stage has not been reached. But an extended stimulus has its dangers. It tends to inflate asset bubbles and push investors to take risks that could blow up in the Fed’s face later. It has happened before.

Moreover, as Bernanke has said, “Only a healthy economy can deliver substantial high real rates of return to savers and investors.”