A Land Mine Waiting to Explode

This could be independent India’s biggest scam, worth an alleged Rs 300,000 crore. From the small to the big, famous to the infamous, all are guilty of illegal mining in Orissa. 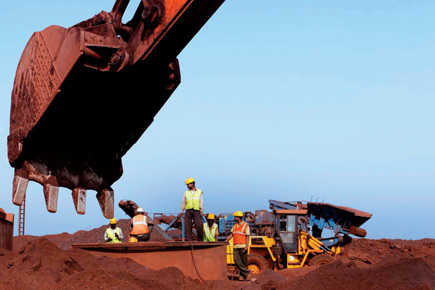 Illegal mining in Orissa could be independent India’s biggest scam, worth an alleged Rs 300,000 crore.


On every floor of the three-storey building that houses the Steel and Mines Department inside Orissa’s Secretariat in Bhubaneswar, visitors are greeted by well-appointed mini shrines of Lord Jagannath, the ‘owner and protector’ of the land. Twice a day, priests sanctioned by the government offer elaborate pujas, and the strong smell of incense somewhat manages to mask the mustiness typical of rundown sarkari offices. And it seems it’s all for good reason. For a state that, despite being so generously endowed with minerals, remains the poorest and least developed in the country, almost surviving on flakes of divine grace, propitiating the gods is sound strategy.

Also, the Naveen Patnaik government in Orissa is battling allegations of a muti-crore illegal mining scam, described by some as the biggest and worst in Indian history. Patnaik’s squeaky-clean image has been taking a beating since June, when the lid blew off massive cases of organised illegal mining and rampant flouting of mining and forest laws by private and state firms—commercial entities that included some of the biggest industrial houses of India, and even the state-owned Orissa Mining Corporation.

The range of economic estimates of the scam is broad. It varies wildly, depending on who you speak to. While Patnaik, who was voted back for a third term in office, steadfastly maintains that there’s not even a whiff of scam but only some “irregularities” blown out of proportion, Jual Oram, state president of the BJP, Patnaik’s erstwhile coalition partner, offers a mind-boggling estimate of Rs 3 lakh crore. The Congress and BJP, now united in the opposition benches, claim these are open-and-shut cases, and have been demanding a probe by the Central Bureau of Investigation (CBI).

An under-fire state government even abruptly adjourned the Assembly’s winter session sine die, provoking the opposition to spend a night inside the House and conduct a mock session sans the speaker or members of the treasury benches. Forced to act, the Orissa government hastily ordered a vigilance enquiry that led to the cancellation of 128 mining and 400-odd trading licences.

Trouble began when SN Dasmohapatra, who owns a small manganese mine in Keonjhar district, alerted authorities about frenetic night-time quarrying and transportation activity in the region of the neighbouring Ram Bahadur Thakur Mines (RBT). Now it turns out that RBT, a firm that was liquidated almost a decade ago, was somehow given a renewed mining license as recently as last year, and the ‘defunct’ company was blissfully not only mining manganese within its boundaries, but also in adjoining forest areas that were not supposed to be part of the undertaking.

But Srijoy Dasmohapatra, an ad executive-turned-mining entrepreneur and son of SN Dasmohapatra, claims that the state government, in order to protect the interests of RBT’s owners, has blatantly turned whistleblowers into the accused. “The government modified the cases to show that, in fact, we were the ones illegally operating RBT Mines,” he says.

It has been a matter of high drama, with not just opposition ranks but even Orissa’s Right to Information (RTI) activists latching on to the case. Several ‘fact finding’ missions led by opposition parties and RTI queries have since revealed that there indeed was a colossal scam, and the state government was more than eager to turn a blind eye to it.

“If a proper enquiry is done in Orissa, Madhu Koda would seem a petty thief,” says the BJP’s Oram. But why is his party, which had partnered the ruling Biju Janata Dal (BJD) for two successive terms, raking up the muck now? “Patnaik and the cabal of bureaucrats used our BJP ministers like rubber stamps. We had no voice in the cabinet,” responds Oram.

Broadly, there are two ways in which Orissa’s earth is plundered. One is good old mafia mining, where groups without any licences or approvals clear forest land and dig for ore, and transport it using light commercial vehicles. Then there are genuine mine owners who undertake massive deviations from their approved mining plan and encroach into forest areas, often extracting several times more than what is officially stipulated by the government. And even some of the largest and most trusted companies in the country aren’t immune. In fact, according to a report by the Indian Bureau of Mines, the central governing body for the sector, between 2001-02 and 2005-06, Essel Mining dug out 20.6 million tonnes of iron ore in excess of its permitted limit of just under 2.6 million tonnes from two mines alone. At current market prices, the value of excess ore exceeds Rs 4,000 crore.

The state vigilance department crackdown notwithstanding, illegal operations seem to be going on unabated. At Sirajuddin Mines, a company whose license for one of its mines in Joda was cancelled recently, excavation machinery is still around, and fresh truck and earthmover marks are visible signs of nightly mining activity. Even the workers’ shacks are intact. Everything seems like business as usual. A couple of lungi-clad men in a Bolero, who identify themselves as “staff”, look perturbed with nosy journalists lurking around and clicking pictures.

At another mine in Jajang, operated by SR Rungta Ltd, one of the largest ore exporters in the country, and also under the vigilance scanner, the action seems unhindered. A loaded truck leaves the gates every five minutes. A joint verification of the mine by the vigilance department and mining officers in October 2009 found that nearly 20 million tonnes of ore was extracted not only in 22.6 hectares of forest-broken area, but also deep inside the forests over the last ten years. Add to this the encroachments into mines owned by OMC, a state enterprise. The inquiry revealed that Rungta had manipulated the production and dispatch of iron ore to the tune of 10 million tonnes in 2007-08 alone. In a place where trees, leaves, roads, trucks, clothes and even truth is covered in several layers of haemmatite dust, it is hard to distinguish the legal from the illegal.

Sitting in a room lined with fish and crustacean specimens dunked in formaldehyde-filled Horlicks bottles, Biswajit Mohanty, a chartered accountant-cum-environmental activist, estimates that mining companies could have robbed the exchequer of Rs 14,000 crore just on account of illegal over-extraction. Thanks to the last decade’s boom in commodity cycles and massive demand for steel domestically and from China, the mining sector has been one of the fastest growing and most profitable in the country. Essel Mining, a company with large operations in Orissa, reported post-tax profits of Rs 900 crore on revenues of Rs 2,400 crore—a profit margin of nearly 38 per cent. Just to put that in perspective, the infotech giant Infosys, one of the country’s best performing companies, has reported margins of a lowly 28 per cent in comparison.

It’s not just opposition parties or activists with political motives cying foul. Even a Cag report in 2008 found the mining system in the state leaking like a sieve. Upon examination of the finances of the mining sector, the report concluded that in 2007-08 alone, the state lost some Rs 225 crore due to under-recovery from companies.

Ashok Dalawai, the state’s influential steel and mines secretary, however, contends that the government has nothing to hide when it comes to the mining scam. “Conspiracy, or deliberate favours to benefit some individuals, are key ingredients of any scam. And in this case, there are none. The government has nothing to hide and we are trying to maintain maximum transparency,” the bureaucrat says.

Then why hastily suspend mining licences and order a vigilance probe?

Dalawai says that since the boom days of 2003, some mine owners may have done things the wrong way. “We wanted to give them some shock treatment. But sometimes the policy response could not keep pace with economic activity. Law itself is an evolving creature. The longitudes and latitudes keep changing. For instance, the Forest Conservation Act came into being in 1980. It has taken the courts 20 years to actually define what is a forest area and what is a ‘deemed’ forest area,” says the soft-spoken secretary. He cites action against even OMC (of which he happens to be chairman) as evidence of the state’s honourable intentions, as he claims.

Another top official in the state’s forest conservation department alludes to the same problem. It is a fact that almost all mines in the state coexist with forests and reserve areas cheek-by-jowl. Given the multiplicity of laws, their interpretations, and lax forest patrolling, encroachments are never easy to detect. “We are still operating with maps drawn by British cartographers. How do you expect us to catch someone who has encroached a few acres of forest land deep in the hinterland of the state? If law was enforced in both letter and spirit, I can guarantee that none of the 600-odd mines in the state could be able to operate,” he expounds.

With a commodity boom of this magnitude, you would expect Orissa to have prospered immensely. It has 33 per cent of India’s iron ore and half of its bauxite reserves. But the state’s development indices show little evidence of any boom. The recent Suresh Tendulkar report on poverty ranks Orissa rockbottom, with almost 60 per cent of its 40 million population living in conditions of abject poverty. It’s a shame.

Mohanty says Orissa suffers from the mining curse. “Till recently, the government’s royalty for each tonne of iron ore produced in the state was a little under Rs 30, and even the number of people employed in the mining sector has been coming down consistently over the years. The biggest problem is that there is very little by way of value addition that’s happening in the state. With not many downstream industries that convert raw material into final product, there’s very little gain in having vast mineral reserves,” he says.

It is the lure of vast deposits and unbelievable profit margins that is making large companies stay put in Orissa. Even though the allied infrastructure that Orissa offers for the biggest industrial activity in the state is among the poorest. The roads connecting the mining areas in Keonjhar to the state capital Bhubaneswar, or even the important Paradip port—on which more than 40,000 trucks ply every day—are so bad that those even in the interiors of Uttar Pradesh would appear like autobahns in comparison. Truckers say it is often not unusual for them to take two hours to cover a 10-km stretch.

Rabi Das, a veteran local journalist, who has filed a public interest litigation in the Supreme Court against the state over the mining scam, says what Orissa is facing today is a deadly mix of corruption, incompetence and apathy.

“The production figures the mine owners file to the Indian Bureau of Mines and those released by the state government do not tally,” says Das, “There are several mines that are operating merrily despite their licences having expired. The Cag report is just the tip of the iceberg. We have every reason to believe that this is the biggest scam in independent India.”

Das says that even suspicions that the illegally mined iron ore and manganese loads wind their way across the border to such places as Nepal and China, and are then used to make small weapons for Maoists, cannot be ruled out.

If that is indeed true, even Lord Jagannath may be unable to help.