A Touch of Irony 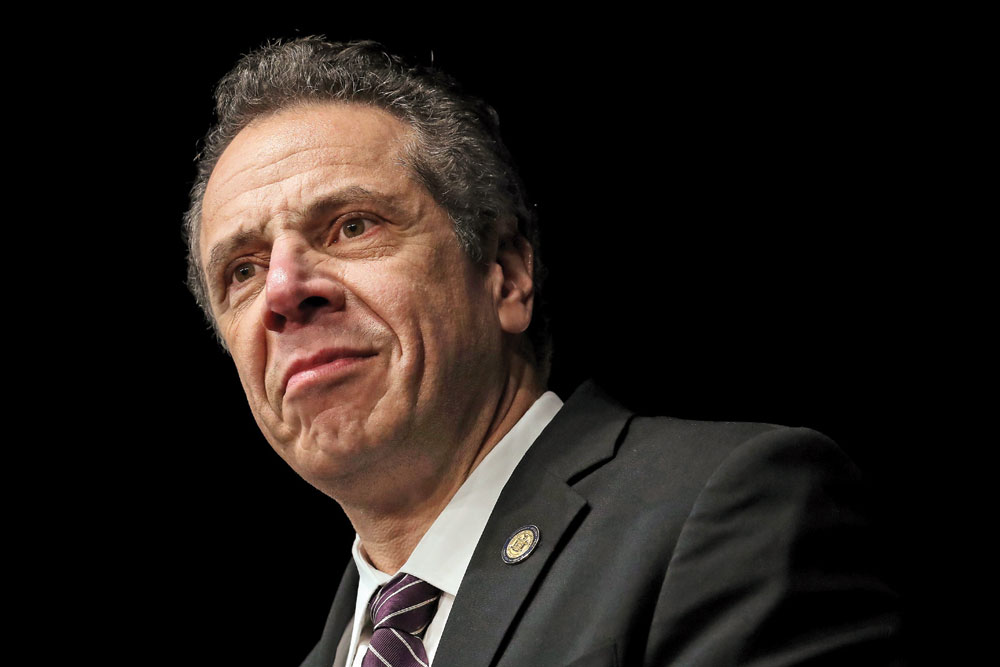 
MARIO CUOMO, THE 52nd governor of the state of New York, was the target of an assassination plot by the Sicilian mafia in 1992 during a trip to Italy. The objective was to embarrass the Italian federal government into calling off its mafia hunt by the Carabinieri and Sicilian police. The attempt was aborted when Cuomo showed up with an impenetrable security detail. A longtime liberal and one-time lawyer to Donald Trump’s father Fred, Mario Cuomo did not like the word ‘mafia’ and had asked the media to stop using it. For denying the existence of the mafia, Cuomo was taken to task by Joseph Pistone, aka Donnie Brasco, the legendary FBI agent who had infiltrated the Bonanno family.

Three decades later, Mario Cuomo’s much-celebrated son, Andrew, the 56th governor of New York and in office for a decade, has had a hard fall. Three women, two of them his former aides, have accused him of sexual harassment; a New York assemblyman has accused him of threatening to destroy his career, an accusation seemingly legitimised by Bill de Blasio, the mayor of New York city; and, in what has led to a full-blown federal investigation, the Cuomo administration appears to have underreported Covid-19 deaths in New York’s care homes by several thousand. Calls for the governor’s resignation have mounted not only from state and Washington Republicans but also from many Democrats.

Andrew Cuomo today embodies a contradiction of perhaps much bigger magnitude than the ambivalence and equivocations of his father, a Catholic in elected office who had to distinguish his public position on abortion from his private one with a nuance that the Archbishop of New York did not ultimately buy. Less than a year ago, Cuomo was a household name on either side of the Great American Divide, and increasingly admired abroad, as the ‘anti-Trump’ thrown up by the pandemic. Where the president was in prolonged denial, Governor Cuomo told New Yorkers, and others, the ‘unvarnished truth’ about how bad things were in his frequent media briefings. Admired as a man on the side of science and common sense, Democrats had seriously considered making him the presidential nominee or, at least, Joe Biden’s running mate. Cuomo was certainly more popular than Biden and his televised briefings had many more viewers than anything the eventual 46th president made an appearance for.

US House Speaker Nancy Pelosi called the sexual harassment allegations “credible”. A Democrat New York City councilman tweeted: ‘The pattern of sexual harassment and predatory behavior by Governor Cuomo is unacceptable, and I believe the women coming forward,’ and went on to ask Cuomo to resign. Bullied Assemblyman Ron Kim, also a Democrat, said on March 2nd: “…we’re pushing for impeachment, and there are more people every day who ask him to step down and resign”. New York Attorney General, Letitia James, another Democrat, quickly acted on the letter of authorisation from Cuomo’s office to start an independent probe. Democrats in the state Senate are also likely to take away his emergency powers. But after an earlier apology that was more a non-apology—the usual recourse of men of power harassing women, close aides or relative strangers, and then saying their words and intent were misunderstood?—on March 3rd, Cuomo issued a second apology expressing remorse but refused to resign.

The women—Lindsey Boylan, Charlotte Bennett and Anna Ruch—have spoken out and supported each other; they have also caused a rumble in the Democratic Party. Cuomo’s approval ratings have dropped but he still remains popular owing largely to his pandemic counsel. However, conspicuous has been the absence, or relative invisibility, of activist outrage. Where is MeToo? Is it because the accused is now a purported liberal, whose anti-Trump halo from last year hasn’t fully dissipated?

Cuomo has another big problem. New York, one of the worst pandemic-affected states, recovered remarkably on his watch. But that momentum has been lost and New York looks at an uncertain future. The FBI is investigating, among other things, how 15,000 care home deaths came to be reported as 8,500. A top Cuomo aide saying privately that they underreported the deaths fearing that the data “was going to be used against us” is a glimpse of the hypocrisy at the heart of heroism.