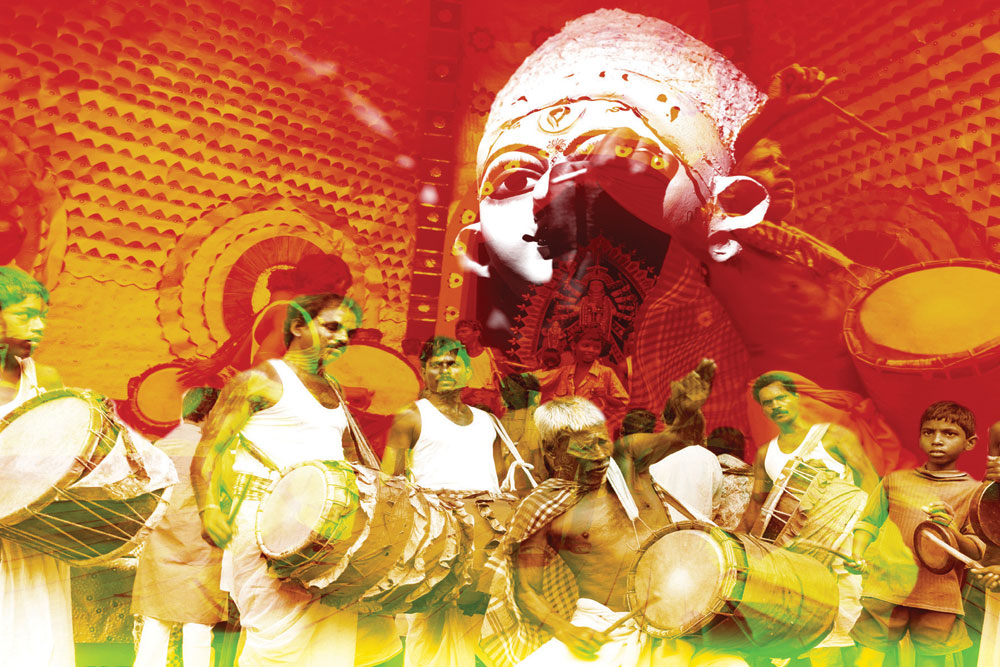 
KOLKATA’S DURGA PUJA has been celebrated in popular culture for what it is, a joyous celebration that cuts across religion, ethnicity, caste and class. A period of 10 days which ends with the ritualistic slaying of the demon Mahishasur by Goddess Durga, it is also now officially recognised as part of UNESCO’s list of intangible cultural heritage (ICH), after a gruelling three-year process of paperwork by the Ministry of Culture and Sangeet Natak Akademi (SNA). In the interim, two ministers have come and gone; the secretary who proposed it has retired, and the joint secretary who filed the final paperwork has moved on.

But finally, the iconic Puja has become the 14th Indian institution to find a place in the list that began in 2008 and celebrates intellectual wealth such as folklore, customs, beliefs, traditions, knowledge and language—among India’s previous inscriptions are yoga, the Parsi New Year Navroz, and Kumbh Mela. The recognition is not a moment too soon, says Ratish Nanda, a conservationist who has worked extensively on Humayun’s Tomb and other structures around the Nizamuddin area of Delhi. “The transformation of Kolkata with the mushrooming of incredible Durga Puja pandals of diverse design, and the associated rituals and fervour is an event unmatched anywhere in the world,” he says. It is an opportunity and a responsibility, he says. “It’s greater than the Edinburgh Festival, with its endless tourism, promotion of craft food, and music. But it is also a responsibility to ensure the pandals don’t become like architecture—made of glass and plastic.”

The Ministry of Culture through the SNA asked cultural historian Tapati Guha-Thakurta in 2018-2019 to prepare the dossier for submission to UNESCO for nomination in its ICH list. Guha-Thakurta was selected as the field expert because of her long years of research on the contemporary Durga Pujas of the city, which led to her book, In the Name of the Goddess: The Durga Pujas of Contemporary Kolkata (2015). This UNESCO nomination dossier work was carried out under her guidance by two research assistants, Sandipan Mitra and Devi Chakrabarti, who are currently PhD students at Presidency University and Cambridge University, respectively.

They looked at the multiple connotations of Durga Puja, from its being the most extravagant public art carnival in the country to its status as the most important marker of time in Kolkata’s calendar. As an art festival, it is a thriving ground for collaborative artists and designers who tirelessly commit to the large-scale installations and pavilions that amalgamate modern artistry, historical and folk influences, and sophisticated thematic concepts, cutting across genres of craft. The nature of mass participation in the touring and viewing of the Puja is exceptional to the city and the festival; all divides collapse in this crowd of spectators. It has also emerged as a major exercise and successful template in community and governmental management of a grand public event.

An extraordinary public art fête, says Sandipan Mitra, it transforms the expanse of the city into a larger-than-life exhibition of creative outflows. “With every passing year, these installations become more spectacular, the simulations more novel, and the concepts more ambitious. The Puja organisers have recreated iconic architectural buildings, historical monuments and tribal villages from across the world. These themes are a reflection of the global imagination at work within the city’s Durga Pujas which stem from the organisers’ sensitivity towards representing cultural diversity,” he adds.

The themes often also indicate the changing inclusive nature of the Pujas. This year, for instance, the Ahiritola Jubak Brinda represented the lives of the sex workers, Samaj Sebi Sangha recreated the world of the blind people (they even printed their concept note in Braille), Bosepukur Talbagan highlighted the plight of street children, and Dumdum Park Tarun Sangha focused on the trials of child labour.

In the process of creating the pandals, the theme-makers and Puja designers draw heavily from the traditional, and often, endangered art and crafts traditions of the country and fuse them with newer innovations in art. Says Mitra: “The Durga Puja also acts as a site of cultural and artistic pedagogy for the masses. It helps to disseminate knowledge regarding the art, architecture and craft traditions of India and the world.”

It also signifies homecoming or a seasonal return to one’s roots. There is a constant production of cultural memory and nostalgia for the festival’s past implied in the rampant promotion of ‘heritage Pujas’, and a commitment to the diligent performance of all rituals associated with the worship of Durga. This is also apparent in the efforts made by non-resident Bengalis who endeavour to recreate the Pujas in their places of residence to keep the tradition alive. There was some debate though whether the inscription should be Durga Puja in general or Durga Puja of Kolkata, in particular. Guha-Thakurta and her team felt that though Durga Puja is the most important festival of West Bengal and is observed in many other states, in Bangladesh, and in major cities of the world by the Bengali diaspora, over the years, Kolkata has emerged as its geographical and cultural heart. It is where the longest history of Durga Puja can be traced, from its grand celebrations within the mansions of the traditional families to its growing life as a community event.


For some years now, corporate sponsors have been harping on the importance of a global ‘branding’ of Kolkata’s Durga Pujas as a unique cultural event. This aspiration will benefit from the UNESCO inscription

Kolkata alone has around 5,000 Durga Pujas, involving an elaborate organisational infrastructure of the communities and the government. While Durga Puja has become the city’s biggest cultural event, the city’s identity has grown increasingly synonymous with this festival. Though the roles of men and women are clearly delineated, women are also now taking on important roles as Puja organisers, fundraisers, publicity managers, people’s representatives, and heads of governmental departments in charge of administering the festival. Social organisations have also begun a new initiative of involving a larger group of unmarried women, widows, sex workers and transgenders in different rituals of worship.

Durga Puja has always lent itself to the notion of an “utsav” (festival) where the internally-bound community of worship could extend into a more fluid, cross-class, cross-religious group that would partake of the feasting, revelries, entertainment and philanthropy that grew to be an integral part of both the Banedi Barir and Barowari Pujas of the late eighteenth and nineteenth centuries. As heritage conservationist Amita Baig says, the inscription’s contemporary perspective endorses a continuous living tradition as it should be—not frozen in the past, but very much here and now.

The state government has emphasised this with its slogan for the festival being “dharma jar jar, utsav sobar”, meaning individuals may subscribe to their respective faiths, but the festival belongs to all. So, what does this status mean for the Durga Puja of Kolkata? Mitra hopes it will make the local clubs, Puja committees and elected people’s representatives aware of Durga Puja’s tremendous artistic potential of gaining world recognition. It could become Kolkata’s annual international public art event, on par with the Kochi-Muziris Biennale, and could help transform the economic and cultural profile of the city on the global map. For some years now, corporate sponsors have been harping on the importance of a global ‘branding’ of Kolkata’s Durga Pujas as a unique cultural event that can “bring the world to the city.” This aspiration will benefit from the UNESCO inscription.

As Nirupama Kotru, former joint secretary, Ministry of Culture, who filed the final dossier with UNESCO says, it is not merely a gigantic artistic achievement, but it is also a great source of employment and sustenance for different hereditary communities– priests, drummers, image-makers, artisans, craftspersons–who would have otherwise declined into oblivion.