Vijay: Dancing To His Own Tune

A Tamil superstar says an emphatic no to politics 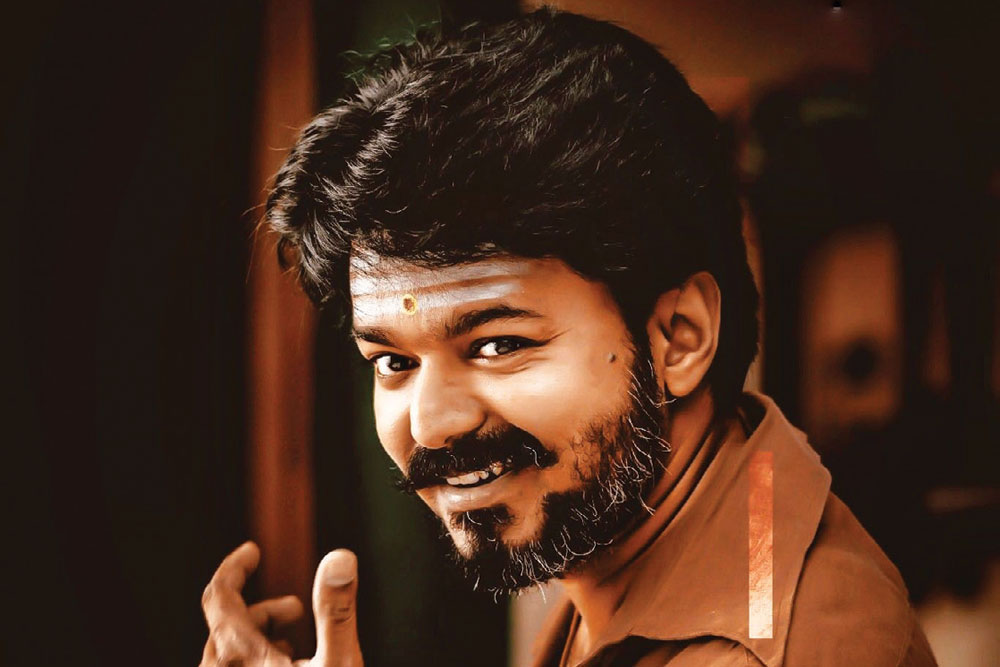 “I AM WAITING.” A full nine years after Joseph Vijay delivered the punch line as Jagadish Dhanapal in the 2012 Diwali entertainer Thup­pakki, the wait is over, with the Tamil actor once and for all ending specula­tion about pursuing a political career. Filing a lawsuit against 11 people including his parents, director-producer SA Chandrasekhar aka SAC and former singer Shoba Chandrasekhar, in a city court in Chennai, the actor re­leased a statement declaring that he would not join politics. Chandrasekhar had registered a political party, the All India Thalapathy Vijay Makkal Iyak­kam, with the Election Commission of India, appointing himself the general secretary, his wife as the treasurer and a relative as the president. He had also made statements late last year hinting at Vijay’s political entry, which the actor had refuted, urging his fans not to believe rumours. Now, ahead of local body polls in nine districts in Tamil Nadu, Vijay, whose net worth is currently estimated to be over `400 crore, has once again distanced himself from his father’s political ambitions and warned his family not to misuse his name.

After superstar Rajinikanth reneged on his promise to enter politics, citing poor health, Vijay’s announcement has liberated Tamil politics— aside from Kamal Haasan’s modest foray—from the thraldom of cinematic hero worship. As the Dravidian train hurtles unstoppably on, “Thalapathy” (Commander) Vijay, at 47 years of age, has chosen not to make a bid for the driver’s seat, almost as if he approves of the other Thalapathy at the helm— Tamil Nadu Chief Minister MK Stalin. It is true that the anti-establishment tone of several of his films had hinted at an alternative career—if Thalaivaa (2013) ran afoul of the then Chief Minister J Jayalalithaa who famously denied him an appointment, his criticism of GST and state-run healthcare in Mersal (2017) pitted him against BJP, which labelled him anti-Hindu. In 2018, speaking at the audio launch of his film Sarkar, Vijay seemed open to the idea of “reforming” the state if given a chance to serve as chief minister. Sarkar, incidentally, attacked the state’s freebie culture, incensing both DMK and AIADMK. The income tax department raid in February last year at Vijay’s residence and premises based on allegations that he had accepted a large sum in cash towards his salary for Bigil (2019) further confirmed his standing as persona non grata in political circles.

When Vijay cycled to the polling booth to cast his vote in the Assembly elections earlier this year, it was enough to ignite speculation that he was making a point about fuel prices. Once perceived to be close to Rahul Gandhi, the actor has never confirmed his father’s pronouncements about his political future—in one interview, Chandrasekhar had claimed his son would enter politics when he turned 40, in 2014, the year of the General Election. Instead, Vijay has been content to serve up hit after hit and to hold on to his title of a bankable romantic action hero.

A one-time child actor, Vijay had a series of false starts playing the lead despite being backed by his father, an influential director-turned-producer who had helped shape the careers of Rajinikanth and Vijayakanth, among other stars. After tasting box-office success with Poove Unakkaga (1996), Vijay starred in a string of tepid films through the ’90s, but redeemed his reputation in the new millennium with performances that became milestones in his career. Ghilli (2004), where he played a state-level kabaddi player, outperformed the original Telugu film starring Mahesh Babu from which it was adapted. It was Thuppakki that catapulted Vijay into the big league, however, paving the way for superhits over the years— Theri (2016), Mersal and Bigil among them. In his latest, Master (2021), the superstar broke formula to deliver an understated performance, sharing the screen with another reigning star and his namesake, Vijay Sethupathi, and showing off his dance moves in the viral hit Vaathi Coming. Vijay will be seen next in the action film Beast, directed by Nelson Dilipkumar. Yet another project, a Telugu film tentatively titled “Thalapathy 66”, is in the works.