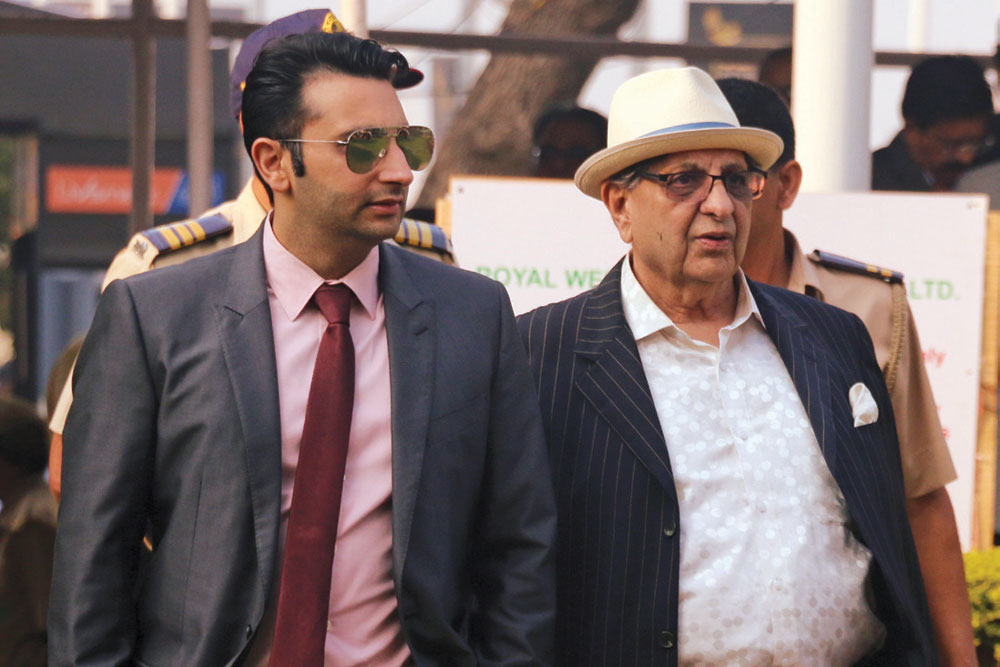 
NO VIRUS CAN read a calendar year. And yet, here we stand at the start of a new year, our hearts brimming with hope. That’s because the vaccines are here. And in India’s case—and really much of the devel•oping world’s—one particular vaccine: Covishield, the AstraZeneca-Oxford vaccine being manufactured by Serum Institute of India (SII). (The indigenously developed Covaxin by Bharat Biotech has been granted emergency use approval in India but is still undergoing final phase trials.)

And amidst this moment, stand two individuals, arguably the most important figures in the global vaccine scene who don’t work in a lab. The Poonawallas. The father-son duo of Cyrus and Adar Poonawalla who run SII in Pune.

Although Covishield (along with Covaxin) was granted approval a few days ago—and it seems so far that the Government is yet to reach a price and supply deal with the company—the first phase of the vaccination drive is expected to begin sometime in mid-January. And SII will likely not just be India’s insurance against the virus. It will be for much of the world’s middle- and low-income nations.

Both the big pharma vaccines of Moderna and Pfizer are far too expensive and require large investments in cold chain supplies. Rich countries have mostly ensured that only their citizens will have access to these at this time. So, for most of the world right now, it appears it will come down to the AstraZeneca-Oxford vaccine, and in turn, the large manufacturing capacities of the Poonawallas’ SII that will churn them out, to ensure that the world—and not just rich countries—is able to put the pandemic behind it.

While the pandemic has thrust the Poonawallas into the limelight, they have been important players in the vaccine market for decades. The two oversee a vaccine empire—the world’s largest vaccine manufacturing plant by number of doses—that annually churns out around 1.5 billion doses against diseases such a meningitis, measles and tetanus. Last year, Forbes ranked Cyrus India’s sixth richest individual, his net worth estimated at $11.5 billion.

The Poonawallas were originally famous horse breeders. It is said that in the 1960s, a young Cyrus got into vaccine manufacturing after a chance meeting with a veterinary doctor at Mumbai’s Haffkine Institute, where the retired horses from their stud farm were sent so vaccines could be made from horse serum. The company grew rapidly because they managed to keep vaccine prices very low. There was a meteoric rise for the company after the mid-1980s, Cyrus had told a media outlet, once it got accredited for supplying vaccines to the UN agencies.

Before the pandemic broke out, his son Adar had been as famous for his business nous as for his lifestyle, his large collection of cars, European artworks, his passion for horses, and being frequently spotted, along with his wife, with Bollywood personalities. In the business domain, Adar has expanded the group aggressively, acquiring other vaccine companies, investing in new technology, and scaling up volumes. He once told Mint: ‘‘I wouldn’t take risks in things I don’t understand. Maybe I will take more risks in the vaccine space than, say, real estate.’’

Covid-19 has thrust the Poonawallas, and especially Adar, into the forefront. And Adar has proven more than up to the task, from signing deals with promising vaccine researchers and international agencies, investing his own personal wealth in ramping up production even before test results were out, to negotiating prices and hashing deals behind the scenes. According to reports, India could be buying about 100 million doses at a price of Rs 200 per dose, which is below the $4 to $5 price tag given to the UK government. At some point, discussions about making the vaccines available privately at a higher cost will no doubt arise. The company also has international commitments to supply a certain number of doses. And according to reports, the company wants access to higher-margin private markets where the vaccine’s price will be marked up by about five times.

For all the risks taken earlier, there will probably be more than a windfall for the Poonawallas at the end.