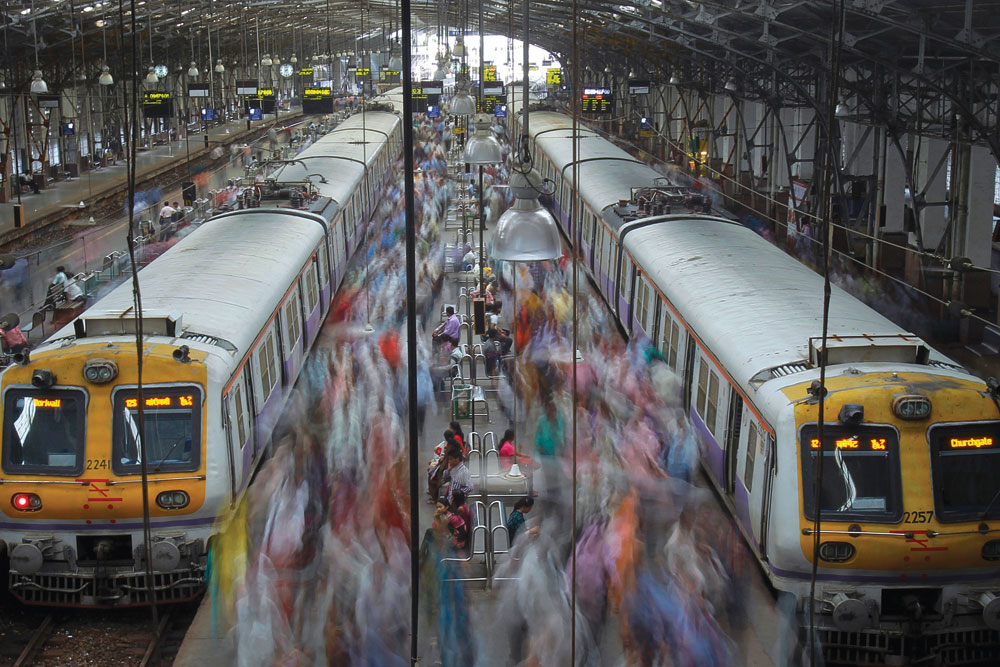 
ON A RECENT weekday, what appeared to be part of a domestic squabble spilled on to Mumbai’s suburban train network. A group of Government Railway Police (GRP) pulled a woman aside at the Andheri station to examine her forged identity card. Although Laxmi Batra’s identity card claimed she worked as a nurse, the GRP knew that she worked at one of the film production offices in the locality, and that she had forged the card to board the train.

Batra had been ratted out by her son-in-law. Later that evening, amused GRP officials revealed to reporters how Batra had forged the identity card of her son-in-law’s mother who worked as a nurse, and how the enraged son-in-law called the GRP control room for four straight days, not just tipping them off with the timing of the trains she boarded but also supplying them with her photograph.

The episode appears funny but it is one becoming increasingly common. As Mumbai unlocks itself while its local trains, its soi-disant lifeline, remain restricted to individuals in essential services, more people are being caught travelling using fraudulent means. They are forging identity cards and slipping through, sometimes by climbing over fences and crossing the tracks to reach the platform. “We have begun to notice many individuals travelling on forged IDs. So we are increasing vigil. Putting up even more people for random checks,” says Anil Kumar Jain, the spokesperson of Central Railway that manages the city’s two railway networks of the Central and Harbour lines.

While these individuals boarding the trains do so illegally, many have begun to ask what other choice they have. How can a city be opened for business, yet its most essential form of public transport remain barred to most individuals? If the local trains are the city’s lifeline carrying blood throughout the body, how long can the city survive with blocked arteries and veins?

There is currently a lot of demand for the trains to be reopened. There have been protests by passengers outside railway stations. A PIL asking for lawyers and their staff to be allowed is now being heard at the Bombay High Court. And a few weeks ago, some leaders from Raj Thackeray’s Maharashtra Navnirman Sena, forever on the lookout for an issue, forcefully boarded the trains in protest. There have been some hints by ministers, including Shiv Sena leader Aaditya Thackeray, that the reopening could happen soon. According to reports, the state is currently considering allowing 30 per cent of workers employed in the private sector to board them.

But there are concerns. “It’s not so easy to restart the trains for everybody. How do we monitor a crowd this large? How do we ensure everyone is masked, or overcrowding doesn’t happen inside a train coach? If the virus were to spread, all the efforts we have so far taken in the city [to stop the outbreak] can go to waste with a single false step,” says an official from Western Railway, which runs the Western line in the city’s rail network.

The city’s trains are arguably the most crowded suburban rail network in the world. According to IndiaSpend, an estimated 80 lakh passengers travel on the city’s 2,800 daily services, in comparative terms, larger than the entire population of Hyderabad put together. Although a nine-coach train is meant to carry 1,700 passengers, each train carries nearly three times that capacity. Between 14 to 16 people stand together per square metre inside a moving train. And every year, over 2,500 people die taking these trains, simply falling off because of overcrowding or while crossing the tracks (last year, the figure was 2,691 deaths), not to mention many more who get injured.

How does one reopen this essential service while also avoiding a Covid-19 calamity?

So far, the city’s authorities have responded by increasing the number of bus services. But because of the manner in which the city has grown, where most people live very far from their workplaces, this option has become a nightmare.

Many people living in the outer limits currently spend over eight hours in a day travelling to and fro.

A senior official in an insurance firm who used to drive to her office in Kurla began to take the trains because her commute took over two-and-a-half hours in just one direction. “The trains were okay earlier. But right now even with limited passengers, the trains have become crowded,” the official says. “It’s almost back to the old days.”


According to Paresh Rawal, a city-based urban transport specialist, it is unfair to expect people to take buses instead of trains. “You cannot have buses trying to replicate the trains. A particular service, be it trains, buses or autorickshaws, does not work in competition with but as a complement to the others,” he says. “Right now, what has happened,” he adds, “is that the government has declared the city is open for business, but it has abdicated responsibility for providing any means for the people to go from their house to their work. That’s just really unethical.”

Various experts have offered different solutions. They have suggested offices allow for staggered work timings, where the concept of peak-hour travelling disappears and train services have a uniform number throughout the day. Rawal calculates that a 12-coach train on the Western line can be made to carry just 950 commuters, with a restriction on seats and standing. He suggests ticketing be moved entirely online, where people don’t just book their tickets but also the train which they intend to catch. Suggesting that making the entire ticketing process online is possible, Madhav Pai, the executive director at the World Resources Institute India Ross Center for Sustainable Cities, says, “It’s just bullshit if you say not everyone will be able to book tickets online.”

Rawal has another suggestion for making trains serve a ‘home’ and ‘service’ sector, where they are made to travel between a few such designated sectors, and coaches are allotted in such a manner (for instance, those alighting at Virar and Vasai stations board different designated coaches) to avoid the chaos and crowding that invariably occur on Mumbai’s local trains. “If you know the city’s trains, these ideas can sound unworldly, I know,” says Rawal. “But this [the pandemic] is a very unusual situation and we are all going to have to think out of the box to make travel safe and possible again.”

A LOT OF THE current discussion on how trains can be resumed has mostly focused on the train itself. But the train is really just one aspect of the challenge. Mumbai’s rail network isn’t only a means of travelling, it is also a place for enterprise and economic activities. There are hawkers and beggars on the trains, those that carry goods to godowns and marketplaces through the city, vendors on platforms, more hawkers and establishments and autorickshaws outside the exits and entrances of stations waiting to service this huge volume of commuters. There are narrow platforms and crumbling foot overbridges where crowding, equal to that on the trains, often occurs. Three years ago, 23 people died in a stampede as they tried to get off one such foot overbridge.

“Not just the trains, but everything from stations and bridges will ideally have to be redesigned,” says Pai.

A few years ago, Pai began to analyse crowding patterns across Mumbai’s station areas like platforms, staircases, entrances and exits, and foot overbridges. ‘WRI India is investigating ways to adopt a ‘level’ of service approach in combination with crowd management science to develop a framework to measure comfort and safety on public transit in new ways. The idea is to consider the rail system from the user’s perspective and to consider qualitative measures, rather than focusing solely on quantitative measures of success,’ he has written recently. 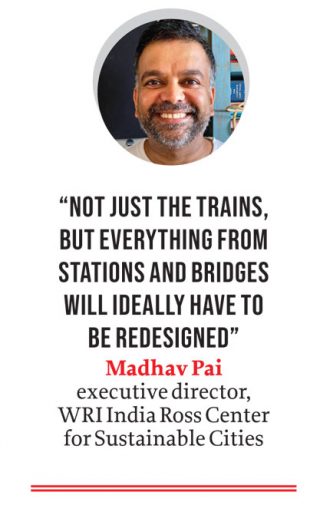 They began to collect and analyse photographs across the suburban network, scaling the images based on measurements collected onsite and basic assumptions. Although they had been working on the project for some time, it picked up pace rapidly after the 2017 stampede.

Their analysis reveals just how severe it is to commute on the city’s locals. Pointing to the stampede that occurred on the foot overbridge in 2017 between Parel and Prabhadevi stations, he argues that it is not just the structure which is a problem, even the space to access them is underdesigned. One narrow access road was found to be serving around 38,600 people per hour on just one evening. At Kurla station, one of the busiest in the network, he points out that crowds alight from trains onto a wide platform (7.9 metres) only to be shoved onto a 3.5 metre-wide staircase, a density he estimates to range between 10 to 12 people per
square metre. 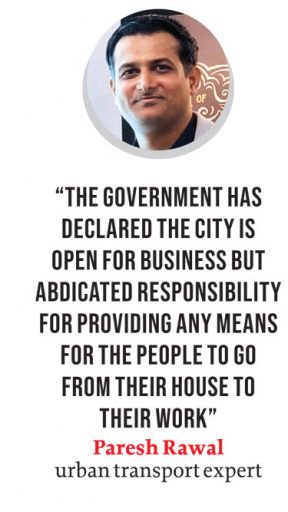 “It is possible to work around these. We will have to redesign and reimagine these spaces, but it will have to be done to make travelling safe,” says Pai. He suggests, for instance, using spaces like the ticketing area as a holding area for people before they can enter the stations and move to the platforms.

Pai—who is currently in dialogue with the authorities to see how crowd control measures can be introduced on the network—says there has been considerable advancement in artificial intelligence technology and the way data is captured and analysed on public transit systems to enable railway authorities to monitor and control crowds.

“The railway authorities are very keen. But they have their own limitations…Plus all this requires bureaucratic consultations between the railways, the municipal council and the state government, and that comes with its own challenges,” he says. “But right now, the public transport system is a mess. And if we are to live with the virus, something needs to be done.”