Three Cheers for the Quad 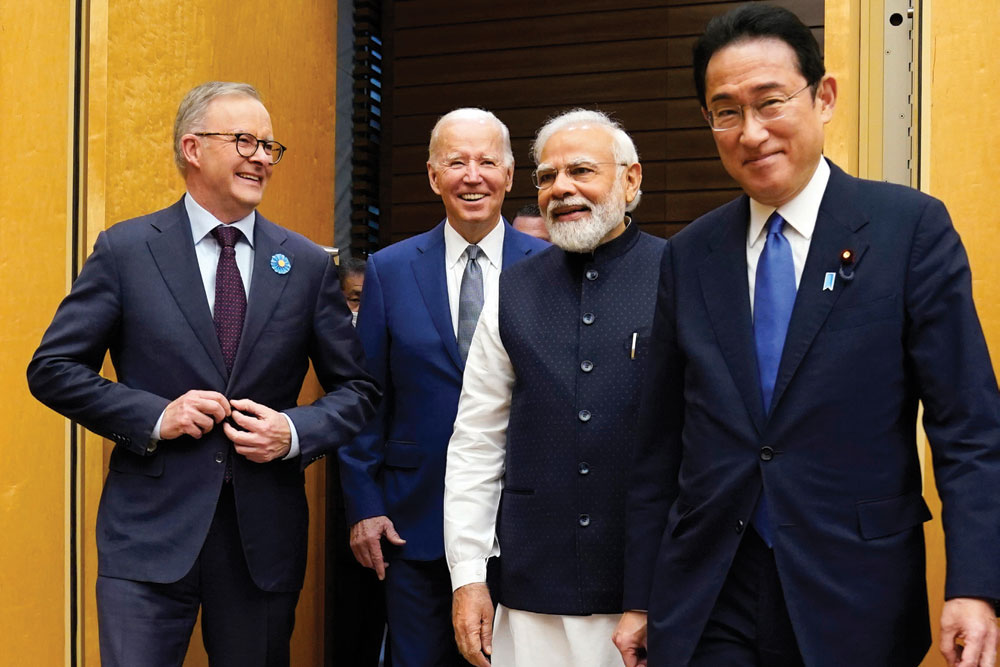 
IT IS NOT HARD to find Quad sceptics. Most critics say the grouping lacks teeth. Others claim that it is designed to encircle China. But if the just-concluded Tokyo summit of its leaders is anything to go by, the group seems to be gaining heft and depth with every passing year. The Quad is signalling that it is up to meeting the challenge posed by China.

As with all Quad summits, there was a flurry of announcements, joint statements and bilateral meetings in Tokyo. But the announcement of the Indo-Pacific Economic Framework (IPEF), the Indo-Pacific Partnership for Maritime Domain Awareness (IPMDA) and the US-India Initiative on Critical and Emerging Technologies (iCET) signals a steady march of the group in a fraught region. Critics will, as always, say this is nothing but a soup of acronyms. The reality is that the group has not only persevered and withstood many challenges, but it is also now much more focused on meeting challenges.

Take the IPEF, for example. On first reading, the “Fact Sheet” released by the US government looks like a wishlist of items that countries in the region want, and not a concrete proposal. And when compared with the kind of financial commitments made by China in the Belt and Road Initiative (BRI), the IPEF appears to be an emaciated initiative. This, however, is an unfair comparison. What is worth noting is the context in which the economic framework has been initiated. In a world of diminishing economic opportunities and strong protectionist sentiment, it is not easy to chart multilateral economic arrangements.

During the Cold War, Southeast Asia was a region that received large dollops of US and Japanese investment. Most of the countries that received generous aid and investments were in danger of communist insurgencies. At that time, China was a closed economy and nowhere near the economic behemoth that it is today. To replicate the same arrangement in vastly different circumstances is much more difficult. The US is no longer the “buyer of last resort” for export-led miracles to take place in this age, and neither is Japan the powerhouse that it was at that time. Yet, led by the Quad countries, 13 countries have signed up for the IPEF. Only the countries that are closely aligned with China have stayed away. There are, to be sure, sticky issues like cross-border data flows and data localisation but given the magnitude of the challenge posed by China, these are unlikely to be deal killers. The IPEF will take time to realise its potential but the important point is that a beginning has been made. It is wise for Quad not to be seen solely as a military alliance and impart an economic dimension to it. Unlike China’s debt-trapping of countries, the IPEF has a different mission and because of its emphasis on free and fair trading, it is likely to involve time-consuming discussions.

Perhaps the most underplayed agreement in Tokyo is the IPMDA. Maritime awareness is essential if illegal fishing, smuggling and other illicit activities are to be checked. Locating vessels engaged in such activities in the vast expanse of the Indian and Pacific oceans is like looking for needles in a haystack. But with satellite tracking, it is possible to share this information with different countries. As such, this information is in the nature of a public good. But it is an expensive public good as the kind of satellite imaging and tracking in real-time is very costly. With IPMDA and the various “information fusion centres”, it is possible to process this information and share it. India has its own Indian Ocean Region Information Fusion Centre in Gurugram.

The (iCET), to “expand partnership in critical and emerging technologies”, is another interesting area of cooperation between India and the US. This will be led by the national security councils of the two countries.

These and other areas of agreement among the Quad members and other countries are unlikely to pacify critics who seek more “action”. These are misplaced criticisms. The challenge posed by China is not just a military or an economic one. The manner in which it has blended its economic and strategic interests requires a very different approach, one that is not just military or economic. The two are unlikely to work in isolation. This is a much bigger challenge than anything that democracies and free countries have seen before.


Perhaps there are countries that will realise the toxic nature of China’s largesse (Sri Lanka?), and perhaps there are others that never will (Pakistan?). But this does not mean the world should not try and present an alternative. The IPEF is not an altruistic arrangement—nor should it be one—but neither will it be a China-style takeover of despondent countries

In the 1940s, it was a much simpler task to band together a group of countries in Europe to meet the challenge posed by the USSR. But there is a big difference between the Soviet Union in the 1950s and 1960s and China in the 21st century. To begin with, the Soviet Union never had the kind of economic heft that China has at any point in its existence. Even when it gave “aid” to developing countries of that time, the Soviet Union never meshed its strategic and economic interests in the manner in which China does now.

Today, there are a large number of small countries whose economic prospects are dim. Lack of physical and financial investments has led to situations where any amount of money distributed by China is welcome. In return, China seeks, and gets, ‘security arrangements’ that are thinly disguised attempts to get military bases, even if it does not use that expression openly. Given the weak economic conditions of these countries, the Chinese offers are ‘offers that cannot be refused.’ Its recent and opaque security agreement with the Solomon Islands, a country with a GDP of $1.50 billion in 2021, is an example. It is unlikely that China sees great trade or economic prospects on that edge of the Pacific Ocean. But it makes great sense to have military basing rights in that part of the world if it is to compete with the US one day.

This sort of ‘deal-making’ is not easy to counter for any single country, including the US. But at the same time, it is clear that a purely military-edged arrangement to counter China is least likely to work. Why should these resource-starved countries refuse China’s offers of money? If the answer is that they are bartering away their sovereignty, this is likely to be scoffed at: what use is ‘sovereignty’ in the face of near-permanent economic hardship? The challenge for democracies is ideological, military and economic, all rolled into one.

It is natural to be pessimistic about slowly unfolding arrangements like the IPEF. Perhaps there are countries that will realise the toxic nature of China’s largesse (Sri Lanka?), and perhaps there are others that never will (Pakistan?). But this does not mean the world should not try and present an alternative. The IPEF is not an altruistic arrangement—nor should it be one–but neither will it be a China-style takeover of despondent countries.

For critics, Tokyo is likely to be viewed as another occasional jamboree. But the reality is different. On one side is a ruthless country with an unbroken tradition of authoritarian rule spanning thousands of years. On the other side are people who value their freedom, but are no match singly. The need of the hour is collective action. The first steps to that end have been taken.