The Return of the Quad

Why Australia rejoining Malabar is significant 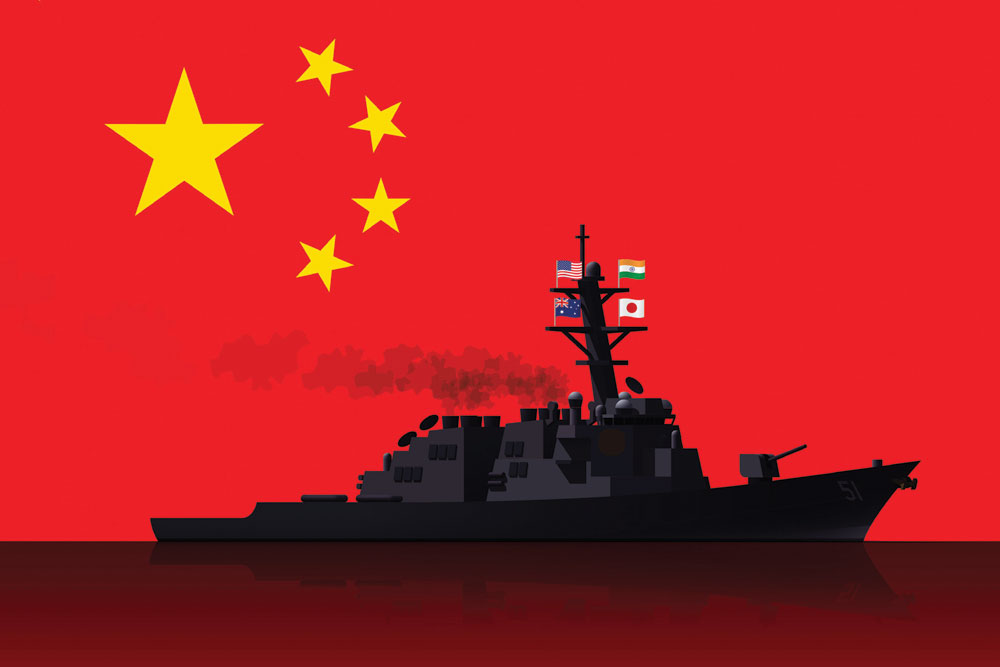 
ON MONDAY, OCTOBER 19TH, in a not altogether unanticipated decision, the Indian defence establishment abandoned its self-restraint, or rather self-imposed restraint, to invite Australia to the 2020 Malabar exercises with itself, the US and Japan. The absence of surprise didn’t entail a lack of optimism, or even euphoria in some quarters. In the mix of the tangible and the symbolic, the latter usually has the first say and Australia’s ‘return’ to the Quadrilateral Security Dialogue (Quad) is as symbolic as it reconfigures the Quad’s raison d’être. Malabar, of course, is not held under the auspices of the Quad but the forum can finally live up to its name. And it was now or never.

The Quad had disintegrated in 2008 when Kevin Rudd’s Labor administration had pulled Australia out and enthusiasm had waned in both Japan—with Shinzo Abe, whose brainchild it had been, leaving office in September 2007—and India—where the UPA Government, with its overcautious defence minister, bent over backwards to stay out of China’s way. In the years that followed, two, not unrelated, geopolitical developments had progressed simultaneously. China’s continued economic rise with the attendant, now overtly prioritised, military modernisation and the growing defence and strategic closeness between New Delhi and Washington.

The fear of an angry China had afflicted not merely South Block. China had protested vehemently when the double Malabar of 2007 had expanded to include Australia and Singapore. In the end, the Chinese had won both ways. Rory Medcalf, strategic expert and head of National Security College at The Australian National University, recently wrote in Australian Foreign Affairs: ‘The main criticism of the Quad back then was that it would needlessly provoke China down a perilous path of military modernisation and destabilising behaviour. Yet Beijing chose such a road anyway. The perils the Quad’s critics thought it would invoke ended up arising in its absence (emphasis added). The next decade brought such geopolitical instability that the four governments became convinced their disbanded dialogue had been an idea ahead of its time.’

In the autumn of 2020 going on winter, China has risen from the beating it initially took over the pandemic to revel in military aggression and aggressive posturing brazen by even the People’s Republic’s (PRC) standards since the time of the Chairman. After the summer of bloodshed in the Himalayas with the Indian military, President Xi Jinping has given a call for war-readiness to the People’s Liberation Army (PLA) and reportedly the PRC is seriously planning an invasion of Taiwan, or at least that’s the message it’s intent on conveying. In a retaliatory diplomatic measure following up on the dragged-out but still unfinished trade war, the US has appointed a special coordinator for Tibetan issues. The irony of the situation is that, having evidently got several things wrong at home and abroad, the Trump administration got two things obviously right—China and the Quad—among certain other things it most likely got right in foreign policy and geopolitics. (It’s more than just a joke that Covid-19, originating in Wuhan and then damaging Donald Trump, the first US President to put real roadblocks on Beijing’s long and quick march to global supremacy, has been a windfall for the Party.)


Australia rejoins Malabar and Delhi, by rights, will practise its minilateralism within and without the Quad. But sometime in the near future, it may want to note that alliances are not commitments till death do nations part.

It was the Trump administration that in 2017 had helped begin the resurrection of the Quad. This had perfectly dovetailed with New Delhi, with a new Government in office, by then having realised that staying out of Beijing’s way only emboldened the PRC and made it take you for granted. Rather, greater proximity to Washington would squeeze Beijing at one end and make it more amenable to dialogue at the other. It worked to an extent where China went into a mode of alternating between dismissing the US-India partnership and raising its protest pitch. All the time, the border face-offs went on as did China’s continued efforts to block India from export control regimes like the Nuclear Suppliers Group. By the time an angry India, in the fall of 2020, invited Australia to Malabar, the die had been cast. The catalyst was the second ministerial meet of the Quad in Tokyo earlier this month—a face-to-face, physical meeting despite the pandemic—where mutual interest and intent converged with all eyes on the clock.

Medcalf tells Open: “It was worth the wait. Australia’s inclusion in the 2020 Malabar naval exercise is a confirmation of the logic of practical Indo-Pacific security cooperation centred on the Quad. For many years now it has been clear that these four countries offer an exceptional convergence of strategic interests, competent capabilities, mutual respect for a rules-based order and willingness to work together. China and its affronts to regional order provided the final glue, making manifest the pre-existing alignment of interest among the four.” As neatly as that sums up the resurrection of the Quad, what has changed in Delhi can’t be reduced to the post-Galwan heat. The message, despite attempts to mute it, is quite clear: India’s counter-aggression vis-à-vis China now officially spans land and sea, from Ladakh to the Indo-Pacific, notwithstanding Delhi’s communiqué that the Quad should not be conflated with the Indo-Pacific. The truth, or what one hopes is the truth, should be that the immediate end here is cutting off the Straits of Malacca from the PLA Navy whenever the need arises.

Each of the four members of the Quad is in Beijing’s crosshairs. But the fact is that the Quad is not the only strategic forum of its kind in the Indo-Pacific. While the idea was to expand it to include the UK and France—an idea that may yet see the light of day given Japan’s permanent membership in Malabar since 2015 and now Australia’s return—there are already at least two trilaterals that have surfaced in the region: a formalised broad-issue forum involving India, Australia and Indonesia and a less formalised maritime exercise and exploration trilateral among India, Australia and France. As Medcalf points out, there’s also the ‘less famous quadrilateral’ of Australia, New Zealand, the US and France in the South Pacific. The Quad, in fact, may now scale things up and broaden its horizons, taking a leaf out of the South Pacific diplomatic quadrilateral’s book. Medcalf says: “After this, the Quad won’t look back, and we are likely to see collaboration broaden across other domains like supply-chain resilience, cyber security and coordination of diplomatic efforts in multilateral organisations.”

The question, for the others though, would inevitably return to India. Soon after the announcement on October 19th, ABC journalist Siobhan Heanue tweeted: ‘Australia joining Ex Malabar is significant – but it is India that will make or break the Quad.’ Delhi has been more driven and seemingly determined than ever in reviving the Quad but it apparently remains the weak link. Japan and Australia are both alliance partners of the US. India is not likely to be one in the foreseeable future, especially given the persistence of apathy towards the idea of big-time alliances in South Block. Delhi, by rights, will practise its minilateralism within and without the Quad but sometime in the near future it may want to sit up and note that alliances are not commitments till death do nations part. They are also functional tools to realise mutual goals with likeminded parties. China has forged and broken alliances with one and all, often based on single, extremely short-term objectives. From where Delhi looks at the world, it will not find ‘big’ countries, with a stake in its maritime neighbourhood, more likeminded than its three partners in the Quad.