The Key to the Universe 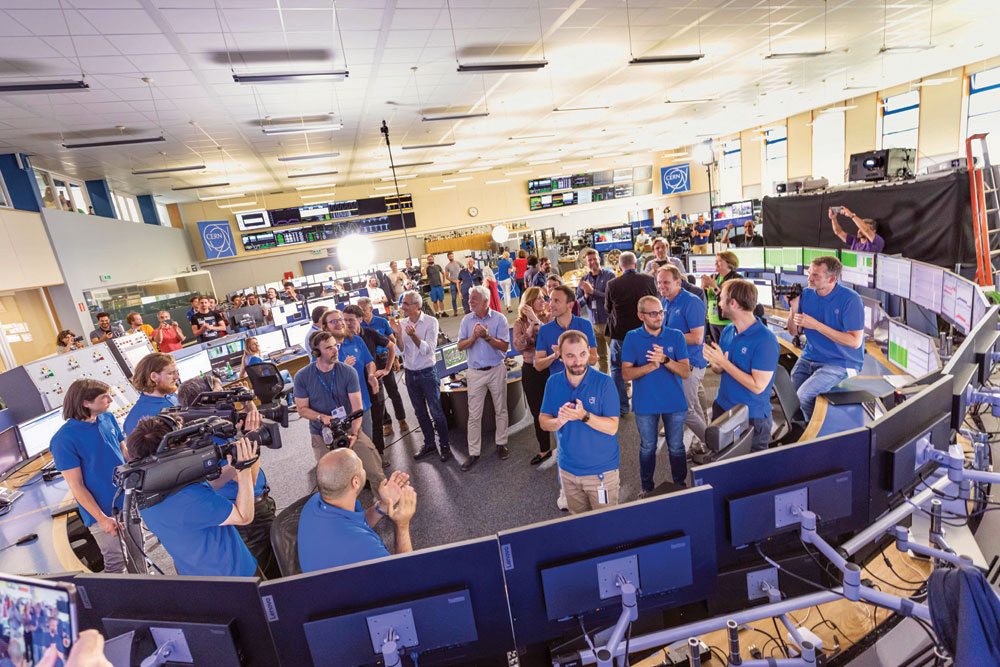 Celebrations at CERN to mark the start of the LHC Run 3 (Photos courtesy: CERN)


HERE’S AN AXIOM: The bigger the science, the bigger the conspiracy theories about it. Or so it used to be. Ever since Dan Brown made CERN, or the Organisation européenne pour la recherche nucléaire (derived from the original Conseil européen pour la recherche nucléaire) aka the European Organization for Nuclear Research, an everyday acronym, there’s been a morbid public fascination with what it does (or doesn’t). We are not talking about canisters of antimatter blowing up here but the 27-kilometre-long Large Hadron Collider (LHC) under the Franco-Swiss border that’s the world’s premium particle (that is, proton) smasher. A monster of a machine that took 10 years to build from 1998 to 2008, the LHC, of course, was nowhere near completion in 2000 when Brown’s Angels and Demons was published and had just com­menced operations when the film was released in 2009. But the association in the public mind had stuck.

Call it superficially interested and sensation-seeking but one might have expected more matter (no pun intended) to the viral conspiracy theories that had been doing the rounds on social me­dia than merely a zombie apocalypse. Could CERN create a black hole on July 5? What if the LHC opened up a portal to another dimension that let in demons, or worse, aliens? Above all: Was the world going to end on July 5? Well, the world didn’t end on July 5, but someone had put out a fake social media post that naturally traversed much of the internet in which CERN apparently apolo­gised for doing precisely that: ending the world on July 5.

On July 5, the LHC at CERN began its third run (Run 3) after three years of shutdown for maintenance and upgrade (it came alive in April this year), almost exactly 10 years to the day CERN had announced the discovery of the Higgs boson, the so-called “God particle”, whose existence had been theorised almost 50 years earlier by physicists Peter Higgs and François Englert, who went on to finally win the Nobel Prize in 2013. The Higgs boson is fundamental to the invisible force or energy field of the universe called the Higgs Field in which particles had be­gun ‘colliding’ or interacting with each other in the wake of the big bang. The Standard Model of particle physics had explained how particles interact in the universe but not how they came about to acquire mass. The Higgs boson helped physicists understand what gave particles their mass. The idea was that many particles were without mass after the big bang but thanks to their interactions with other particles in the Higgs Field, they became heavy, that is, they gained mass. The important thing to remember is that the existence of the Higgs boson had been predicted all those years ago via the Standard Model. However, the necessary evidence had eluded science till the LHC had come along and had its breakthrough in 2012.

In other words, the Higgs Field answers crucial questions about the universe and everything in it: the why and how of existence. But for the atom, we wouldn’t be here. That atom is the handiwork of electrons which not only have mass but cluster around a nucleus to birth an atom. Why this happens was ex­plained by the Higgs boson, just at it shed light on neutron decay. An article co-authored by the Guardian’s science editor and published on June 29, 2012, days before CERN’s announcement of the discovery of the Higgs boson, had precisely summed up what the particle would mean for physics: “It would vindicate the so-called Standard Model of physics which envisages that the universe is made from 12 basic building blocks called funda­mental particles and governed by four fundamental forces…”


The world did not end on July 5, nor did we hear of a portal opening to another dimension. But the CERN LHC’s Run 3, with the broad objectives of researching dark matter and observing how matter behaves under extreme conditions, is supposed to herald a ‘new physics’, taking us beyond the Standard Model

The Run 3 experiments that began on July 5 have the broad objectives of researching dark matter and observing how mat­ter behaves, what happens to it, under extreme conditions of temperature and density. This is supposed to herald a ‘new physics’, moving beyond the Standard Model. On the eve of Run 3, CERN announced: “The LHC will run around the clock for close to four years at a record energy of 13.6 trillion electronvolts (TeV), providing greater precision and discovery potential than ever before.”

Soon after the beginning of Run 3, scientists at CERN announced they had discovered three new “exotic” particles. The subatomic particles in question are a new “pentaquark” and the first pair of “tetraquarks”. Hadrons, that is, protons and neu­trons, are formed when quarks combine, usually in twos and threes. Quarks, in CERN’s terse words, “are elementary particles and come in six flavours: up, down, charm, strange, top and bot­tom.” But sometimes, the combinations involve four or even five quarks, thus generating the tetraquarks and pentaquarks.

In this round, the LHC’s proton beams have been narrowed to below 10 microns, thus increasing the collision rate within the collider to 1.6 billion per second, a significant jump from the LHC’s initial capability of 600 million collisions per second. The LHC’s accelerator is kept cooler than interstellar space at minus 271.3 degrees Celsius, and not merely because the tiny area of collision can rise to temperatures above that of the sun at its core. Hailing the work, LHCb physics coordinator Niels Tuning said in a statement: “We’re witnessing a period of discovery simi­lar to the 1950s, when a ‘particle zoo’ of hadrons started being discovered and ultimately led to the quark model of convention­al hadrons in the 1960s. We’re creating ‘particle zoo 2.0’.”

Behind the great and the good, however, the backdrop was rather dark. What if there was nothing more to be found? For a decade after the Higgs boson, the LHC had come up with little else. An article in Science, published on June 13, had argued: “Unless Europe’s Large Hadron Collider coughs up a surprise, the field of particle physics may wheeze to its end”. The writer, Adrian Cho, summed up the problem thus: “The standard model describes everything scientists have seen at particle colliders so far. Yet it cannot be the ultimate theory of nature. It leaves out the force of gravity, and it doesn’t include mysteri­ous, invisible dark matter, which appears to outweigh ordinary matter in the universe six to one… The LHC was supposed to break that impasse… A decade ago many physicists envisioned quickly spotting marvels including new force-carrying particles or even mini-black holes… Finding the Higgs would take longer, physicists predicted.” Instead, “the Higgs appeared in a relatively speedy 3 years—in part because it is somewhat less massive than many physicists expected, about 133 times as heavy as a proton, which made it easier to produce. And 10 years after that monumental discovery, no other new particle has emerged.”

What’s emerged since July 5 may not measure up to the discovery of the “God particle” (physicist Leon Lederman, who coined the name, had reportedly wanted to call it the “goddamn particle” but was overruled by his editor), but the LHC is alive and kicking and throwing up stuff. And all of this at a time when there are serious concerns being raised by scientists about the waste of resources. Last month, a physicist had argued in Big Think: “A significantly more powerful LHC++ will cost tens of billions of dollars. It’s entirely possible that the price could swell to $100 billion. Spending that much money on a machine to take shots in the dark is a mistake. When you don’t have much to go on, and limited resources, it’s better to aim at problems that you know are out there. Those things will lead you to new discoveries.”

In the here and now, however, here’s CERN’s own clarification for those living in fear of black holes: “The LHC will not generate black holes in the cosmological sense. However, some theories suggest that the formation of tiny ‘quantum’ black holes may be possible. The observation of such an event would be thrilling in terms of our understanding of the Universe; and would be perfectly safe.”