The Ironies of Covid Mutations

With every successive wave, there will be a new variant which will dominate 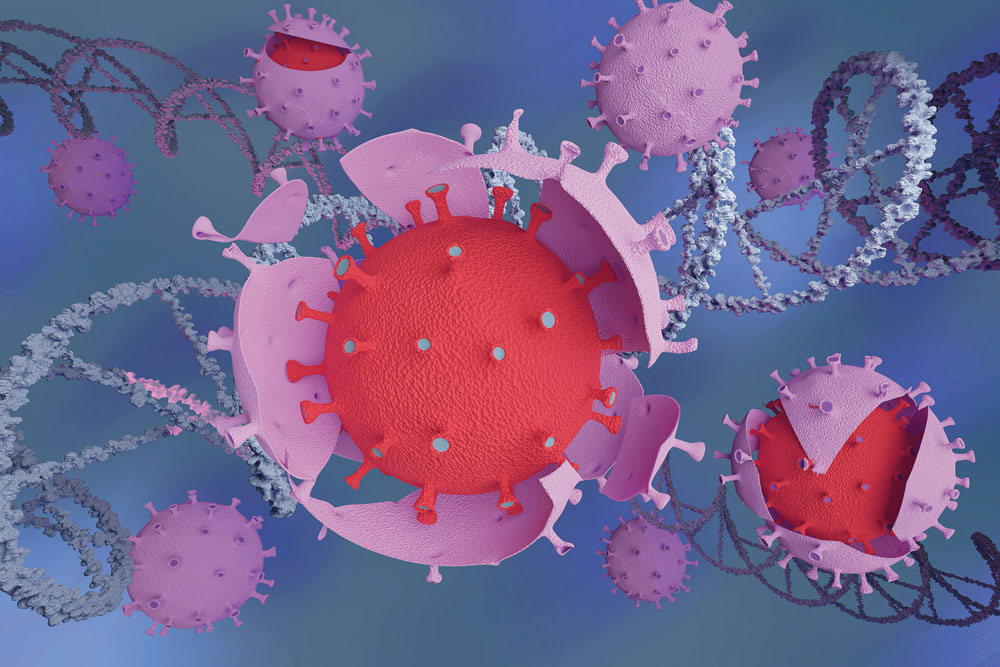 
THE PROBLEM WITH getting on top of mutations in a virus during a pandemic is that there are too many of them. They are happening even as you read this in numbers no one has any clue about. They go in all directions. The mutation could make the virus less lethal, more lethal, less transmissible, more transmissible or, as is often the case, do nothing at all. But, note, this is all in reference to us. What is happening to the virus is of consequence only in its relationship with the human body. There is no politburo of Covid viruses sitting in a war-room deciding how it will change shape in order to attain a grand strategic objective of world conquest. The virus only knows how to replicate. It wants nothing else. It does not even want. It is in that sense an enlightened being—merely existing and replicating when it can, and if it can’t find a host, lying more or less dead, perfectly at ease.

Many new viruses, whether of natural origin or born of a laboratory, come into being, but this one won the lottery when the code of its spike protein could stick with great success to a particular type of human cell. It was a design arrived at through the trial and error of evolution (or experiment). The success or failure of a mutation is also the same. The virus keeps on infecting whoever it can. At the same time, its replications are far from perfect. Some of the letters in the RNA, the bare minimum code that makes for its structure, jumble up. Or some get lost. A new variant with a minor tweak is introduced. It waits in its region to jump patiently just like other newly mutated viruses, and all those that arrived earlier.

Now, imagine that this brotherly group is in a small village in Kerala called Parali near the town of Palakkad. From the initial 20 to 30-odd cases of the Delta Plus variant discovered in India, three were from Kerala and, of that, one was from Parali. At one point, in the peak of Kerala’s second wave, the test positivity rate was almost 40 per cent in Parali. There are around 18,000 people living there. These are all potential hosts for all the virus strains existing there. A large percentage of the population is vaccinated. In Kerala, the drive has been orderly despite the paucity of supply. At Parali’s health centre or panchayat hall, you can daily see a long line of people waiting for the dose. So, imagine all virus strains in Parali are now hopping from person to person through contact. The earlier ones, for which the vaccine was designed, get targeted by antibodies. The journey of that strain gets broken soon. A newer strain, like Delta Plus, might escape the fence better. And therefore, in theory, the number of people infected with it will begin to increase. Gradually at first, and then as with anything exponential, there are giant leaps. This was as it happened last September when a variant began to dominate in Kent, UK, and then spread across the rest of the country and leaped continents becoming the big one in the US too. This was how Delta, the one before Delta Plus, exploded in Mumbai in the beginning of March, and within a few weeks, had begun to rampage in Delhi, too, and from then on, to the rest of north India.

There was an interesting phenomenon about Delta in Mumbai. In the first wave, almost the entire brunt of it was borne by the slumdwellers. And in the second wave, the infected numbers among them were negligible as compared to residents of housing societies. Iqbal Chahal, the municipal commissioner of Mumbai, would say in one interview to The Print: “In second wave, 95 per cent cases are from non-slum areas, the rich and super rich are getting Covid.” What it means is that the Delta variant was probably not much better at dodging immunity. Otherwise, those who got it in the first wave wouldn’t have been protected. It is a mutation that is said to be more transmissible given the speed at which it ripped through the country. But that doesn’t mean it is stronger. What you saw in terms of the toll around it was just a function of the larger numbers who were infected this time. If a variant kills 1 per cent, then one person will die for every 100 infected. If a variant only kills 0.1 per cent, then one person will die for every 1,000 infected. But if the number of infected is 100,000 for the second variant, then in absolute numbers, there will be 100 deaths even if the virus has become less dangerous. Mutations come with a fine print when it comes to its impact.

With every successive wave, there will be a new variant which will dominate. But it is in the interest of the virus to become less dangerous. The less it kills, the greater is its ability to spread, fulfilling the objective nature has given it—replicating till kingdom come. Ebola is one of the most lethal viruses with death almost a given for those who contract it. But that is also the reason why it will never become a pandemic like Covid. People will just die before they are able to spread it around a lot. The mutations that succeed the most are the ones that seek to live in cordiality with human beings. Like, say, the common cold. Or, even the worst pandemic humanity ever saw, the Spanish Flu. After a few years, the virus just mutated into a mild seasonal flu that human beings didn’t bother to avoid.

The Delta variant has now pushed aside the Kent variant in the UK where numbers are creeping up but, on the other hand, there has not been any marked rise in hospitalisation. However, since the impact of any mutation becomes clear after substantial transmission in the population, the stock response to any new variant is to react with panic. But how long can such a default alarmist response continue? Singapore, for instance, is planning to treat Covid like any other disease by doing away with obsessively tracking daily case numbers, tracing contacts, enforcing lockdowns and all the other weapons countries think are imperative whenever the virus mutates. Singapore thinks it is impractical. A CNN report said: “The proposal is a radical departure from the so-called ‘zero transmission’ model adopted by several countries and territories—including rival Asian business hub Hong Kong—which have so far proved successful at avoiding large outbreaks. But this ‘zero transmission’ model, which requires stringent, often punishing quarantine measures, will be almost impossible to maintain as new variants spread, and long term is simply not sustainable, the (Singapore’s) task force members claim. Instead, they say living with Covid can be done.” Meanwhile, in Parali, which saw one Delta Plus case, the district administration enforced a one-week strict lockdown. The case was one that had been reported a month back. The patient had long become normal and, if the variant was indeed as transmissible as feared, then locking down one village meant nothing. And what could possibly change in one week? As with a lot of response to Covid, what has become most important is to be seen reacting whether it makes sense or not.