The T20 format is a great leveller, helping cricket’s minnows beat one top team after another 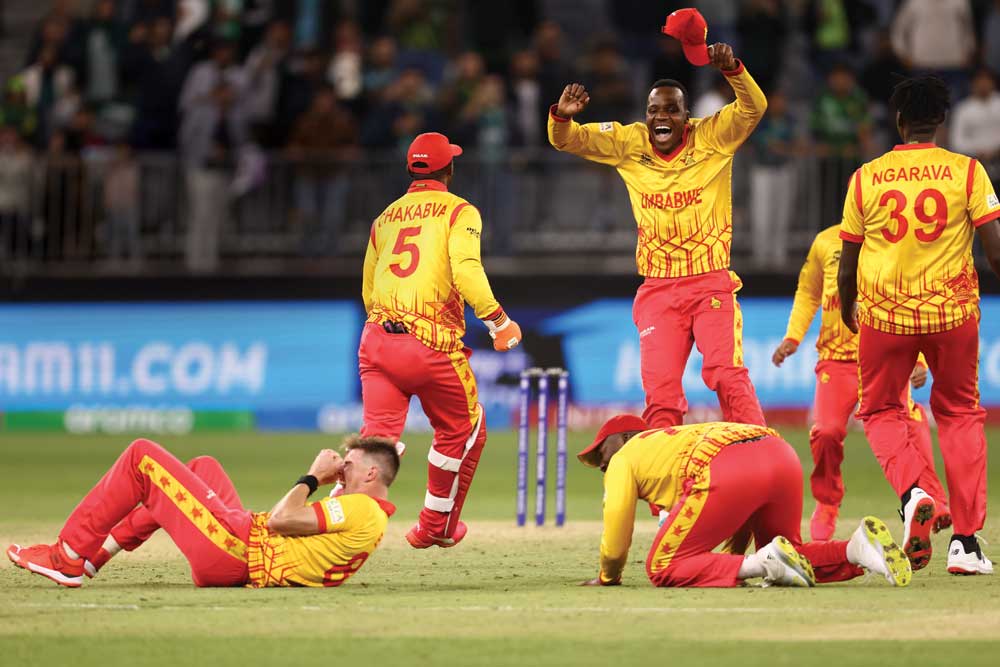 
IT’S JUST AS WELL THAT IN A T20 World Cup where two-time champions West Indies couldn’t even make it past the qualifier stage, cricket’s underdog nations have been setting the tone for the main draw with one sensational upset after another. But as much as the Namibians, Scots, Irish and Zimbabweans held their nerve in certain nail-biters and showed tremendous courage under fire in others, it is the 20-over format that has to be thanked for being the greatest leveller.

For, the 120-ball-a-side game is just the right length to allow the stragglers to hang on with the frontrunners; also, just short enough for it to facilitate a contest between the top and the bottom. Quite like how in the greatest era of tennis, the Big Three (Federer, Nadal, Djokovic) seldom lost to anyone apart from each other in five-set Grand Slam matches but seemed more prone to the odd upset in three-setters. Similarly, cricket’s stone-slingers have taken aim at the T20 giants in this edition of the World Cup and few have been spared—not England, Pakistan, Sri Lanka or the West Indies, teams that have split five out of the seven T20 World Cup
trophies among them.

Rather aptly, this tournament began with possibly the upset of upsets thus far—Namibia defeating heavyweights and recent Asia Cup T20 champions Sri Lanka. On the way to the Asian title in September this year, the Lankans had left both India and Pakistan in their wake. Just a month later in the World Cup opener, Dasun Shanaka’s side would find no answers against a country known more for its cheetahs than its cricketers.

The Namibian team is often dotted with players from neighbouring South Africa—mostly men who are either in the winter of their careers or in hot pursuit of the only opportunity to play international cricket. The most famous of the South African-turned-Namibian contingent has got to be the 37-year-old David Wiese, having not only represented the land of his birth in the past but also once having been good enough to warrant an Indian Premier League (IPL) contract.

Fast bowler Wiese did his bit at Geelong that day, with two wickets while conceding hardly any runs. But the real star against the Lankans on that crisp Victorian afternoon was the other Saffer in the side, Cape Town-born Jan Frylinck. With Namibia tottering at 93 for six in the 15th over of the first innings, Frylinck played the cameo of his life—a thrill-a-hit 44 to lift Namibia to 163, a fighting total at best. But he would again return to haunt the 2014 champions, this time with the ball. Frylinck’s gentle pace and witty variations resulted in two wickets, the second of which was captain Shanaka himself, the last-recognised batsman at that stage and Sri Lanka were soon bowled out for 108.

Several Namibians, including captain Gerhard Erasmus, blinked back tears. But Frylinck looked too stunned to emote even when the broadcast mic was thrust under his chin. “I’m a little bit speechless at the moment. What we’ve just achieved is above what we thought we could do,” said Frylinck, feeling every bit as shocked as the vanquished. To Shanaka’s credit, he didn’t blame the pitch or his players; instead, his tone and answers suggested that Namibia were in the mix to compete and compete they did.

Both Namibia and Scotland had made it to the group stages of the previous T20 World Cup, played in the UAE last year. Neither progressed that far this

time round, but not before Scotland—like Namibia—felled a championship-winning side along the way. Not just any World Cup winners but the mighty West Indies, T20 cricket’s only two-time champions. The Caribbean side were without one of their star batsmen in Shimron Hetmyer—who was dropped from the World Cup squad after he first rescheduled and then missed his flight to Australia. Still, the West Indians tend to feature in more T20 franchise cricket around the globe than players of other cricketing nations and they should have been primed to take on the far weaker Scotland, a country that had played all of two T20I matches between the two World Cups.

On a wet and bitterly cold afternoon in Hobart, not far removed from the weather they are used to in Glasgow or Edinburgh, Scotland felt right at home. Opener George Munsey faced the first ball of Scotland’s innings and the last one as well, finishing unbeaten on 66 even as wickets tumbled all around him. This knock would dwarf not just every other Scottish innings but every other West Indian innings too. Six out of the 11 scores for the West Indies ended in single digits, bowled out for 118 thanks largely to the left-arm spin of Mark Watt (he opened the bowling and took 3/12 in his quota of four overs).


Cricket’s stone-slingers have taken aim at the T20 giants in this edition of the World Cup and few have been spared—not England, Pakistan, Sri Lanka or the West Indies, teams that have split five out of the seven T20 World Cup trophies among them

“The main thing to take away from this is that we’ve played only two games since the last World Cup and these guys (West Indies) play I don’t know how many fixtures a year. So, the fact that we’ve played two T20s and to come in and beat (former) world champions is a bit of a surprise,” Watt said later. “But in our dressing room we believe that we can beat anyone on our day.” They weren’t the only ones with this mentality, for anything the Scots can do in cricket, the Irish believe they can do better.

Technically, Ireland are no longer minnows, for they are no longer an associate International Cricket Council (ICC) nation, having been granted full-time membership along with their Test status in early 2018. But in the four-and-a-half years since, they have played a total of three Test matches. So, Andrew Balbirnie’s side still feel very much like the underdogs when they are matched against cricket’s powerhouses. Still, that has never stopped them from lining up a big scalp or two at every big tournament. In this World Cup, Ireland not only beat the West Indies shortly after Scotland did but they crushed them, by nine wickets, to send the two-time champs home before the main round even began. But even that paled in comparison to their next win—against one of the favourites to win this edition, England.

Beating one’s neighbours has always been a deeply personal act in international sport, and the match in Melbourne had a strong underlying theme of vengeance. Possibly as a fallout of Brexit, the Irish had gone from locals to “overseas professionals” almost overnight in England’s domestic cricket scene. It cost their game heavily, in terms of contracts and experience. But Balbirnie was determined to prove that the cricket field was a great leveller, even if it happened to be the iconic Melbourne Cricket Ground (MCG).

In a match heavily affected by rain, Balbirnie somehow managed to focus on his twin role of leading batter and captain of the side. He got stuck in with 62 persistent runs and anchored Ireland to 157. Jos Buttler’s England should have hunted it down, if not for all the subsequent rain. Eventually, when play had to be abandoned at the MCG in the 15th over of the chase, England found themselves five runs short of Ireland by the Duckworth-Lewis System (DLS), and soon it was hard to tell if the Irish—celebrating with their family and friends in the stands—were weeping or just soaked.

“We were all back in the team hotel last night, both team and supporters, and mixing very casually and very enjoyably,” Ashley Balbirnie, father of the winning captain, is quoted as saying by the Irish Independent. Because the Irish have a propensity for the drink during celebrations, father Balbirnie quickly added that the players were very aware that they were mid-tournament. “Very conscious that they have another match soon,” said Ashley.

Something even more powerful than raw emotion stirs in the hearts of other associate cricket nations. And that is a feeling of inspiration and belief

That match, against a similarly balanced team in Afghanistan, was wholly washed out in Melbourne and that of course all but washed away Ireland’s hopes of progressing to the semi-finals. But, luckily, the weather in Perth—which lies on the other side of Australia to Melbourne—behaved itself on the same day and Zimbabwe pulled off one of the greatest upsets in T20 World Cup history. Blame it on their politics and financial situation, but Zimbabwean cricket isn’t where it used to be in the late 1990s and early 2000s. But they do have Sikandar Raza, who happens to be Zimbabwe’s best batsman, finest fielder and go-to part-time bowler all at once, with a penchant for performing against the country of his birth—Pakistan.

Despite having an inadequate total of 130 runs to defend, only Raza’s off-spin could have applied the brakes and it did—he found himself on a hat-trick and later even got Pakistan’s mainstay in this tournament, the dangerous Shan Masood, out. But Pakistan braved on and the match for Zimbabwe was as good as lost when Babar Azam’s side needed just three runs from three balls with four wickets in hand. Most teams can’t lose from there, but Pakistan did, amazingly and narrowly, by one run. But not before Zimbabwe’s wicketkeeper Regis Chakabva first fumbled the winning run-out off the last ball, adding further drama to a script that didn’t need any more.
Back home in Zimbabwe’s capital, fans thirsting for such magic moments stormed the Harare Sports Club field and danced into the night. Zimbabwe’s coaching staff would have done the same at Perth Stadium, but they had to take a break to watch Raza receive his Man of the Match award. “I am lost for words,” said Raza, grinning. “My mouth is dry because of all the emotions I am going through at the moment.”

Raza has evoked in Zimbabweans (just as Munsey has in the Scots and Frylinck in the Namibians) deep and meaningful emotions ranging from mirth to uncontrollable tears. But something even more powerful than raw emotion stirs in the hearts of other associate cricket nations, such as Nepal and the UAE, other minnows like Bahrain and the Netherlands, and other underdog cricket teams like Afghanistan and Papua New Guinea. And that is a feeling of inspiration and belief. The kind of belief which often whispers to them, “If they can do it, so can we”.