The Future of Djokovic

But for anyone expecting him to curl up somewhere in desperation, this seems improbable given his history 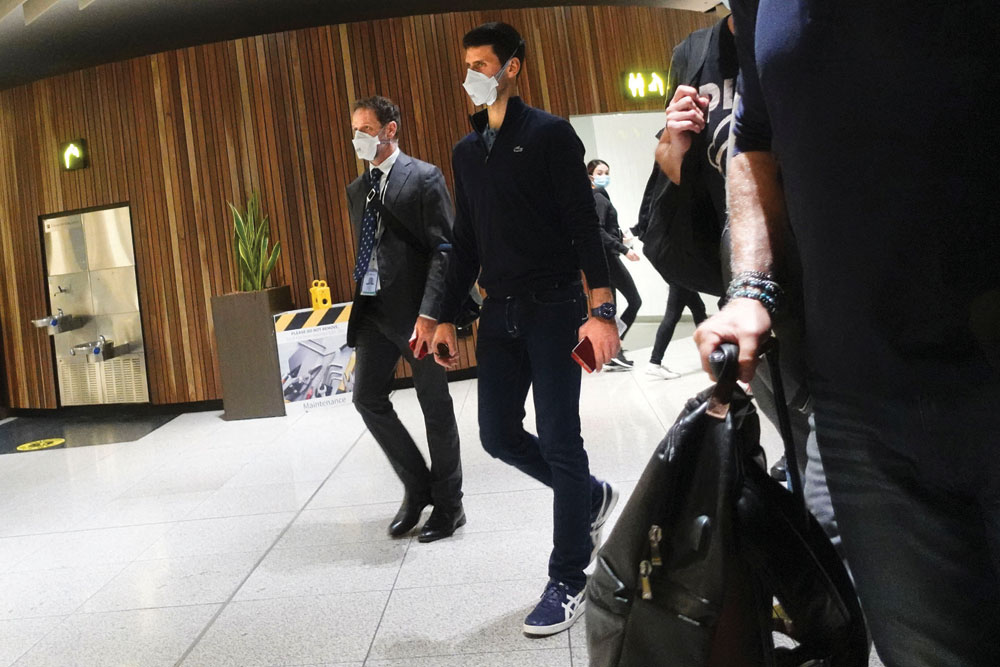 Novak Djokovic at Melbourne Airport before boarding a flight back to Belgrade, January 16 (Photo: Reuters)


AS NOVAK DJOKOVIC cools his heels back home in Belgrade after going through arguably one of the most dramatic deportations in recent history, he faces a dilemma many unvaccinated individuals now increasingly do—he finds himself barred from public spaces—to vax or to remain unvaxxed.

Except in the case of Djokovic, if he chooses to remain unvaccinated, the places of entry barred won’t just be mere shopping malls or restaurants. It will be his entry to some countries, and more crucially, their tennis tournaments, and his quest to win a record 21st tennis Grand Slam title.

A year earlier, it appeared nothing could come in the way of Djokovic and his march to tennis’ greatest collection of men’s titles. He has now lost his chance at one Grand Slam, not at the court, but at an immigration counter. And, unless he decides to vaccinate himself, it looks quite certain that even the next Slam, the French Open in May, will have its doors closed for him, with French authorities having just passed a tough law barring the unvaccinated from accessing public spaces, and categorically stating that no exemptions would be made for athletes. So rapid has his fall from grace been in the public eye—from a fortnight ago when it appeared an exception was being made for him to compete in the Australian Open, to, as the standoff in Australia continued, instances of his indiscretions during a Covid-19 infection came out in the open—that it appears unlikely any country or tournament organiser can afford to be seen as making anything close to an exemption for him.

The Australian government’s decision to revoke Djokovic’s visa reflects a major shift in how public officials approach Covid-19 requirements and potential exemptions. It also looks like the first chapter of a saga that may continue through the year. Djokovic currently runs a genuine risk of being frozen out of this year’s tennis schedule. He might, as of now, be able to compete in Wimbledon in June, but it looks increasingly certain that he will not be able to compete at Roland Garros after France adopted its new Covid pass law.

He may also be barred from participating in the US Open a few months later, too, since under current guidelines, foreign travellers must be vaccinated to enter the US, with very limited exceptions. That would mean also being ruled out of the US hard court tournaments in Indian Wells and Miami in March. And he’s likely to be barred from or face difficulties participating in a string of other important tournaments, from the Monte Carlo Masters in France, which Djokovic has won twice, to the Italian Open in May and the Madrid Open in April. In fact, according to Australia rules, having a visa cancelled disqualifies an individual for receiving one for three years. And unless this is overturned (and Australian authorities have suggested they might consider doing so), it might mean Djokovic, already 34, might never play at his favourite Grand Slam court again.

The standoff in Australia was not entirely his fault. There were mixed messages from Australian authorities over the requirements for entry into the country, and quite a bit of political grandstanding. The drama in Australia also became something else, transcending the world of sport to become a larger debate about individual liberties and collective responsibility. Djokovic’s image, however, has taken a beating. Not the most popular figure in the tennis circuit, even before the pandemic, his stance against vaccination, and the way the standoff in Australia played out, even if Djokovic does find himself at a court anytime soon, he is not going to hear the stands ringing with his name.

Djokovic may have hit a trough now, deeper than any he has so far found himself in. But for anyone expecting him to curl up somewhere in desperation, this seems improbable given his history. Djokovic has bounced back remarkably again and again many times in his career, even with a dodgy elbow, hostile crowds, and the odds stacked against him. One only has to glance at his career a few years back, when after dominating the tennis circuit, he struggled in tournaments through 2017 and some of 2018, and had to undergo an elbow surgery. In half-a-year, he had made an astonishing comeback winning the 2018 Wimbledon, and going on to regularly trump the perennial favourites Roger Federer and Rafael Nadal from then on.

And yet, even while his tennis prowess remained undimmed, the early phase of the pandemic seemed a nightmare, where he leaped from one disaster to another, most of them of his making, from the ill-advised exhibition tour in Serbia and Croatia which became a super-spreader event, his unscientific views on Covid-19, to the time he eliminated himself from the 2020 US Open after striking a ball in frustration and inadvertently hitting a lineswoman in the throat. It was as though he could not put a foot down without harming himself in some way. And yet, in just the following year, he put together one of his greatest seasons, winning the first three Grand Slam tournaments of 2021 and coming narrowly close to achieving the first men’s Grand Slam in singles in 52 years.

Can Djokovic bounce back from this setback? Is this the turning point that heralds his decline? Tennis can be a fickle sport, and any extended absence could herald a new moment. This era of the Big Three of Djokovic, Federer and Nadal has been one of the most captivating in recent sport history. They are all tied apiece at 20 Grand Slams, with none of them willing to settle for a tie. Federer is still out with an injury. Nadal hasn’t shown much evidence of his old spark in the last season. One would have expected Djokovic to go one up on all of them. He might still have a lot of tennis in those legs, but there is only more trouble brewing after the Australian affair, with even the public having turned its back on him.

What will he do? He could just get himself vaccinated and get it all over with. Or will he stick to his stance?

Not for the first time in his life, Djokovic might be competing with himself.