India reached Germany’s solar capacity in half the time. Renewable energy goals are within sight 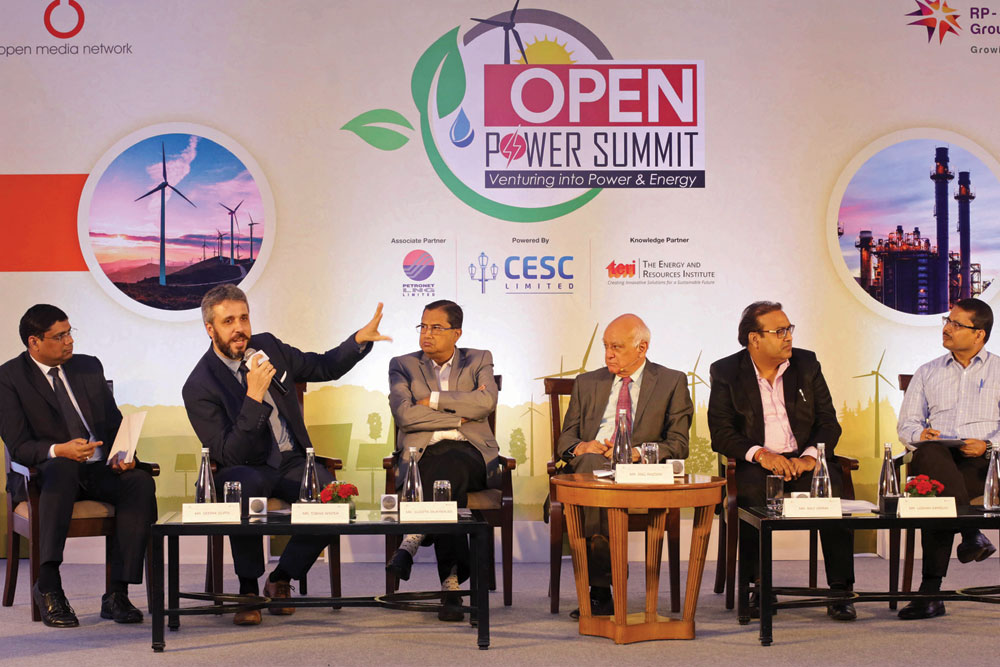 
IF CLIMATE CHANGE IS the problem of our age, then it is the dilemma for developing societies. Controlling consumption is unavoidable for the West; increasing it is imperative for the Rest. Put that way, it seems that like Buridan’s ass, the world will come to an end with both a bang of excesses and a whimper of wants. With no global authority to force communities with conflicting interests to act, is death by indecision the only possible outcome? ‘No’ was the unequivocal verdict of the experts and stakeholders who gathered on September 16th at Hyatt Regency in New Delhi for the first edition of the Open Power Summit. Organised by Open Media Network, part of the RP-Sanjiv Goenka Group, the summit brought together experts to discuss the energy and environment nexus on World Ozone Day, which celebrates the success of concerted global climate action and reminds us that living judiciously is possible without living frugally.

India’s political focus has been on a just global climate plan that works for the poorer countries. Historically, no country has improved its lot without consuming more energy. As Prime Minister Narendra Modi said at the 2015 Paris Agreement conference, “Climate change is a major global challenge. But it is not of our making. It is the result of global warming that came from prosperity and progress of an industrial age powered by fossil fuel.” According to a study by Germany’s Potsdam Institute for Climate Impact Research, published in PLOS One in 2011, developed countries need to give up about a third of the 1,100 Gt CO2 we may emit till 2050, to restrict global temperature rise to 2°C, for 104 developing countries if the latter are to achieve a Human Development Index of 0.8. The two panels at the summit deliberated on these very pushes and pulls of climate change action. BJP’s Delhi spokesperson Harish Khurana who was the chief guest said the summit provides a rare platform to bring to the Government’s attention the right ideas in fulfilling the Prime Minister’s dream of ensuring power for all—a significant part of which will be clean power generated from renewable sources—by 2022. “You are the expert. Today I’m here to listen. To take your ideas. To take them to the Government,” he said.


And there is no shortage of ideas on the energy-environment nexus and meeting the challenge the environment poses. “Sustainability is about the future and we need a transition to a low-carbon society. As part of its nationally determined contribution [under the 2016 Paris Agreement], India is committed to have 40 per cent of its power capacity based on non-fossil fuels. But that’s not the stop. Where after that?” asked the moderator RR Rashmi, a Distinguished Fellow at The Energy and Resources Institute. Our focus needs to move from supply management to changing demand behaviour, especially industrial demand, he said.

The notion of such a nexus has been around since antiquity. In the myths of Sumer, one of the world’s oldest civilisations, gods and men bring order to the earth and arrange for its cultivation, the Berkeley geographer Clarence J Glacken wrote in his 1967 classic Traces on the Rhodian Shore: Nature and Culture in Western Thought from Ancient Times to the End of the Eighteenth Century. Former Chhattisgarh Governor Shekhar Dutt made a similar observation when he said, “The nexus has always been present but was never discussed.” Given India’s low per capita energy use at only about a third of the world average, according to the Economic Survey 2018-19, coal seems the cheapest route to prosperity. But only because we are not accounting for the costs it imposes on health and environment, Dutt pointed out. “Energy expansion driven by coal will keep our life expectancy low. The nexus means that we target clean energy use which in turn ensures a healthy environment for citizens.” This is why, Dutt added, the Prime Minister announced the launch of the 121-country International Solar Alliance headquartered in Gurugram ahead of the Paris Agreement conference in 2015. By 2030, the Alliance aims to produce 1,000 GW of solar energy and invest $1 trillion in it. Technology has made solar so cheap that even by cost, coal was no longer the optimal choice, Rashmi said.

Continuing the line of thinking, Terre Policy Centre Chairman Rajendra Shende said we need to focus on the real economic values and “price coal environmentally”. As head of the UN’s Ozone Action Programme, Shende worked with 146 national governments to phase out the use of substances that deplete the ozone layer. Having eliminated the use of chlorofluorocarbon refrigerants, he said, “I feel confident that hydrofluorocarbons can also be phased out. About 0.4 degrees of the [Paris Agreement] goal of restricting global temperature rise to 1.5-2 degrees can be met by an HFC phaseout alone.” In addition to expediting policies, we need to act quickly on building climate-resilient infrastructure, he added. “Impossible things are doable. We need disruptive thinking. If European churches can mount solar panels on their walls, why can’t Indian temples?” As Rashmi asked, “The Montreal treaty which led to the ozone action succeeded because of trust and cooperation. Will Paris succeed?” Not without ideas like Modi’s global solar initiative, he said.

But the Prime Minister’s idea of ‘One Nation’ requires that we move ahead together. Nagaland Principal Secretary (IT and Power) KD Vizo said the biggest challenge facing the Northeast is that despite peace in the region for some time now, the private power sector remains sceptical. He urged the Government to push privatisation in the region and increase hydel power funding. Currently, the Centre uses Himachal Pradesh as the investment benchmark for the Northeast even though conditions in the two regions are different. To maintain its ecology and way of life, the Northeast needs to skip thermal use, he said. “We don’t want to go through the thermal energy stage of civilisation.”

Time is Janus-faced. As the Canadian archivist Ian E Wilson once said, all our knowledge is about the past and all our decisions are about the future. Appositely, the second panel of the evening, on paradigm shift in power generation and distribution, deliberated on the constraints development priorities puts on our climate action plans. “We can’t think about Mars when we are still on the moon,” said the moderator Anil Razdan, a former Union Government Secretary. While Israel and China have increased spending on research as a share of GDP as their economies have grown, India remains where it was, he said. Without home-grown research, climate adaptation and mitigation will remain either elusive or expensive, as the West remains reluctant to share the knowhow necessary to reduce emissions in developing countries without keeping them down economically. Indo-German Energy Forum Director Tobias Winter was upbeat about India’s transition to non-renewable energy. “Germany took 20 years to reach a capacity of 20 GW in solar energy, India took 10. I am here to let India learn from the many mistakes Germany made on the road to renewable energy.” Both Winter and power utility CESC Executive Director Sudipta Mukherjee pointed out that India has overinvested in coal capacities. “‘Chalta hai’ nahin chalega (business as usual won’t cut it anymore),” Mukherjee said. Thermal energy can’t go off abruptly, given the investment, he said, so we need to make plants environmentally sensitive and phase out smaller units.

Climate scientists have been warning that the window for action is narrowing by the day. And now economists like Prime Minister’s Economic Advisory Council Member Rathin Roy are alerting us India might get stuck in the middle-income trap if consumption doesn’t expand beyond the richest 100 million. As Art Buchwald said, “Whether it’s the best of times or the worst of times, it’s the only time we’ve got.” Bringing energy producers, administrators, thinkers and users to a common platform as the Open Power Summit did is the only way to ensure we make the best of that time.