The Bright Side of Evolution

And why we should not be afraid of Covid double mutations 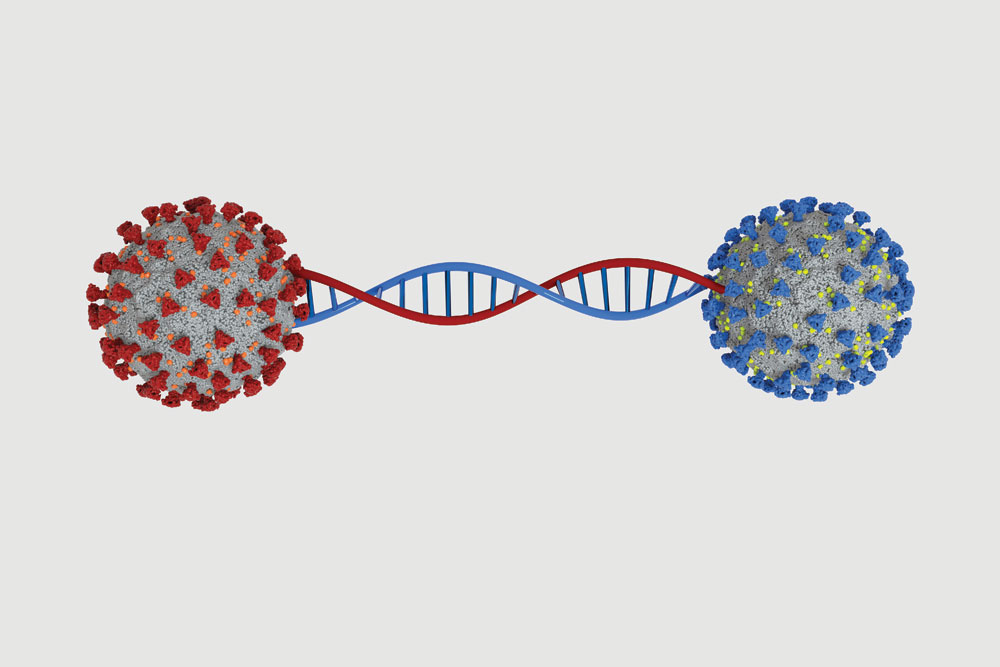 
IT WAS CASUAL jargon in the last paragraph of a ministry of health press release that thrust the phrase ‘double mutation’ into the Covid lexicon of India. The line went like this: ‘Though VOCs and a new double mutant variant have been found in India, these have not been detected in numbers sufficient to either establish a direct relationship or explain the rapid increase in cases in some States’. VOCs are ‘Variants of Concern’, which means slightly changed Covid viruses to which the human body might potentially respond differently. Indian SARS-CoV-2 Consortium on Genomics, the bunch of government laboratories looking for such VOCs, said the press release, had found 771 of them. Altogether, they had a little under 11,000 samples, and from them, 736 were found to be of the UK variant, which was responsible for a second wave there, and 34 were the South African variant. They also found that in Maharashtra especially, as compared to December last year, ‘there has been an increase in the fraction of samples with the E484Q and L452R mutations. Such mutations confer immune escape and increased infectivity. These mutations have been found in about 15-20% of samples and do not match any previously catalogued VOCs.’ This was the ‘double mutant’ in question and you wouldn’t be wrong in thinking it was new. But curiously, at a press conference, Balram Bhargava, the director general of the Indian Council of Medical Research (ICMR), the body that spearheads the medical response to the pandemic, said that there was no such thing as an Indian variant.

Probably, those who drafted the press release with the word ‘double’ in it should have been circumspect using the word. While there is a time and place to exploit the power of language, a virus that set off a pandemic is not the arena for it. Because it is not really clear what exactly is a double mutation. The novel coronavirus, for instance, began with a new virus which used to be at home inside bats, but suddenly found that it could now infect humans too. From that one, there are now, as we are told by the health ministry, at least 771 variants in India alone. So there must have been 771 mutations. ‘Double’ seems to be just a labelling by picking on one strain. And there have not been only 771 mutations either. These are only the ones that they are concerned about. Otherwise, the mutations that occur in the virus are too many to keep track of. In one interview to Indiaspend, Rakesh Mishra, director of the Centre for Cellular and Molecular Biology, said that in India mutations that have been recorded will cross 10,000 soon. ‘This double mutant that we just talked about is probably the new one that has emerged and is presenting in significant (20%) numbers, although only in Maharashtra. Elsewhere in the country, it is less than 1%,’ he was reported saying. It still doesn’t make it necessarily more threatening even if it survived better.


It is in the nature of the pandemic that some variant or the other will dominate as the virus struggles to overcome conditions railed against it. In an interview to the North Carolina State University’s Applied Ecology department publication, Matt Koci, a virologist and immunologist, gave an example of how this might happen precisely because of efforts humans are making against the virus, like social distancing and masks. Even as we stem the spread, some viruses get an advantage over others and then they replicate and become prevalent. He gave the example of the UK variant, saying: ‘The virus spreads in coughs and sneezes and gets breathed in by its new victim. It almost certainly takes more than just one virus particle to make you sick, but how many, we don’t know. For argument’s sake, let’s say it takes 5,000 individual viruses to make you sick. If you’re talking to someone who has the virus the closer you are to them the more virus you’ll be exposed to, especially if you both aren’t wearing masks. When you both put on masks and you back away from each other beyond 6 ft, you’re doing that to reduce the number of viruses you might be exposed to. Ideally to a level below how many it takes to establish an infection in you. So now instead of breathing in 5,000 viruses, you breathe in 500. But if the virus randomly makes a small change in its spike protein so now it can bind to your lung cells more tightly, more efficiently, maybe that virus variant doesn’t need 5,000 viruses to make you sick. Maybe that one only needs 1,000 or even 500. So now that strain will spread more efficiently through the population because it can get around the selection pressure we imposed on it.’

One branch of dinosaurs called theropods evolved into birds through a series of mutations. When the Covid virus changes, it might not even be a bad thing. Evolution is designed for survival

THAT ‘RANDOM SMALL change in its spike protein’ is a mutation and that is in fact how all life also developed on earth. Evolution is a function of mutation, and some theorise it is even a story that might have begun with viruses. Viruses are in a halfway house between animate and inanimate matter. They cannot live on their own and need a cell to replicate. By itself, the virus is lifeless. Inside a cell, it is alive. How it is defined with respect to life is dependent on what its present situation is. What came first from the primordial chemical soup billions of years ago—the cell that brings the virus to life, or the virus itself that was followed by the host? There are theories advanced for both hypothesis. But both now evolve as they reproduce because the software of creation is flawed and there are no perfect copies in reproduction. The one that comes next might have characteristics making it resilient or weaker in adapting to the environment. And it is not predictable. Neanderthals were physically stronger and more aggressive than Homo sapiens even though both came from the same source that mutated in different ways. But it was the latter who went on to dominate the earth because of other strengths. For example, one paper from Stanford put it down to the ability to learn faster. The value of mutations can only be made sense of in retrospect. Cockroaches lived along with dinosaurs and we all know who is still standing. But dinosaurs are not entirely effaced either. One branch called theropods evolved into what we see when we look up at the sky—birds. This happened through a series of mutations. A Scientific American article that looked at research on this front said: ‘Discoveries have shown that bird-specific features like feathers began to emerge long before the evolution of birds, indicating that birds simply adapted a number of pre-existing features to a new use. And recent research suggests that a few simple changes—among them the adoption of a more babylike skull shape into adulthood—likely played essential roles in the final push to bird-hood. Not only are birds much smaller than their dinosaur ancestors, they closely resemble dinosaur embryos. Adaptations such as these may have paved the way for modern birds’ distinguishing features, namely their ability to fly and their remarkably agile beaks. The work demonstrates how huge evolutionary changes can result from a series of small evolutionary steps.’

When the Covid virus changes, as new variants come, it might not even be a bad thing. Evolution is designed for survival and the virus’ ability to do so rests on the people it infects not dying. The virus is keen to infect faster but, if possible, at no danger to what it is infecting. What it really wants is easy coexistence and mutation might be its endeavour towards that.

As an article in Wired said: ‘A virus that kills too efficiently doesn’t get to be a virus for very long, because dead hosts can’t walk around breathing on uninfected-but-susceptible suckers. So one hypothesis says that these successful mutations are mostly changes in the way the virus infects. That is, they improve the way the virus gets into a human, or gets into a human cell, or reproduces in that cell (because the more virus a person makes, the more they give off, and the more likely it is to get to some other person).’ If the best outcome for the virus is the same as that of humans, the eventual outcome for both species is going to be co-existence. Even if no vaccine were discovered, this would be the eventual end. Many viruses began as killers and then became harmless. But that is only at a species level. Evolution doesn’t really care for individuals. Which is why you should still get vaccinated.