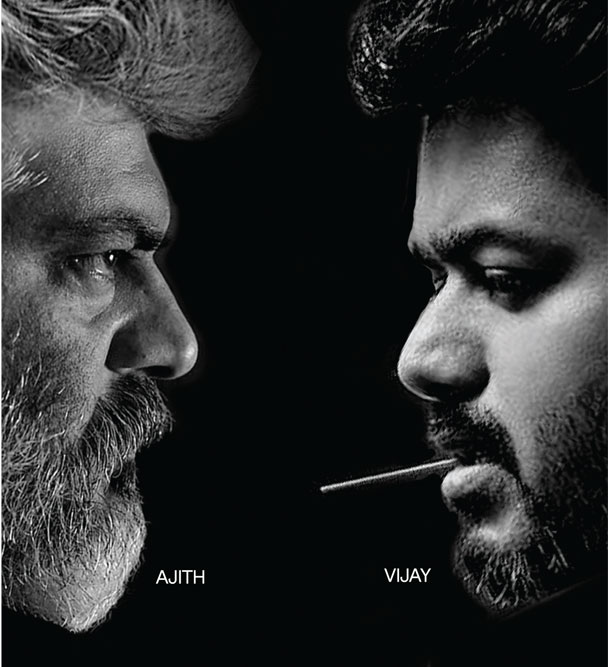 
THE LAST TIME Thala (leader) Ajith clashed at the box office in the same week with Thalapathy (commander) Vijay, was in 2014. The films were Jilla and Veeram. Jilla, where Vijay starred with Mohanlal, was an action comedy. Veeram, which is being remade as Kisi Ka Bhai Kisi Ki Jaan with Salman Khan this year, was a “family entertainer” with lots of action, starring Ajith. Both movies did well at the box office, with Jilla making `85 core on a budget of `70 crore and Veeram making `130 crore on a budget of `45 crore.

This year, the two superstars clashed at the box office again, on the same day, with their fans nearly breaking into an online war at the idea of one surpassing the other. The stars kept silent, barely promoting their own films (except Vijay’s humorous speech at the audio launch), leaving it to their producers and directors to speak for them. Again, both Varisu, an action comedy starring Vijay as a maverick son, and Thunivu, with Ajith playing a bank robber possessing Michael Jackson’s moves, have done exceptionally well, proving the second generation of Tamil superstars are still big box-office draws. Since releasing on January 11, Vijay’s film has collected `222 crore worldwide while Thunivu has earned a total of `153 crore.

Boney Kapoor, producer of Thunivu, his third film with Ajith on the trot (Nerkonda Paarvai in 2019, a remake of the 2016 Hindi film hit Pink; and Valimai, 2022), says each star has his own constituency, which they’ve nurtured for three decades. Vijay, 48, son of a film producer, began his film career as a lead actor with Naalaiya Theerpu (1992). Ajith, 51, is half-Sindhi, began his career with a small role in the 1990 Tamil film En Veedu En Kanavar. They are forever looking to give their devoted fans something new, something different, whether it is a new look from Ajith in Thunivu, or a fresh action sequence from Vijay in Varisu. Each of them has memorable films in their careers, which have redefined Tamil cinema.

Vijay is a box-office champion and is seen as Rajinikanth’s successor as a popular star, with movies such as Mersal (2017), where he played triple roles, or Bigil (2019) where he was the coach of women’s football team. Ajith has had a more chequered career, taking frequent breaks from cinema to indulge his passion for car racing. He is also more familiar to northern audiences with roles in Asoka (2001) and a cameo in the Tamil version of Sridevi’s comeback Hindi film English Vinglish (2012). He has been somewhat more experimental in his career, whether it was playing a struggling filmmaker in Rajiv Menon’s Jane Austen adaptation, Kandukondain Kandukondain (2000), or the thriller Citizen (2001), which had him in 10 roles.

Writer-actor Mohan Raman, who has been observing their careers for decades, says the rivalry is only between their fan associations, not the stars. “Both are currently very marketable stars and both stay away from publicity, Ajith more, Vijay a little less so,” he says, noting that they have cemented their place in the next generation of stars after Rajinikanth and Kamal Haasan, along with Chiyaan Vikram and Suriya. All of them are slowly modifying their roles to suit their age, even as another generation led by Dhanush, Vijay Sethupathi, Karthi and Jayam Ravi takes hold.

Their box-office universe has expanded with the assertion of the Tamil diaspora and the Covid-induced interest in other cinemas in the north. Their work is also more accessible to everyone, exposing to the world the acknowledged and unacknowledged remakes of their movies by Bollywood stars. Vijay’s Pokkiri (2007), itself a Telugu remake, was repackaged as Wanted in 2009, kicking off Salman Khan’s resurgence, while Thuppakki (2012) was remade in Hindi in 2014 with Akshay Kumar and Sonakshi Sinha as Holiday: A Soldier Is Never Off Duty.

But their fandom exceeds that of Bollywood stars by miles, as does their mystique. Their digital footprint is minimal and when they give interviews or speak, it’s an occasion worth recording. That may explain their ability to have weathered changes in technology and society over 30 years, a period coterminous with the more celebrated Khans of Bollywood.