Sushmita Sen has always been too individualistic for Bollywood’s cookie-cutter heroines. She finally comes into her own with a web series where she plays a cigar-smoking, cold-blooded drug lord 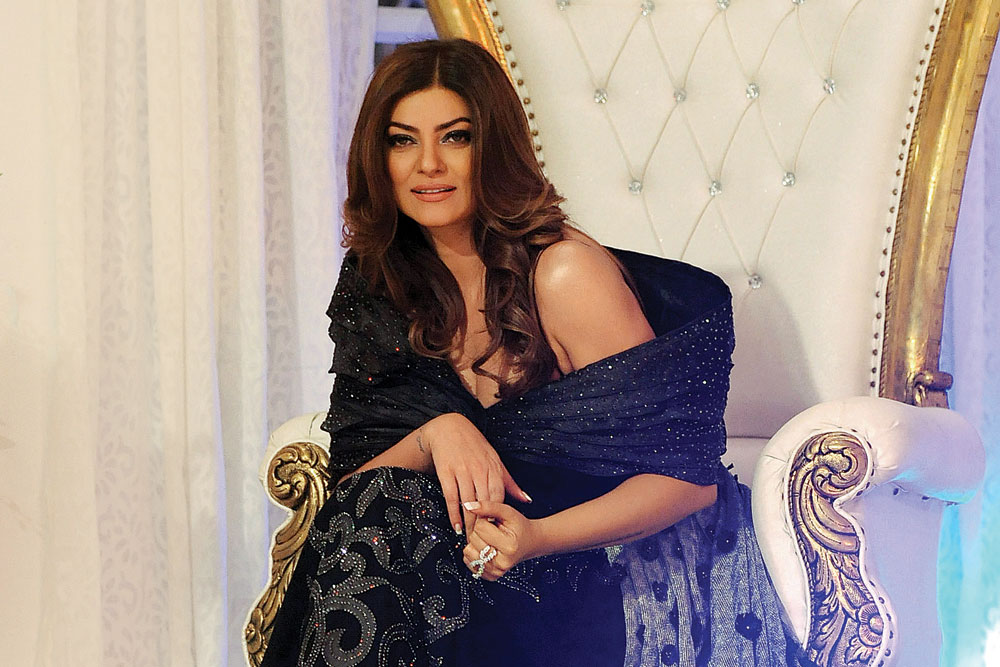 
THE RAISED HANDS, framing the mouth, a perfect O of amazement, echoed throughout India in 1994. As a teenager, all of 18, Sushmita Sen won the first Miss Universe pageant for India, striding towards the crown with a freshly won confidence from a newly liberalised country. In a glamour industry that has habitually infantilised women, Sen has always stood her own ground. Famous for the past three decades, as much for embodying global Indian beauty as she has been for pioneering a new kind of family, she has finally delivered on her potential with a stirring performance as a fierce mother-turned-drug boss across two seasons of Disney+Hotstar’s international Emmy-nominated Aarya.

Not a moment too soon. In a film career with more stops than starts, she has usually played the distant object of the hero’s attraction, most famously as a money-obsessed sophisticate to Salman Khan’s married man in David Dhawan’s comic Biwi No.1 (1999) and the sizzling chemistry teacher to Shah Rukh Khan’s officer-turned-student in Farah Khan’s delightful caper Main Hoon Na (2004). But it is not so much her film roles as her real life that has had audiences in thrall, whether it is appearing hand-in-hand with her married lover, director Vikram Bhatt, on Rendezvous with Simi Garewal in 1997, or adopting a little girl as a single, unmarried woman in 2000.

As Radhika Parameswaran, Associate Dean, The Media School, Indiana University, Bloomington, says, Sen provides a complex template for a beautiful figure of transgression, a woman who meets beauty norms while at the same time flouting conventions of normative middle class/upper caste femininity, which dictate submitting to compulsory marriage, marrying a powerful and successful man, and then procreating. “She does defy and dare to disobey some of the entrenched rules of domesticity—she has had numerous relationships and none culminated in marriage. She allows her fans and audiences to participate vicariously in this seemingly cosmopolitan and westernised culture of defiant and disobedient womanhood, but at the same time her discourse of nurturing motherhood also reinstates her within the framework of dominant femininity, although with a different twist,” she says.

And therein lies the reason for her enduring appeal, which Aarya taps into so well. She is the woman who will do anything to protect her children. “Apne panje bahar nikalo (Un-sheath your claws),” says Daulat, her family’s long-time Man Friday, played by Sikandar Kher in Aarya. Sen, 46, has always had a maternal instinct. “My father would always say I would mother him and I would always say it’s because he would call me Ma,” says Sen, who is, as many Bengali girls are, lovingly referred to as “Ma” by her parents. In Aarya too, as a woman who discovers her family’s diabolical involvement in the drugs business and ends up alienating and then befriending Russian thugs, her primary instinct was always that of a protective, if wounded tigress, whether it was holding on to her children or exposing the children of her rival’s family to a dangerous game of brinkmanship. As her co-star in Aarya, Maya Sarao, says, “She is warm, maternally caring, but at the same time, a great buddy as well.” In real life too, having adopted two daughters, Renee in 2000, and Alisah in 2010.


WHAT YOU SEE is what you get with Sen, who engages with fans on Instagram with considerable honesty, whether it is informing them of a romantic break-up or of a debilitating illness. She did both recently, when she announced an amicable parting of ways with her younger model boyfriend, Rohman Shawl, as well as the return of a variation of Addison’s disease, also called adrenal insufficiency, that struck her between 2014 and 2018. She had to keep it in check with steroids which wreaked havoc on her physical appearance in a world where perfection is the basic requirement. She started to put on weight and looked and felt like a different person. She worked through the second season of Aarya with a flare-up of the disease as an autoimmune condition, which meant she was running low on energy. “In the middle of a scene I would start coughing and my Veer [her older son in Aarya] would get me a glass of water. Everyone on set was so fantastic. But it was my body saying there were issues I had to deal with. My body gave up, refusing steroids,” she says. But she needed to pull through, especially because she knew her children needed her and people in her office depended on her. She didn’t have the luxury of staying in bed all day and says it was one of the best things that happened to her. She went to Germany and London for a surgery and is now waiting for new blood tests, she says. Ram Madhvani, the director of Aarya, says, “Working with Sushmita is not just about collaborating with an actor but being in the presence of an energy, an aura, and a world view (or should I say a universe view) that I feel privileged to have experienced.”

Her warmth is innate. Tanuja Chandra, who directed her in Zindaggi Rocks (2006) where she plays a famous singer, says she is a loving person. That’s the thing that reflects in her personality right from the start. “She’s also funny, very smart, deeply interested in the life she lives and the people in it. She’s an independent-minded, modern woman who has I’m sure, inspired many women in India to follow their hearts’ deepest desires.”

And finally perhaps the entertainment world has caught up with her, writing parts that fit her alert femininity. “The thing about cinema,” says Sen, “is art imitating life, so you have to live your life, you have to observe life. I used to find it very interesting that as a young person, the Indian film industry or even the Western film industry would consider an actor’s career done by the time they were 28. And you looked at it and you wondered because that is when you are starting to learn the lessons introduced by your teenage years. You barely scratch the surface of these in your twenties and then when you start to put the lessons into practice in your thirties, you go through a midlife crisis. It’s so important to exemplify and celebrate life in all its facets in cinema. But then you’re told your career is over.” She goes on, “I have to say. I am one of the blessed few who despite being an actress since the ’90s has been given this opportunity to come back and go past college love stories and dancing around trees. Thank God there are people today who are willing to do that. It’s such a liberating time for everyone,” she says. In the ’90s, the industry was not sure what it wanted her to play. She was constantly told to be vulnerable, to play vulnerable, dress differently, not give interviews baring her life, be a lot more contained about her sexuality.

I am one of the blessed few who despite being an actress since the ’90s has been given this opportunity to come back and go past college love stories and dancing around trees, says Sushmita Sen, actor

When she joined the industry, she was in her early 20s, and because she had started her life on the international stage at a very young age, she was forced to think beyond the norm. She got to explore the world and travel to 23 countries after not having gone beyond Sri Lanka. She was suddenly meeting people who had lived more, experienced more. At a very young age she learnt that she was a very small part in a very big picture. So therefore if she wanted to be part of the big picture, she had to be more of herself, to explore every opportunity with tremendous audacity and then she entered an industry where she was told to contain it. “‘You come across too strong, no hero wants that,’” she was told. “‘You don’t look like the classic heroine. You’re too tall, too thin.’ Too many toos. And you’re told, ‘You don’t have to sound so intelligent. It intimidates people.’ And here I was thinking I didn’t even sound that intelligent. Not being my best was already bothering people so imagine if I could be my best, what that would do. A lot of people told me a lot of things and because of my experiences with the world I took it with a pinch of salt. And I thought maybe it would take me decades to find acceptance and it did. But the question always was do I have the holding power to sustain this or do I change right now and be done by their definition at 28? I chose to evolve.”

She says she came from a modest and protected background with her father being in the Air Force so when life gave her an opportunity to make her country proud, she was in a state of tremendous gratitude and decided to work hard. The only way to live was to be true to that little girl that the world opened up for, and not lose that sense of wonder in the process of wanting to grow. To live by a need for approval and applause but to do things as respectfully as possible. “It’s a fine line and it’s taken me a long time to get here. I did have to watch my step. We’re so conditioned to get in line and follow the herd. And it is at that point the easier thing to do. If everybody tells you something, it must be right. But I think that’s changing slowly,” she says.

So what advice would she give to that little girl? Nothing, she says. “I would take suggestions from her even today. The only thing I would tell her is, ‘Never ever lose this wonder, young lady.’ When in trouble or crisis I have a way of referring to the DNA of that little girl. What she accomplished with no experience, no putting up a front, no financial support, that was so pure,” she adds.

Not everyone’s honesty is accepted or applauded, she says. She took certain calls in her life—whether it was to speak up or be silent, stay with someone or walk away from someone—she was always going to be honest to herself. “If people find a source of inspiration and motivation in it, then I am like wow,” she says.

Aarya has given her a role she can enjoy. She has now become even more selective. She has manifested Aarya, she says, and is now going to do something similar with a love story with Shah Rukh Khan. “It’s big on my wish list,” she says, “to leave behind a feeling, which is more than a film.” And to always be that 18-year-old in spirit whose life changed, but whose accomplishment wasn’t just hers but on behalf of an enthralled country.