Lack of clearance meant stranded students had to travel afar westward, not to the nearby Russian border 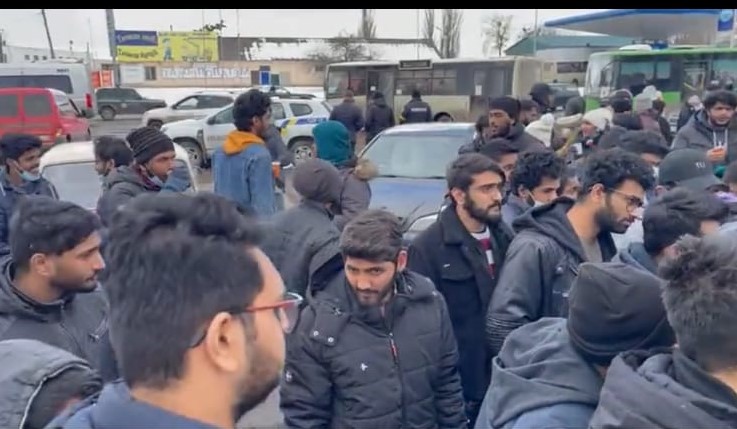 Close to 700 Indian students from Sumy, eastern Ukraine – most of whom are from the Medical Institute of Sumy State University and were taken on buses to Poltava in central Ukraine on March 8 after a 13-day-long anxious wait – will be evacuated via Poland, sources close to the matter said. The second leg of the journey, from Poltava to Lviv in western Ukraine, is a 11-hour train ride through the war-hit nation. “From Lviv, as usual, they will be taken on the road across the Polish border. This means they will take flights to Delhi or Mumbai from Warsaw,” says one of them.

After leaving Sumy early on March 8 after close to a two-week-long delay due to a raft of reasons, including lack of clearance from local and national authorities, it was finally decided that the students would be evacuated from the western side of Ukraine. Earlier, Moscow has agreed to help with evacuating the Indian students via the eastern border of Ukraine to Russia. Those managing the transport of students were asked by Russia to take the students by road from Sumy to nearby Sudzha from where the Russians promised a safe passage to their territory. But clearance from Ukrainian authorities to travel that short distance never came.

The students at Sumy had to bear the brunt of the war that started with the Russian invasion of Ukraine on February 24 after students from elsewhere in the country, especially the western parts and even those from Kharkiv, which is some three hours from Sumy, were evacuated earlier at a massive risk in the face of heaving shelling and clashes between Ukrainian and Russian forces. The students at the Sumy State University had to survive for some days without power and water supply following a bombing. They had to depend on melting snow for even the most basic needs like drinking water, and had to stop cooking because they had no resources.

On the tenth day of the war, physically and emotionally strained at having to survive with depleting rations and cold weather amidst a power outage, the students here had released a video threatening to march to the Russian border at their own risk. They later relented after they were pacified by officials of the Indian embassy in Ukraine. “We were fed up with what was going on and the uncertainty was literally killing us,” Malavika Manoj, a third-year MBBS student at the university, had told Open.

Finally on March 8, the Indian embassy collaborated with other agencies and authorities to transport students trapped at Sumy. “Happy to inform (you) that we have been able to move all Indian students from Sumy. They are currently en route to Poltava, from where they will board trains to western Ukraine,” MEA spokesperson Arindam Bagchi tweeted on March 8. Meanwhile, the Indian embassy in Kyiv asked all stranded Indian nationals to make use of the “humanitarian corridor” for evacuation. There were occasions when the Russians announced a ceasefire in certain parts of the country to ensure evacuation of civilians.

A few students from Sumy told Open that their evacuation was delayed also due to pressure from local students and teachers who were not keen for them to leave. “Some students had leaked information to fellow Ukrainian students about the date of their trip outside of Sumy. That led to local anger at them being left alone at the mercy of the advancing Russian troops,” one of them said.

While such worries are par for the course in a war, there is growing worry in Ukraine, home to aggressive groups of Neo Nazis, that such groups are in a campaign to bring foreign fighters to Ukraine. “North Americans and Europeans are coordinating meetups, carpools, and border-crossings largely to Ukraine’s Azov Battalion,” says Rita Katz, one of the world’s foremost experts on terrorism. The director and co-founder of the SITE Intelligence Group, she has studied, tracked, and analysed international terrorists, the global jihadist network and terrorism financing for more than two decades. In the past, Katz has briefed government officials in the White House, Department of Justice, Department of the Treasury, and the Department of Homeland Security on terrorist financing and recruitment networks.

She cautions, “In case it’s not already obvious, this neo-border Nazi campaign—as with Ukraine’s far-right paramilitaries—is not representative of the country’s multi-ethnic, democratically minded society.”

Conspiracy theories are rife about Ukrainians being supplied with lethal weapons that could either be misused by Neo-Nazi elements or may fall into the hands of the Russian soldiers. In fact, although the existence of certain biological research labs was considered a conspiracy theory, US Under Secretary of State Victoria Nuland herself confirmed it, saying the US was working with Ukraine to prevent biological research facilities from falling into Russian hands. Nuland had come under attack from certain sections of military scholars for exploiting Ukraine’s insecurities to provoke Russia into a war. US authorities, for their part, deny such accusations.