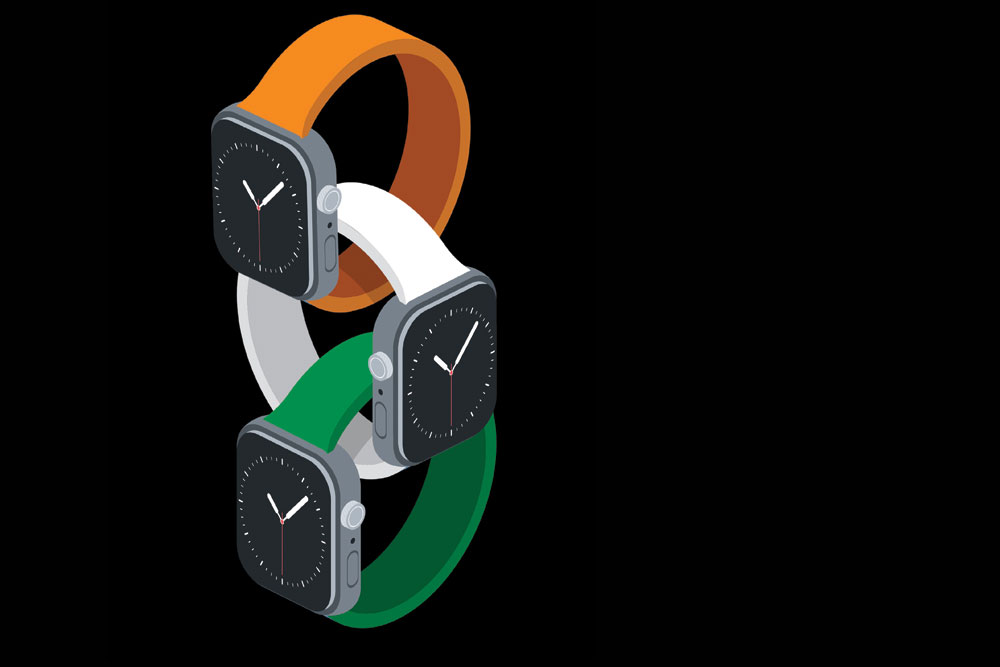 
BY THE TIME Shayne Colaco began attending college about a decade ago, like many in his age group, he had abandoned his watch. To many millennials like Colaco, a watch was an anachronism from an earlier generation, a pointless accessory that told you something that the smartphone in your pocket already did.

“It just didn’t seem to make sense anymore,” he says.

But two years ago, when the pandemic first struck, for the first time in many years, Colaco strapped on a new watch. The 30-year-old Mumbai-based artist didn’t want it to tell the time. He wanted it to tell him his SpO2 level (the oxygen saturation level).

Elements such as these that can be tracked on smartwatches—and that go way beyond the step counts and sleeping patterns that activity trackers measured a few years ago, including everything from our SpO2 levels, resting and workout heart rates, pulse and respiration rates, precise workout routines, VO2 max (or the maximum rate of oxygen consumption attainable during physical exertion), and a dizzying number of other metrics that very few apart from the professional athlete thought necessary to track—have led to what can only be described as an explosion in the market of smartwatches in India.

From one that barely existed till a few years ago, India recently became the second-largest market globally for smartwatches. Global shipments of smartwatches grew by just about 13 per cent year-on-year in the second quarter of this year, according to a recent report by Counterpoint Research which specialises in research in the technology, media and telecom industry. But the Indian market exploded by 312 per cent in the same period, overtaking China for the second spot. According to another recent report, by the International Data Corporation, 6.4 million smartwatch units were shipped in the second quarter in India, a figure which was just 1.6 million in the same period last year.

“The numbers are just mindboggling,” says Aayushi Kishore, whose firm Fire-Boltt is one of the largest sellers of smartwatches in India. This growth in the Indian market, admittedly at a time when the Chinese market was affected by Covid-related lockdowns, was driven largely by homegrown Indian brands. Two of these brands, Fire-Boltt and Noise, have now, according to the Counterpoint Research report, broken into the list of the top five smartwatch brands globally.

Back in 2015 at the start of the smartwatch era, Apple’s CEO Tim Cook had pitched the Apple Watch as a piece of aspirational tech. It was an entirely new type of device, and like many Apple products, also prohibitively expensive. One could quibble that it replicated many of the functions our phones already did, sort of liberating us from the inconvenience of reaching into your pocket every time the smartphone trilled with a notification but doing little more apart from that. But in recent years, the smartwatch has been pitched as a medical and health device. And a number of companies have entered the fray, pushing in more and more features into increasingly inexpensive models.

The pandemic was a big trigger. “People were talking about things like SpO2 levels and heart rates in their houses for the first time,” says Vishal Gondal, the CEO, and founder of GOQii, whose smartwatches began to see a massive growth once Covid spread to India. “We saw a massive shift in consumer behaviour. People wanted to take charge of their health.” Unlike other companies selling smartwatches, GOQii’s business model isn’t built on the hardware, but rather around it, with its devices bundled together offering consultations with health coaches and doctors on a subscription-based business model.

This interest in healthcare during the pandemic also got other established firms, such as boAt, most widely known for its audio products like headphones and earphones, entering this new market. “[People] were looking for health-related features, such as SpO2, heart rate, step tracking and sleep tracking, which triggered our strategy to enter the wearables category,” says Vivek Gambhir, the CEO of Imagine Marketing, the parent company of boAt. When they launched their first product, boAt Storm in December 2020, Gambhir says, over 10,000 units were sold in under a minute.

Colaco began to use a GOQii smartwatch in 2020 because, alarmed by the rising Covid cases, he wanted to keep a check on his SpO2 levels. Having shifted to Goa during the pandemic, he also realised, he says, how unhealthy he had become. “I was all skin and bones,” he says. “I’ve always been sort of skinny and underweight. But using the coaches [through the platform] I was able to chart out a better nutrition and fitness pattern.” 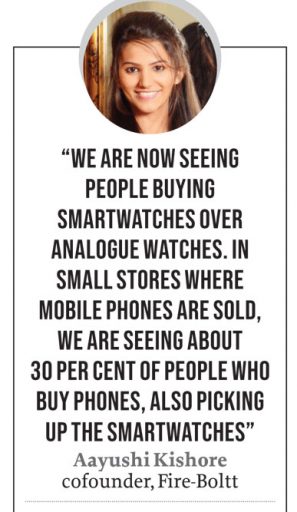 Ankit Kumar, who works with a startup in Bengaluru, was similarly drawn to smartwatches during the pandemic. A sedentary lifestyle coupled with poor food habits had seen the now 24-year-old’s weight ballooning to 110 kg by the end of 2020. “I had become very unhealthy and I was looking for a way to reduce weight,” he says. He turned to technology. He began by using a new type of device known as Cyborg by the firm Ultrahuman, which continuously monitored the body’s glucose levels through a coin-sized patch on the skin, providing insights on how to tailor one’s food and exercise habits. But he later went for a smartwatch by Amazfit instead. Using it to track his workout routines, he transformed his lifestyle over the next year-and-a-half, working out daily, eating carefully, and doing intermittent fasts, and has brought his weight down to 81 kg.

Whether this outsourcing of our well-being to a watch and the constant monitoring of our vital signs lead to better health is still not conclusive. A 2016 study tracking nearly 500 adults for over a year, for instance, found that those trying to lose weight while using some form of wearable technology actually lost less weight than those who didn’t wear one. Another 2019 paper that reviewed studies conducted on the benefit of wearable devices found “little benefit of the devices on chronic disease health outcomes.” In India, there was another reason why smartwatches became very popular. They suddenly became very affordable. Working with manufacturers in China and Taiwan, Indian firms began to flood the market with smartwatches at prices as low as ₹1,500.

The pitch of the importance of tracking your vital signs, which was once a predominantly urban concern, has since expanded into smaller cities and towns. Around 70 per cent of Fire-Boltt’s smartwatches, for instance, is purchased by users living outside the metros. “We get orders from places we haven’t even heard of,” Kishore says.

Soumik Roy, a 30-year-old sales professional between jobs in Durgapur in West Bengal, is completely sold on the idea of how important it is to track your vital signs. He isn’t someone who splurges on the latest devices in the market, apart from occasionally buying a new phone, but he has come to believe that a smartwatch is an essential device. “It tells me everything I need to know about how my health is,” he says. “And there are so many other conveniences, I have realised. Like instead of stopping my bike when I am riding to take a call, I screen the calls on my smartwatch, only picking up those that are necessary.” Roy admits however that in the two months since he has purchased a Noise smartwatch, it hasn’t really led him to tweak his lifestyle.

When Fire-Boltt first launched its smartwatches in 2020, the company’s attempt was to offer smartwatches with advanced features at an inexpensive rate. “There was a whole untapped market of those who aspired for an Apple Watch or a Garmin but found them unaffordable,” Kishore says.

Fire-Boltt had started in 2015, when Kishore, along with her brother Arnav, co-founded the company. Their aim, Kishore says, was to embed technology into fashion. Arnav, who was a national-level tennis player and had experience using sensors to optimise his game, was especially interested in introducing such technology in their products. The first five years of the company saw slow growth. They had introduced a smart shoe, in collaboration with Garmin, fitness trackers, and a fitness app. But in 2020, once the pandemic hit, they took a pivot towards smartwatches. “Our first watch was priced at ₹2,999, and it flew off the shelves in no time,” Kishore says. They launched a series of smartwatches called the Ninja in 2021, which at its entry level, cost just ₹1,999. “Those ones were selling in the thousands every day,” she says.

What helped was an aggressive marketing campaign built around Bollywood stars and cricketers, and the wide variety of features offered—from Bluetooth calling facilities, where through an inbuilt speaker and microphone you could talk directly through your smartwatch, to the capacity to track advanced metrics and larger AMOLED screen displays—in the smartwatches whose prices ranged from ₹1,500-7,500. 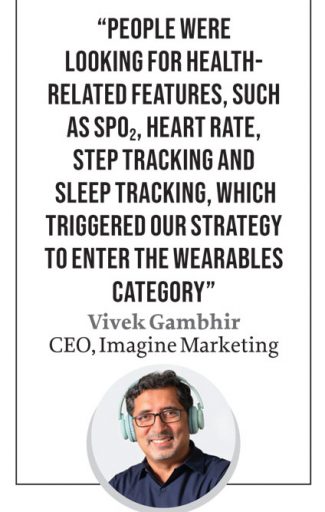 According to her, more innovations are in the pipeline, including features such as an inbuilt camera and the ability to watch videos on its screen. “We sold smartwatches worth ₹500 crore last year. This year, we are set to sell 12 million smartwatches and cross ₹2,000 crore [in total sales],” she says. The company is also expanding into territories outside India, in Singapore and Vietnam next, followed by likely pushes into the US and European markets. It is introducing a range of stylish female smartwatches, and another just for kids.

While the impetus for the smartwatch’s popularity in India might have been its pitch as a wellness device during the pandemic, it is now, according to its sellers, increasingly seen as a lifestyle product. “Not everyone is buying it for fitness reasons. It’s become more mainstream now. It’s being seen as something fashionable and stylish to wear,” Kishore says. “We are now seeing people buying smartwatches over analogue watches. In small stores where mobile phones are sold, we are seeing about 30 per cent of people who buy phones, also picking up the smartwatches.”

According to Gambhir, smartwatches have now evolved into standalone smart devices capable of functions far beyond just tracking someone’s health and fitness routines. “Smartwatch technology has evolved very well with powerful chipsets,” he says, pointing to features like a built-in Alexa, the ability to make calls and track notifications, apart from improved screens.

“It is going the way of the smartphone,” Kishore says. “The smartwatch is becoming something essential like it.”