The tactic and the goal of the farmers’ protest were devious: ‘invade’ Delhi in such numbers that the government is forced to react violently 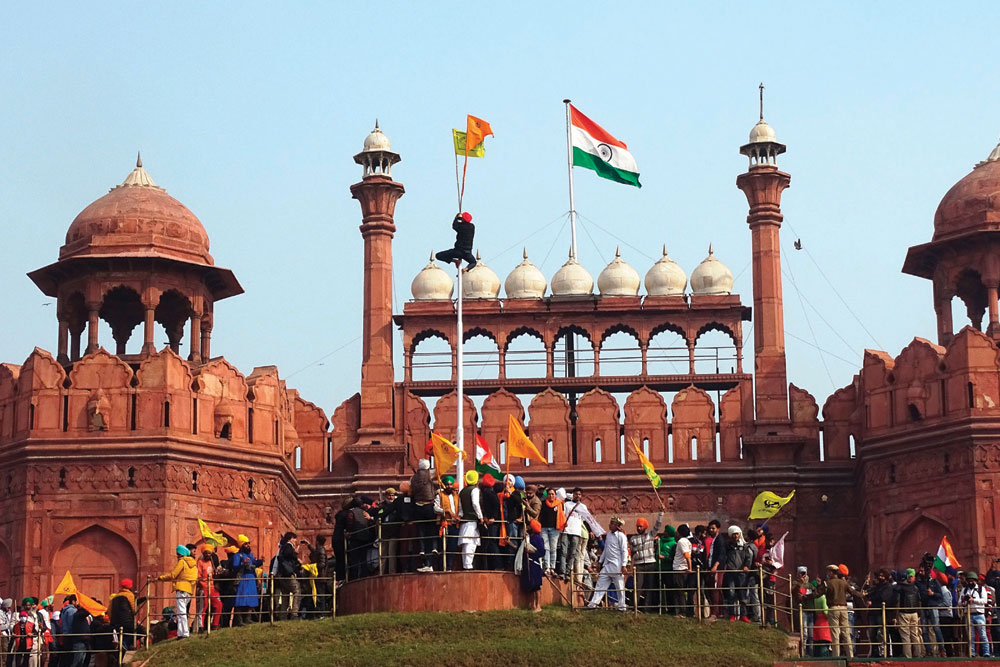 Protestors at the Red Fort in New Delhi on January 26 (Photo: AP)


THE CHAOTIC EVENTS of January 26th will always remain etched in the minds of Indians. Protestors from Punjab barged into the capital with thousands of tractors and managed to invade the Red Fort, the symbol of Indian nationhood. If that were not enough, they climbed on the ramparts of the fort and planted the Sikh flag that adorns the nishan sahib of countless gurdwaras across the country. In one swoop, they besmirched a religious symbol and the national one, a dubious record that will be hard to match, ever.

Beyond the outrage and the lawlessness seen in Delhi on January 26th lies a larger issue: What is the nature of the farmers’ protest that allegedly mutated into something much more malignant? Or was it really a case of a faction of farmers going rogue? Apologists have already given their verdict. In their analysis, this was either a conspiracy to derail a legitimate protest or, as many politicians have stated, this was the proverbial breaking of the dam as an obdurate Government refused to consider the demand to roll back the three agriculture reform laws. The conspiracy angle can be dismissed outright: thousands of persons and a large number of tractors breaking into a city and betraying a promise of good behaviour made to the police is not conspiracy, it is lawlessness. A conspiracy, if it is to be successful, has to be kept to a minimum number of persons; the number cannot be in thousands. The rollback demand is disingenuous: all political parties have favoured agriculture reforms at one time or another.

The analytical question is different and ought to be posed in terms of agitations seen in the last 12 to 13 months. The Shaheen Bagh agitation against the Citizenship Amendment Act (CAA) and the current protest against the three farm laws are peculiar in one respect. These agitations do not affect the material interests of their participants in any way. On the issue of Indian citizens who adhere to Islam, it has been repeatedly clarified by the Union Government that their status as citizens will not be affected. In the case of protesting farmers, assurances that there will be no change in the system of Minimum Support Price (MSP) for wheat and rice—the two crops cultivated by the protestors—have been given many times. This aspect of the two agitations—assurances being ignored—should alert one that something else is at work.

Since 2014, the Bharatiya Janata Party (BJP) has acquired a phalanx-like parliamentary majority two times in a row. This has been due to the party’s political strength and not some advantage that it has bestowed on itself from the fact of being in power, say, a change in some law that gives it an unfair electoral advantage. This has disrupted the established pattern of Indian politics seen in the previous three decades. It has resulted in weakening the system of spoils that Indian politics had been reduced to. All political parties, from large to small, national and regional, have come under electoral pressure. This twofold squeezing of traditional politics—economic spoils produced by fractured verdicts and the dotting of Parliament and state Assemblies with parties that served as veto points—required a different strategy to check BJP’s march.

Both agitations were designed to put BJP and its Government in a quandary, and they did. In Shaheen Bagh, the dilemma was simple: if it were to be suppressed by evicting the agitators from the protest site, there would have been violence and quite certainly, loss of life. The resulting uproar would have been politically unmanageable. The Government was saved by the coronavirus pandemic when the agitators reluctantly called off their protest. In the case of the farmers’ protest, the tactic and the goal were even more devious. The idea was simple: ‘invade’ the capital in such numbers that the Government is forced to react violently to control the situation. Once that happened, a series of cascading events could be rolled out that made it impossible for the Government to be run in any way. Paralysed from below, it would either hobble for the next four years or call it quits. Once upon a time, another prime minister faced a similar situation and made a serious, irreversible mistake that plunged India into an abyss.

That plan did not work. With nearly 400 of its members injured, Delhi Police behaved admirably. In the face of extreme provocation, this police force did not fire a single bullet that killed or injured a farmer. The one farmer, who did die, met his fate at his own hand: reckless driving of his tractor by barging it into a barricade leading to an accident. Had even a single farmer died at the hands of the police, the Narendra Modi Government would have landed into a first-class political problem. The global press and their domestic followers would have branded it an authoritarian Government. Scholars in the West would have ‘updated’ the ‘democracy scores’ for India and the country would have been described in terms usually reserved for rule by dictators.

All this is, however, deus ex machina and the cast of professional agitators involved in these protests should alert the Government that more difficult and trying circumstances cannot be ruled out. The problem for the Modi Government is that for all the appellations it is described by, it is in no position to time and pre-empt such attempts to put it in a spot. This is a classic mass agitation problem that democratic governments find hard to control. The right time to control such ‘movements’ is the initial stage when the number of agitators involved is small. But how small is small? Governments face protests every day in democracies. In virtually all cases, they are either handled at the local level or are ignored. In the latter case, they mostly dissipate once their cause disappears. But these are organic protests and not synthetic ones, designed to corner a government. In the farmers’ protest, the vast majority of them hail from a single province—Punjab—and even after all attempts, the geographic area of recruitment could not be extended beyond western Uttar Pradesh in the north and Rewari district to the south. What the organisers did manage to do was to gather a huge number of farmers from Punjab. The mistake of the Modi Government was to let them congregate in such large numbers on the borders of Delhi until it was too late. The sham negotiations these rich farmers then engaged in were ample proof that the ‘movement’ was about something else.

In January last year, when the Shaheen Bagh agitation was in full swing, it could not be imagined that 10 months later, a similar protest would grip India. After all, when the three farm reform ordinances were promulgated in June, there was not a squeak of protest. But then India is blessed with a number of shrewd, highly educated and enterprising agitators who want to acquire political power without undertaking the rigours of contesting a Lok Sabha seat. These professional agitators also claim to be followers of Mahatma Gandhi, the leader who perfected such tactics in his fight against the British Raj. But that is where the similarity ends: they have acquired Gandhi’s tactics but not his unflinching adherence of ends with means. If India is to know peace in the years ahead, the Modi Government has to find a way to tackle these elements.