He had a large following across the working and rural classes 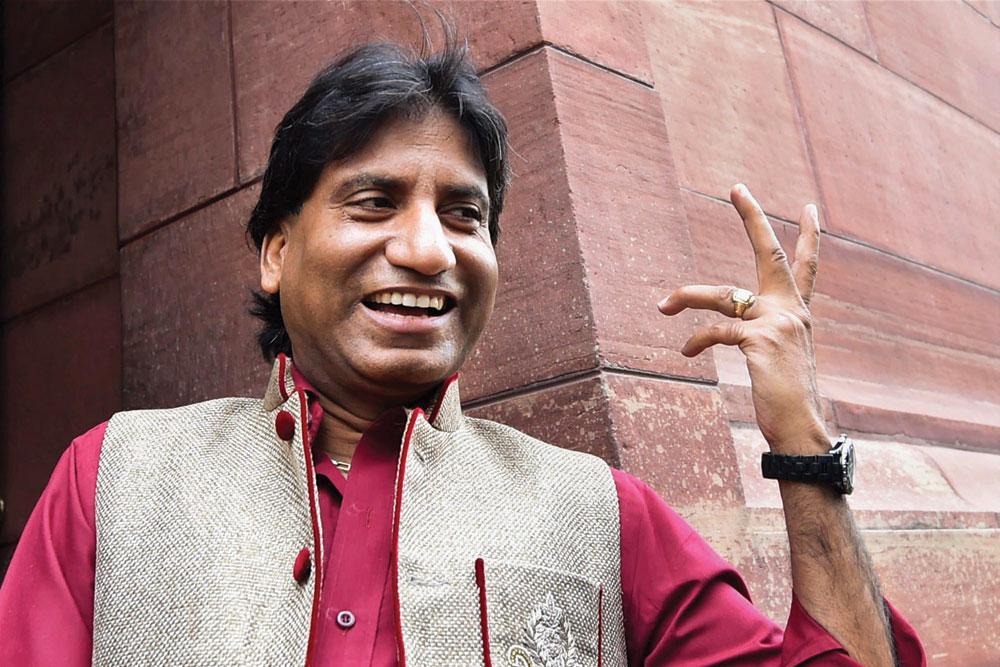 
IT WAS IN THE early 1990s that I went for a show of Raju Srivastava at an open-air auditorium in Bandra, Mumbai. Most of what remains in memory is the end of the joke, a mimicry act in which famous actors run on fuel, there is a crisis and they all come to replenish at the petrol pump. One of them creates a ruckus leading to the punchline that he runs on diesel while everyone else is on petrol. I remember laughing at it along with the audience, more from Srivastava’s mimicry than the joke itself. He was very popular as a comedian even then, but I would never see a show of his again though. This was because the urban English-speaking class wasn’t really his constituency. They would instead patronise a new generation of younger stand-up comedians in the Western mould. But Srivastava wasn’t becoming irrelevant. As mass media expanded, he was gathering a massive following among the Hindi-speaking work­ing and rural classes. About a month back while riding a taxi, suddenly the driver asked me whether it was true that Raju Srivastava had died. I quickly googled and said it was a rumour. I could feel the relief in his voice as he asked me, “Are you sure?”

Srivastava’s career began in the early 1980s, as with all entertainers enamoured with movies, who try to test the difficult waters of Bollywood. His father was a poet but Srivastava came without any connections to the film world. Bit roles in blockbusters, the grind of the small public event, the slow creation of a reputation—the struggle was stereotypical but he managed to break out of the throng and carve a space, even if limited at the beginning. He would never be a star in the mould as it was then. Comedy was a side character’s lot. But then, a few factors came together in post-liberalisation India to change it. There was the freeing of television channels from the government, and the resulting reach of this into crores of homes. Along with that, just as the trend peaked, came the advent of the reality show. In Srivastava’s case, it was a sub-genre within the comedy reality show. In fact, he lost in his first such major reality contest, coming second. But it didn’t matter because he was now a household name. Other shows followed and soon he got what Bollywood never gave, the kind of renown reserved for movie stars. It was the same trajectory that would lead Bhagwant Mann, another comedian, to the chief ministership of Punjab. When Srivastava died, Mann tweeted: “I worked a lot with him and also learnt much.”

Srivastava, too, tested the waters of politics but never really managed to make much of it. It had some curious twists. As when in 2014, he was nominated by Samajwadi Party (SP) to stand for a Lok Sabha seat from Kanpur, his hometown, but within days, he had jumped ship to join the Bharatiya Janata Party (BJP). He blamed it on leaders in SP trying to sabotage him. He was prescient in getting into the right party at the right time but didn’t enter the electoral fray. He remained with BJP, spoke the ideology on news channels, got appointed as chairman of the Film Development Council in Uttar Pradesh, but never quite got into the thick of it. Perhaps, that would have changed. He was only 58 at the time of his death, and that is youth in politics. His popularity in the Hindi heartland was undeniable because the language he spoke, the jokes he made, his political expressions were all in sync with an India that was evolving to a new nationalistic religious beat. It is a reason that he wasn’t in favour with younger liberal stand-up comedians whose audience were yuppies. One of them tweeted after Srivastava’s death that he spoke against newer forms of art because he “couldn’t understand it”. His death was unexpected and happened after a cardiac arrest while he was on the treadmill exercising. But what was worse was that he spent more than a month on a ventilator battling, leaving the irony behind of a comedian’s life ending in such a tragedy.