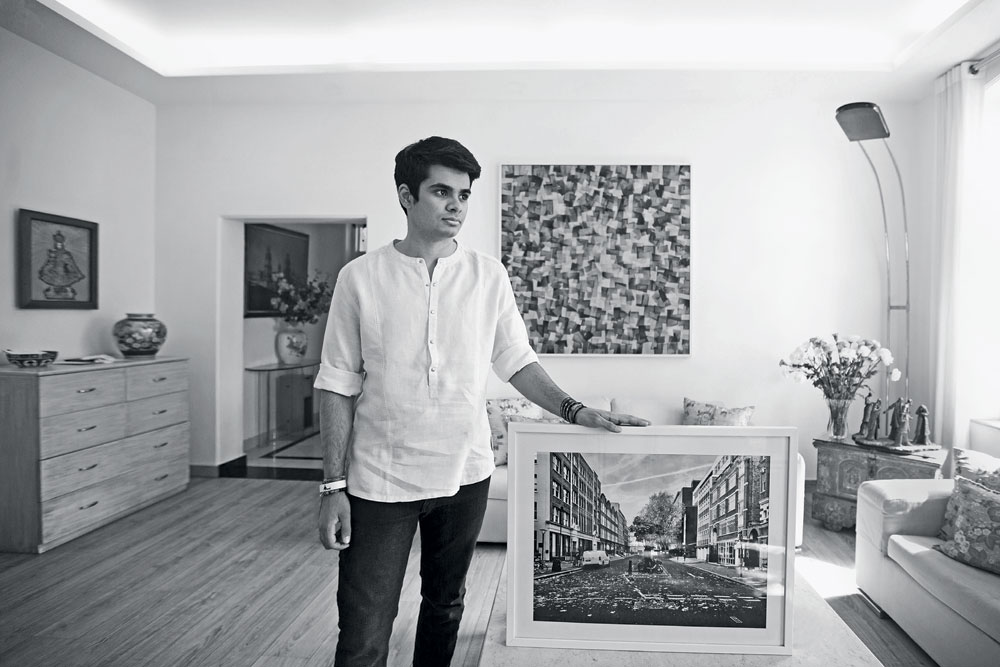 
THE EYE OF A tiger emerges balefully from foliage. A wide shot of a vividly blue sky overshadows a mountain range. A clear-cut silhouette of a figure is set against the backlight of the setting sun. The stark empty street in London brings to mind deserted public spaces in the lockdown. These powerful images, among many others, are part of Raihan Rajiv Vadra’s debut solo photography exhibition, Dark Perception: An Exposition of Light, Space & Time, at Delhi’s Bikaner House. These pictures, shot with a digital camera, with their diverse range of subjects, and taken over several years, broadly sum up all of Vadra’s experiments in photography.
The overarching theme of the exhibition, as alluded to in its title, is perception. In an interview with Open, Vadra, 20, points out that the main principle behind photography is perception, and the photographer’s aim is to direct the viewer to look at the object in a certain way. For Vadra, it is not enough to take the photograph, he also has to control the perception of it. He notes that he wanted to play on the nature of perception on a larger scale. “There is a lot of darkness in the photographs, with very minimal light. That is also why I have named it Dark Perception,” he explains. The exhibition, he says, reflects how our perception can also be shaped by the circumstances around us. “I feel that everything is controlled—particularly post Covid, and another element of this is how our perception is shaped by this control.”


Vadra’s photographic journey, so to speak, began in the jungles of Ranthambore and Corbett from the ages of eight to 10. This passion for photography in his formative years started, as Vadra recalls, when his mother, Priyanka Gandhi Vadra, had been working on her book, Ranthambhore: The Tiger’s Realm (2011), co-authored by Anjali and Jaisal Singh. They would spend upwards of 10 hours in the jungle, sitting in the jeep. “I would pick up from her how to use the camera and how to frame a shot.” He learnt on a small Sony video camera, then he switched to a tiny point-and-shoot camera. He reminisces, “I would always cut out the tail of the tiger as I was focusing on the face, and she would always say I needed to get the whole shot.”

I love being in the jungle. It’s the place I feel the most at peace and I go two or three times a year. It pushes my photography in a different way,” says Raihan Rajiv Vadra, photographer

Only some of his wildlife photographs are on display at the exhibition, but the few that are, are included as it was a vital stage in his journey as a photographer. “I love being in the jungle,” he says. “It’s the place I feel the most at peace and I make sure I go two or three times a year. It pushes my photography in a different way.” The photo Eye Spy, which was shot in October 2020, is not a typical tiger headshot. It catches the moment when just the tiger’s eye appears behind dense bushes. It conveys the sense of the tiger in its natural territory and has a menacing feel.

In contrast to the jungle terrain are the urban shots of London and Delhi, some aerial shots of landscapes, as well as images of people that play with light and shadow. This diverse range of subjects is proof of how Vadra, though still an avid wildlife photographer, has broadened his field since his teens. What started with an eight-year-old’s enjoyment of being in the jungle taking photos of tigers, over time led to the twin realisation that he could use the camera to tell stories, and also that the camera made it possible to bring a new angle to a familiar object, and turn any object or image into art. Explaining the background to one of the photographs, Sea Shell (2018), Vadra explains, “I was on the beach in Goa. Someone was picking up seashells, and I used the sun as a backlight, so it shows the person’s form, but you can’t tell who the person is.” He adds, “That’s why I like shooting with backlights for people, because you can only see the pure form of the figure.”

One photo of an elaborate carnivalesque mask, titled Jester, is especially intriguing. The photo had been taken at a shop in Venice in 2014. Vadra muses, “What I like about a city, is that you can walk for miles and certain objects will pop out at you. We were crossing a shop with a lot of masks, and there was a lot of light on the masks. This mask stood out.” It is evident that a little post-editing has been done on the photo, as the mask is the only object in colour. Vadra points out that masks have a lot more relevance in our lives now than they did seven years ago. Masks also have a lot to do with perception, as people wear different masks all the time in their daily lives. The mask in the photo may be a traditional mask, but it, like everything else, is linked back to Covid.

Photography has been something of a tradition in Vadra’s family. His grandfather Rajiv Gandhi was an enthusiastic photographer. Vadra says, “In recent years, I’ve been looking at his work, which is very good. I love his book, Rajiv’s World, curated by my grandmother. I really love the way he photographed people around him and how, in his own way he told stories of people and things around him with his camera.” He adds, “I look at his work, and I want to try my hand in film photography, and that possibly comes from his work.” It is Vadra’s mother, however, who not only was the earliest and main influence in his interest in photography but has always been the one who critiques his work. “She was the one to curate the initial pool of 50 photos for this exhibition, as she has a very good eye. She’s always been honest with my work, and pushes me to do better.”

The format of the exhibition itself has been carefully structured. The artist Peter Nagy has lent his curatorial expertise to it. “I’ve tried to recreate in that five-to-seven-minute period that you’re in the gallery what life is like post-Covid. The entire environment within the gallery is controlled. You only see the photographs for as long as we want you to see them. The lights come on and off when we want. The space is controlled. The amount of time the viewer gets to see the photo is also controlled. That’s why it has been termed as ‘light, space, and time’. He adds, “With all three components being controlled, it is for the viewer to decide whether control is a good or bad thing.”

When Vadra was 16, he injured his left eye playing cricket in Doon School, Dehrarun, losing vision in that eye, which he still hasn’t regained. Shooting and photography had till then been his main hobbies at school, but those pursuits stopped as both require focus, and it was too much of a strain for one eye. Between early 2017 and late 2019, he hardly took any photographs. This changed when he went to study in London. He explains, “I had initially picked up the camera again, as I wanted to make use of this skill set, so I started exploring London with my camera in a very different way.” His passion for photography was then renewed. In November 2019, he started his own commercial business venture, RRV Photography, carrying out his own photo shoots as well as commercial photo shoots. “The London photographs are important, because I can split my work between pre 2017 and post 2019. It’s easy to see the difference in the way I’ve taken the photographs. Once I picked up the camera again, I fell back in love with photography. I would wander London for hours with my camera and taking photos.” Several of the photos displayed in the exhibition are of the cityscapes in London. Photography has once again become a habit with him. “I again take photographs every single day, and I’ve gotten used to it.”

Vadra is studying politics at the School of Oriental and African Studies (SOAS) in London. He is currently in Delhi during the lockdown and is attending classes online. Asked whether his study of politics could turn into a career, he says, “I feel everyone should be interested in politics, and the world around them and how it works.” However, he is not at the moment thinking of a political career but he is certain that photography will always be a major part of his life. “I realised that only when it wasn’t a part of my life for two years.”