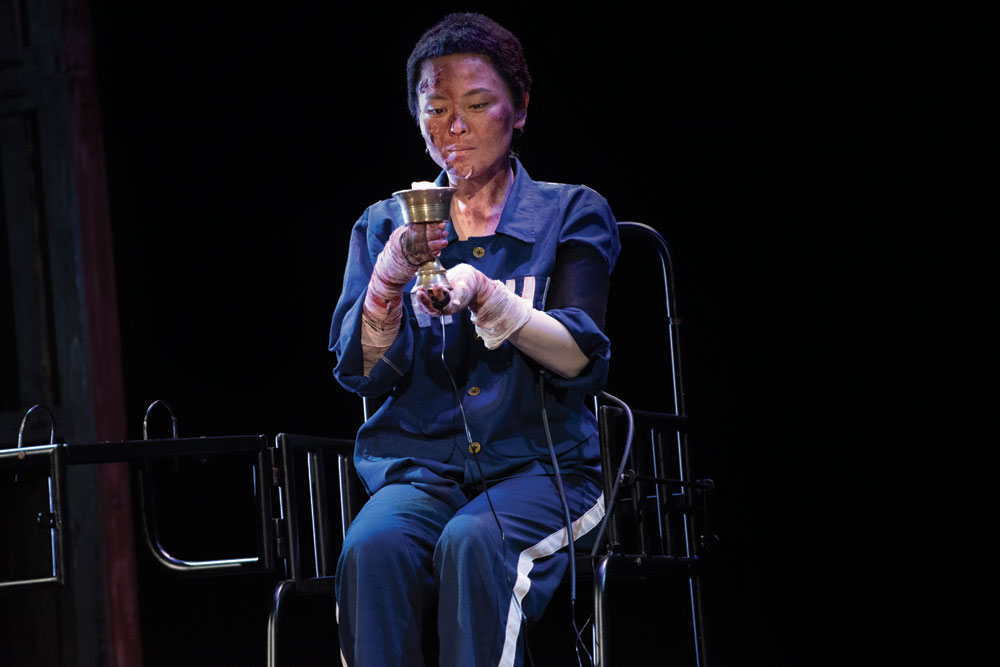 
A BUDDHIST NUN in eastern Tibet is enraged with Chinese occupation. She feels caught between the anger arising from the depths of her being, and a passionate commitment to non-violence. She has always been a rebel, so she hates feeling helpless. The communist agenda to wipe out all traces of her language, culture and religion push her to do something drastic, some­thing that will matter, and will make a difference. Self-immolation becomes her form of protest.

This young woman, named Deshar, is the protagonist of a Tibetan play titled Pah-Lak that was performed with English subtitles recently at this year’s Prithvi Theatre Festival in Mumbai. It was originally written by playwright Abhishek Majumdar in English, and translated into Tibetan by theatre direc­tor Lhakpa Tsering who also directed it along with German theatre director Harry Fuhrmann. Kalsang Dolma plays the role of Deshar.

Majumdar says, “I went to China and Tibet as a tourist. This gave me an oppor­tunity to do some clandestine research, at night, with Tibetans who live under Chinese occupation, after the China-appointed tourist guide would go away.” He interviewed many of them, and their testimonies made their way into the script of Pah-Lak. His travel to Tibet was partly supported by the Foundation for Universal Responsibility of His Holiness the Dalai Lama (FURHHDL).

FURHHDL was founded in 1990 with the Nobel peace prize money awarded to the 14th Dalai Lama in 1989. The organisation describes itself as “a not-for-profit, non-sectarian, non-denominational organisation” working on “creative initiatives and mutually sustaining collaborations that seek to foster an inclusive, just and non-violent world”.

Majumdar got a chance to meet the Dalai Lama in 2015. He recalls that the scheduled meeting was supposed to last for only 10 minutes but it eventu­ally went on for a whole hour. “We met after I attended his discourses on Madhyamika philosophy for three days. I asked him some tough questions about the Tibetan freedom struggle, his insistence on the middle path, his approach to the Tibetan guerrilla group Chushi Gangdruk, and criticism about him among young Tibetans,” says Majumdar, who eventually came away inspired. He recounts, “His Holiness the Dalai Lama told me: ‘Tibetans believe that I am god. You think that I am not. Please ask anything.’ His openness was incredibly endearing to see.”

Majumdar also spent time interact­ing with Tibetans living in exile in India. Tsering, who is the founding director of the theatre group Tibet Theatre, mentions that the English version of the play premiered in April 2019 at London’s Royal Court Theatre but without a Tibetan director or a Tibetan cast. He says, “Abhishek firmly believed that we Tibetans should tell our own story, so he asked me to suggest names of people who could translate the play into Tibetan. I could not find anyone, so I began translating it myself in March 2020.”

Tsering, who fled from Tibet to India in 1992, and studied political science at St Joseph’s College Bengaluru, used to be the president of the Regional Tibetan Youth Congress while in college. The similarities between Tsering and Deshar—the protagonist of the play Pah Lak—are too obvious to miss. In November 2006, when former General Secretary of the Chinese Communist Party Hu Jintao was visiting India, Tser­ing set himself on fire in front of the Taj Mahal Palace Mumbai to draw visibility to the Tibetan freedom struggle. He, like Deshar, survived the self-immolation attempt and sustained severe burns.

Tsering says, “Tibetans have been liv­ing in exile for 63 years. We have waited so long to tell our story. It was a very emotional experience to perform at the Prithvi Theatre, and get all the love and support from people in Mumbai.” The play has already been staged in McLeod Ganj, Delhi, Dehradun, to name a few places. It will tour Germany and Switzerland next year.

Tsering adds, “This play would have been impossible without our collabora­tion with the Tibetan Institute of Per­forming Arts (TIPA), which was set up by His Holiness the Dalai Lama in 1959 soon after he sought asylum in India. He knew the importance of preserving our arts and culture in exile, and the power of storytelling in advocating for our freedom struggle.”

“Tibetans have been living in exile for 63 years. We have waited so long to tell our story. It was a very emotional experience to perform at the Prithvi Theatre, and get all the love and support from people in Mumbai,” says Lhakpa Tsering, director and actor

The show opened with the Ngonpa dance that is an important ritual con­nected with Tibetan opera. It is meant to purify the stage. “It is a good luck sign for the performers, and it also helps to prepare the audience for what they are going to watch,” says Tsering. The play also incorporated chanting of the mantra Om Mani Padme Hum, associ­ated with Avalokiteshvara or Chenrezig, the bodhisattva of compassion and the patron deity of Tibet. Photographs of Tibetans who have self-immolated to protest Chinese oppression were projected during the play. It also in­cluded a recitation of the ‘Tseme Yonten’, or ‘The Prayer of the Words of Truth’, composed by the Dalai Lama after being forced into exile in 1959. The Tibetan Buddhist leader has not seen the play but has read the script.

Majumdar is curious about how religions approach questions of origin and the afterlife. Pah-Lak is part of an ongoing intellectual journey. His earlier plays Tathagat and Muktidham have also explored Buddhism but in a different way. “Pah-Lak explores Tibetan Bud­dhism, which is at the cusp of Mahaya­na and Vajrayana. Practitioners engage in meditation, prayer, chanting and worship,” he says. “On the other hand, Tathagat focuses on an Ambedkarite view of Buddhism aligned with social justice. It offers a critique of Vedic rituals. Muktidham looks at how sanatanis strug­gle between violent and non-violent means within a Buddhist kingdom where they are minorities.”

Deshar in Pah-Lak also reminds one of Mehtaab, a character from another play written by Majumdar—The Afterlife of Birds. It was informed by interviews with parents of young Muslim boys in Delhi’s Jamia Nagar—who were accused of involvement in terror attacks—and testimonies of women who were associ­ated with the movement for a Tamil homeland led by the Liberation Tigers of Tamil Eelam (LTTE) before they sought asylum in London.

While both Deshar and Mehtaab want to end their lives, Majumdar points to a fundamental difference. He says, “Mehtaab from The Afterlife of Birds is a suicide bomber. Deshar from Pah-Lak is a nun who chooses self-immolation as a form of protest against oppression. Mehtaab’s success depends on hurting other people. Deshar, on the other hand, wants to hurt no human, bird, animal or any form of life. She hurts only herself, and out of compassion.”

Pah-Lak wears its politics on its sleeve. Before the audience entered the Prithvi Theatre, they were given printed pamphlets with information about the cast and crew, and the political background to the play. These pam­phlets explained how China runs “re-educa­tion” programmes to get Tibetan monks and nuns to withdraw their loyalty to the Dalai Lama and to proclaim their un­stinting allegiance to the Chinese govern­ment. The narrative of the play showed how monasteries and nunneries in Tibet are threatened.

“His Holiness the Dalai Lama told me: ‘Tibetans believe that I am god. You think that I am not. Please ask anything.’ His openness was incredibly endearing to see,” says Abhishek Majumdar, director

Majumdar has ensured that there are shades of grey in the play. According to the Bud­dhist worldview, the Chinese too are worthy of compassion, as they too are sentient beings who long to be free of suffering. Through the characters of Deng and Ling, who are Chinese police officers, the play invites the audience to make a distinction between the Chinese state and the Chinese people—who are not only officers but also mothers and fathers. The word ‘Pah-Lak’ means ‘father’ in the Tibetan language. The play attempts to show how Deshar’s father and officer Deng—who mourns for the loss of his daughter—are united in their grief. The play also shows how victims can become perpetrators when frustra­tion is intolerable.

Tsering, who directed the play, is also cast as officer Deng. He says, “It was very challenging for me, a Tibetan person, to play a Chinese police officer. Many Tibetans are not satisfied with how the character has been written because we have shown that the Chinese people are human beings; they too have emotions. I had to put myself in their shoes.”

Fuhrmann, who co-directed the play with Tsering, has been conducting act­ing workshops at TIPA since 2015. Most of the actors in Pah-Lak were trained there. “I teach at acting schools around the world, so I wanted to figure out what I could offer the Tibetan community in exile. German Aid for Tibetans has been kindly supporting my visits to Mcleod Ganj to work with Tibetan actors. I have many friends there now. It has be­come a second home.” He met ex-political prisoners from Tibet to know about their experiences while working on the play. Scenogra­phers Timo Dentler and Okarina Peter helped him realise his vision on stage.

Majumdar, who heads the theatre programme at New York University’s Abu Dhabi cam­pus, and serves as Visiting Associate Professor of Practice of Theatre, is also pursuing the study of Islam for an­other theatre project called Baatin that revolves around Quranic exegesis.

Majumdar identifies as an atheist but he is interested in the study of religion as a “philosophical proposition, as a system of ethics, as an institution that tells people what to wear and whom to love and what to eat”. Pah-Lak is a power­ful example of how religion can inform political struggles.