World on the edge as Putin orders nuclear preparedness 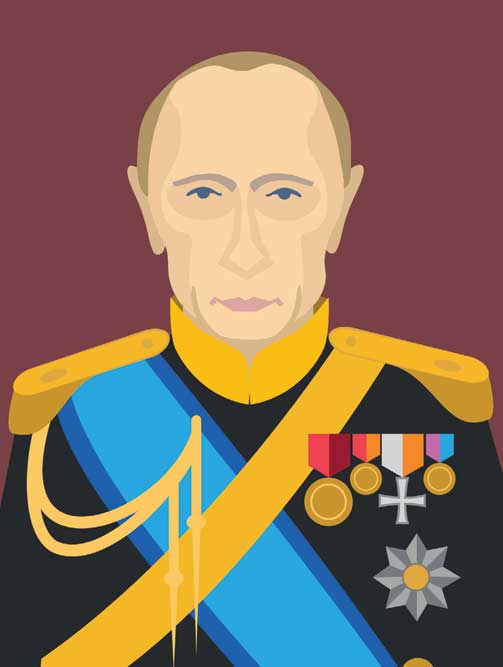 A shudder went down the spine of the world when the N-word was heard across news channels on the third day of the Russian attack on Ukraine. It sounded as though President Putin had ordered his nuclear force to be in full preparedness to act, but it was soon clarified that it was only an order to the nuclear force to be ready to defend the country in the event of an attack. That brought the temperature down and the world heaved a collective sigh of relief. But it was ominous that he made the world

aware of his nuclear capability at a time when Putin confronted unexpectedly stiff resistance from Ukraine and tough sanctions from the US and the European Union. The nuclear button is susceptible to accidental use by sick, mad, or frustrated rulers. Mercifully, the button in their hands will pass through several levels of scrutiny in seconds before the weapons are launched.

Many years ago, I was at a summit meeting between Prime Minister Morarji Desai and President Leonid Brezhnev in the Kremlin. While a visibly unstable and forgetful Brezhnev was reading his address, I was suddenly gripped by the fear of an accidental click of the nuclear button by the Soviet leader. I shared my anxiety with the then foreign secretary by passing a slip to him. He quickly replied saying, “Don’t worry, at this stage, it must be a fake button on his table!” Putin is too young and too smart to be deceived with fake buttons, but his state of mind and determination may lead to a catastrophe.

It was not long ago that Putin had played a video of the trajectories of Russian missiles raining havoc on major US cities to an audience to demonstrate that his nuclear arsenal was sophisticated, its range was long and its lethality was absolute. Russia keeps several of its missiles targeted and ready to launch against its enemies. Moreover, Putin had stated more than once that he would not hesitate to use nuclear weapons if anyone posed a threat to his country. He does not subscribe to the theory of non-first use of nuclear weapons like India and China have. Russia is more like Pakistan which claims that it has tactical nuclear weapons, which can be used for the multiplication of forces at its command. Countries that have a sense of inferiority about their conventional capabilities are the ones that threaten to use nuclear weapons. A threat assessment is crucial, but it may happen also because of fear, ambition, or sheer madness.

Countries like North Korea and Pakistan have developed nuclear weapons to rectify the imbalance in conventional capabilities compared to powerful nations. Israel maintains a nuclear option to meet the threat of chemical weapons. Since the weapons are made abroad without any fundamental research in their own countries, their safety standards are a matter of concern for the world. Russian weapons are not known for accuracy or foolproof targeting. Concerns of safety and accidental use exist about Russian nuclear system also.

I recall that the US was gravely concerned about the command and control systems of India when we declared ourselves a nuclear weapon state in 1998. After the initial anger and imposition of sanctions, the US gave us a series of briefings on command and control systems. That was the first time that some of us entered the Pentagon. But our scientists and strategists found the briefings elementary. They assured us that our systems were far ahead in the matter of safety and inadvertent use.

Needless to say, the Russian announcement of nuclear alert, whether for offensive or defensive purposes, will have its adversaries take countermeasures as they consider necessary. They may have serviced them thoroughly, made them even more lethal, and targeted them more accurately. In other words, the stage is set for a nuclear war, even if it does not take place.

The personality of President Putin is also a matter of concern for the world. Even his friends hold him in awe as a former KGB agent and a confirmed Russian nationalist. His recent statement indicated that he sees himself as the saviour of Russia. He is known to be ruthless in pursuit of his goals and uncompromising. His mood today may also be one of frustration and even despair, and his characteristic paranoia may have worsened. Foreign Minister Sergei Lavrov is a seasoned strategist and diplomat, but he is known to be more his master’s voice rather than his conscience-keeper. No global leader appears to be available for him to get the right advice at the right moment. Nuclear weapons in his hands may well be doubly dangerous.

Even more bizarre is the decision taken by Belarus to declare itself a nuclear weapons state after a national referendum. Do they expect to get back the weapons they gave to Russia? Or do they have the capacity to make their own weapons? But the Belarus president is known for unconventional thoughts and actions.

The talk of nuclear weapons at this crucial time is extremely dangerous and may lead to unforeseen consequences. It has already moved the hands of the Doomsday Clock closer to the moment of a global nuclear catastrophe.