A well-deserved global award after a lifetime of composing music 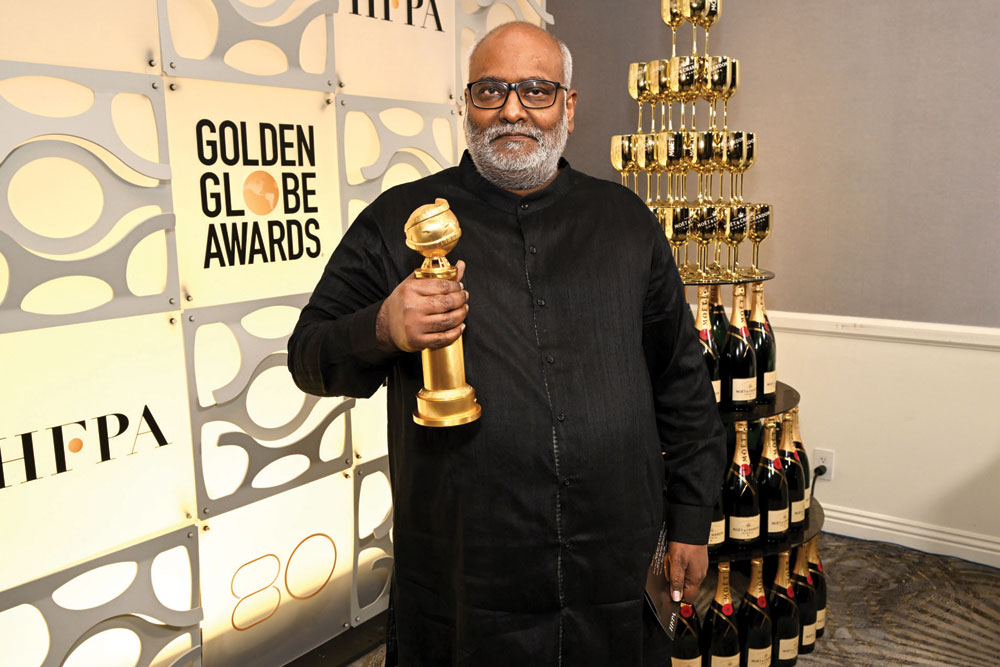 
A FOLK BEAT WITH classical ragas and Western instrumentation, picturised on two stars engaged in a robust dance-off against an Eng­lishman, while an Englishwoman cheers them on. Much like the cricket match in Lagaan in 2001, RRR makes the two heroes, dressed like English­men, tap dance like Gene Kelly with an energy and enthusiasm all their own. It is an iconic, anti-imperialist moment in world cinema and it is little wonder that ‘Naatu Naatu’ conquered the hearts of the Hollywood Foreign Press Association and won a Golden Globe for Best Original Song.

No surprise also that the music director behind the song, the low key MM Keeravani had a long list of people to thank for the song, among them the choreographer Prem Rakshit and lyricist Chandrabose.

Keeravani knows exactly how important the words and images are for a song. His breakout song is from Kshana Kshanam, (1991), directed by Ram Gopal Varma, where ‘Jaamu Raathiri‘ recreated the sounds of a forest at nighttime and featured a young Venkatesh and Sridevi. With its haunting sound, ‘Jaamu Raathiri’ takes you right into a forest with a coy Sridevi being serenaded by a confident Venkatesh. ‘Telusa Manasa’ from Criminal (1994), was sung sensuously by SP Balasubrahmanyam and picturised on a honeymooning couple Nagarjuna and Manisha Koirala. ‘Tum Mile Dil Khile,’ the Hindi version sung by Kumar Sanu, made him popular in Mumbai as well. ‘Jaadu hai Nasha hai,’ sung by Shreya Ghoshal, for Amit Saxena’s Jism, (2003), featuring a seductive Bipasha Basu and a mostly open-mouthed John Abraham, was equally well received.

Keeravani, who calls himself MM Kreem in Mumbai cinema and Maragathamani in Tamil and Mayalayam cinema, knows a song is a collaborative exercise. For ‘Naatu Naatu’says Kasturi Muralikrishna, writer and editor of Sanchika, a Telugu web magazine, it took 19 months for Chandrabose to come up with the perfect lyrics. Indeed, ‘dance as if you’ve eaten green chillies/dance like a sharp knife’, couldn’t be a more accurate description of the way Junior NTR and Ram Charan move in the song. Keeravani was tough on himself, composing 30 tunes before settling on ‘Naatu Naatu’.

Keeravani is deeply spiritual. He has lived like a sanyasi for a year to avoid a premature death, which was predicted, gives large part of his earnings to charity, and is fiercely loyal to his family. SS Rajamouli is a cousin and works only with Keeravani. The Golden Globe is a result not only of his hard work over the years but also his consistency and resilience. As Muralikrishna says: “He doesn’t have Illyaraja’s arrogant creativity, Devi Sri Prasad’s showmanship or AR Rahman’s technological wizardry, but he is humble, creates tunes till the producer is satisfied, and is amenable to suggestions from singers too. His songs are not showy but enduring and melodious.” He is a fan of music director RD Burman and novelist Stephen King.

Tanuja Chandra who worked with him in her movie Sur says he has composed beautiful song upon beautiful song for decades. “I’m so glad the global spotlight is on him now and will lead people to the sublime music he has created. I remember with such affection that the day the album of Sur, my 2002 movie, released, the music company called and told us that the songs were loved. He’s a magnificent artist and a wonderful human being. I’m thrilled for him.”

Indeed praise for the man is almost as universal as plaudits for the musician. He is described by friends as quiet and reticent in formal company but quite talkative among friends and family. He’s often given to breaking into song as well. He doesn’t drink, lives a quiet life, and likes to sidestep controversy. A trained violinist, he loves the harmonium.

In many ways, The Golden Globes bestowed belated recognition to many stars who have diligently worked in their own lanes, whether it was American comedic genius Jennifer Coolidge, 61, or Malaysian action star Michelle Yeoh, 60. The Best Original Song award will give wings to Keeravani, 61, while proving that staying close to your roots and being authentic to your art can pay off in the long run. One just needs to stay the course.