Mamata to the Fore

After beating back Modi-Shah, will she be ready to lead the opposition nationally? 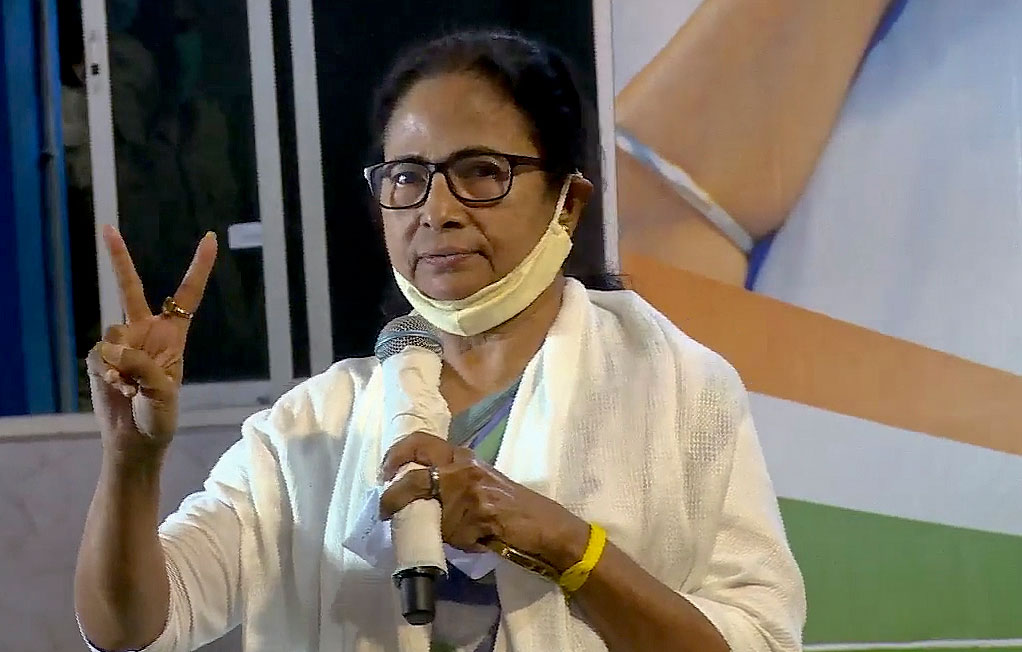 Mamata Banerjee addressing after her win in West Bengal, May 2, 2021


After the promise of a neck-and-neck photo finish, soon after West Bengal woke up on May 2nd, it found Mamata Banerjee and her Trinamool Congress (TMC) well past the 148 mark needed for majority in the 294-seat Assembly. While most bookmakers would run for cover, the incumbent chief minister, now set to continue in office for another term, may actually have other things on her mind.

Having beaten back BJP and Narendra Modi-Amit Shah with many more seats than predicted by the most hopeful prospects for TMC, Banerjee is likely to eye the national stage. The governing TMC, which battled serious anti-incumbency in many parts of the state owing to the allegations of widespread corruption and political violence, has won against an electoral machinery much better organised than its own, with its national stars campaigning in the state for months in what had been turned into a very high stakes battle by BJP.

The embattled and patchwork opposition nationally had looked at Mamata Banerjee as its last hope, having been leaderless and rudderless for long, not least because Congress’ Rahul Gandhi had never seemed either eager to lead it. That left Banerjee, with the credentials of a mammoth majority in perhaps the most important state election between the 2019 and 2024 General Elections. The message of the Bengal results seems to be: if any leader in the opposition is capable of holding her ground, it is her, owning a narrative that hasn’t been tattered election after election.

However, Banerjee’s emergence as the last opposition leader may be bad news for traditional political establishments and their legatees. A few weeks ago, in the second phase of the eight-phase Assembly election and on the eve of her own election in the Nandigram constituency, Banerjee had written to Congress president Sonia Gandhi and NCP leader Sharad Pawar, the two leaders whom she knows best, to form a rainbow front to defeat BJP.


It’s not known how Sonia Gandhi felt about the letter, but there was no response to it from her party. Rahul Gandhi appeared not to spare Mamata Banerjee at all in his Bengal campaign speeches. In the fifth phase, at Goalpokhar, speaking in support of Congress candidate Deepa Dasmunshi, he had gone back in time to warn his audience about Banerjee’s past alliances with BJP. He also encouraged the Bengal unit of his party to overcome its initial hesitation in accepting into the Congress-CPM coalition the Indian Secular Front, led by Abbas Siddiqui, am Islamic cleric. TMC had feared losing Muslim votes in south Bengal as a result of Siddiqui’s entry. Clearly, those fears were unfounded.

Pawar was open to the idea of tying up with TMC and wanted to address some rallies in Bengal. But he was snubbed, reportedly with Rahul’s support, by former state Congress president Pradip Bhattacharya. On the other hand, CPM’s enmity with Banerjee runs so deep that it was displeased to see its cadre quit the flag and turn saffron. Detailed analysis of the results could end up showing that BJP’s seats and votes, at the end of the day, owe largely to the old Left vote that is now the saffron party’s to own.

A thousand miles up north from Kerala where the state unit of CPM will celebrate, opposition leaders might remain dejected, still too wary of accepting an ‘outsider’ like Banerjee as its national leader. For Bahujan Samaj Party chief Mayawati, it is so precious to guard her constituency, little does it matter that she has only 10 seats in Lok Sabha. For Akhilesh Yadav of the Samajwadi Party, with only five seats, who had such trouble working with Mayawati, how much more difficult would it be to work with, and accept the leaderrship of, Didi?