Why security forces may find it hard to stop minority killings 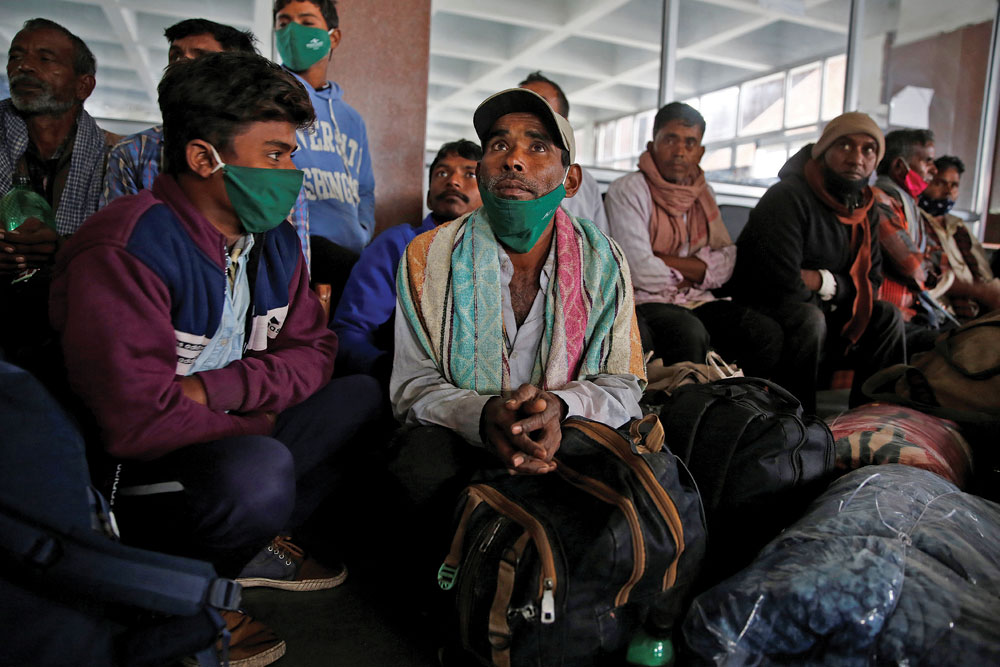 Migrant workers in Kashmir waiting for trains to take them back to their home states, October 18 (Photo: Reuters)


BY THE TIME two more migrant labourers were gunned down in Kashmir by unidentified terrorists on October 17th, it had become clear that such killings in ones and twos marked a change in how insurgency would play out in the Valley in the coming months. In terms of shock to the security situation in Kashmir, these killings offer little tremor as opposed to a big jolt like the 2019 Pulwama suicide attack. But these killings, selective and random at the same time, have managed to create an impression that not everything is in control in the Valley.

“New Delhi had been in too much hurry to show that absolute normalcy has returned to Kashmir,” says a senior police officer based in Kashmir. “A flurry of flag hoisting to plans of holding public events with too much publicity around them have boomeranged.”

This losing control of sorts was reflected immediately after the most recent killings of two Bihari labourers. The police high command issued a directive to its district-level leadership to pick up all migrant labourers from their dwellings, from north to south, and put them up in safe security camps. This directive was abandoned soon afterwards, but by that time the police and the Central Reserve Police Force (CRPF) had already put it into action. Hundreds of labourers were, for example, picked up from South Kashmir’s Pulwama district and made to stay in police and CRPF camps. It is not clear why, but within an hour or so of their shifting, some of them living in towns were sent back to their accommodations. The rest, living in villages, were asked to stay put. But, by the same evening, hundreds of migrants had begun leaving Kashmir, taking whatever mode of transport they could get.

The same confusion and lack of decision-making could be seen in the case of the Kashmiri Pandit government employees, living in transit camps and rented accommodations in several pockets across the Valley. Days later, at least one official from the Education Department issued a directive, asking minority community teachers to return to duty. But after the latest killings, they were asked to take online classes.

The lack of clarity is not confined to decisions on the future of minority Pandits and non-locals. The biggest challenge security forces now face in Kashmir is that the identity of those committing these killings is difficult to ascertain. “There clearly is a change in the modus operandi of terrorists,” says a senior official of the National Investigation Agency (NIA). “There is an attempt to portray that the insurgency in Kashmir is indigenous and that these killings are a direct result of the anger generated after the Centre’s decision to abrogate Article 370.”


Earlier, in most cases, the arc of a young man becoming a terrorist would be clear. His brush with violence began as someone pelting stones at security forces, and then turning into one indulging in chronic stone-pelting. From that stage he would come to the notice of a terrorist overground worker (OGW), soon afterwards becoming one himself. And then, one day, his photograph with a weapon would be splashed across social media, announcing his entry to a terrorist organisation. “But these recent killings have been done by those who have so far managed to stay below the police radar, so there are no photos, no grand announcements and hence no surveillance,” says the NIA official.

Though Jammu & Kashmir Police were quick to kill some terrorists recently, claiming they were responsible for a few recent killings, sources point out that most of it is conjecture right now and a face-saving attempt. “Remember, after the Pulwama attack as well, some of the small players killed in encounters were dubbed as masterminds. But later, the masterminds turned out to be a whole bunch of other people,” one of them says. That is one reason why the investigation into some of these killings has now been handed over to NIA.

Police sources say these killings have been done by TRF or the resistance front, whose Kashmiri commander Sajjad Gul is in Pakistan. TRF is an outfit created by ISI after the 2019 abrogation of Article 370

In the past couple of weeks, several hitherto unknown terrorist organisations have sprung up, claiming responsibility for some of the killings. The killings of two Bihari migrant labourers in South Kashmir’s Kulgam district, for example, have been claimed by two organisations—nobody had heard their names before. One of them, named the United Liberation Front Jammu and Kashmir, warned non-local “stooges” to leave “our land” or get ready for “dire consequences”. The other, Kashmir Freedom Fighters, claiming responsibility for the same killings, said that “non-settlers” were involved in “many immoral activities like drug trafficking and were in touch with Indian (security) agencies”.

“The aim is to create confusion among security forces,” says another senior police officer. With the creation of such small organisations, the insurgency in Kashmir was made to look like the one in the Northeast’s Manipur where dozens of small organisations have existed in the past, indulging in targeted killings and extortion, etcetera. “But the only difference is that in Kashmir, it is just a ruse. The fact is that all these terrorists have at their top the same old handler in Pakistan, namely ISI,” he says.

Police sources point out that these killings have been done by TRF or The Resistance Front, whose Kashmiri commander Sajjad Gul is in Pakistan. TRF is essentially an outfit created by the Inter-Services Intelligence (ISI) after the 2019 abrogation of Article 370. NIA has conducted dozens of raids in Kashmir recently, including at Sajjad Gul’s house. Gul, NIA sources say, is the man behind the blog ‘Kashmir Fight’, which has in the past named several people as “collaborators” of the Indian state. This includes journalist Shujaat Bukhari, who was killed outside his office in 2018.

Around the time of the latest killings, the blog issued a document titled ‘Kashmir Resistance…Strategies to be adopted’. It is a directive on who all could be targeted in Kashmir. It asks, for instance, that non-locals who have been given a new domicile certificate or those who want to “establish any sort of entrepreneurship with any local person” should be targeted.

The frustration with sustained NIA raids is also reflected in the document. It speaks of targeting local Kashmiris found to be assisting NIA officials. It also warns that the families of senior police officers working in Kashmir could be harmed.

“Part of the tactics is that we are no longer hearing from old terrorist organisations like the Jaish, Lashkar, or even the Hizbul Mujahideen that has most Kashmiris as recruits,” says the NIA official. That is why, he says, TRF has also warned house owners and shopkeepers who have CCTV cameras installed outside their premises. “They do not want to leave any trace behind of their men responsible for these killings,” he says. Some killings of cops have been in the past caught on these cameras, helping the police identify the killers.

SENIOR OFFICERS IN Kashmir’s security grid say that the next few months are going to be crucial in determining who will have an upper hand between the Indian state and the terrorist groups. A senior CRPF official points out that, to win this battle, the counter-insurgency blueprint in Kashmir will have to be tweaked. “There is just too much focus on operations to kill terrorists in encounters. While operations are important, what is more crucial is the investigation of OGW networks and how young Kashmiris get lured into the jihadist trap,” he says. Of late, sources reveal, there has also been an increase in friction between various security agencies, especially the Kashmir police and CRPF. “While inter-agency rivalry is nothing new in any theatre of insurgency, beyond a point it creates a security vacuum which terrorists take advantage of,” he says. Sources in the CRPF claimed that recently there was some disagreement on putting up random nakas in Srinagar city to send a message to terrorist sympathisers that they did not have unhindered access to the city. CRPF put up its own nakas, though Kashmir’s Inspector-General of Police, Vijay Kumar, denied this saying that all the surprise checks in the city were conducted under his command.
There are indications that in the coming days more civilians, like labourers or political workers, may be targeted. “Beyond a point it is not possible to give security to every possible target,” says a police officer based in Srinagar.

On October 20th, the police killed a Lashkar commander, Adil Ahmed Wani, in South Kashmir’s Shopian. The police alleged he was involved in the killing of one migrant worker in Pulwama earlier. In Srinagar, two terrorists were killed earlier on October 15th. The police claimed they had joined the terrorist ranks  recently and were responsible for the killings in the city. “While that may be true, it is unlikely that with their killings, civilians will stop becoming targets in Srinagar. There will be more terrorists not known to the police and they will indulge in more killings,” says the NIA official.