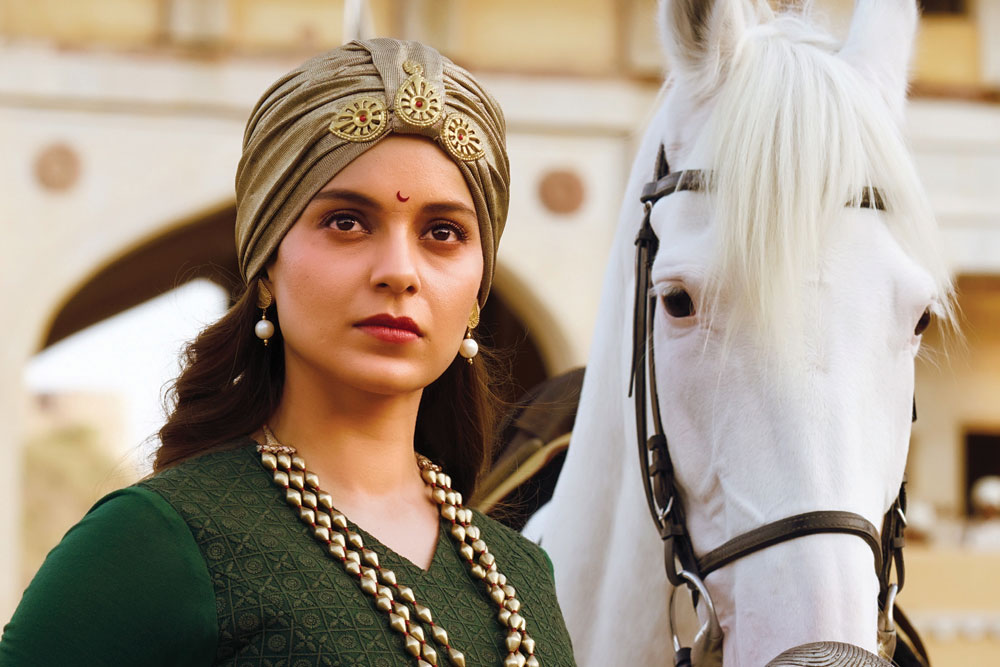 
Kangana Ranaut’s beautifully designed Khar home is filled up with framed images of two people. One is of every woman’s favourite feminist artist Frida Kahlo—she of the unibrow, uninhibited sexuality, perennial physical pain and prodigious talent. The other is of her self-chosen spiritual guru, Swami Vivekananda, whose teachings dot her walls. When Kangana ran away from the four-month-long modelling course Elite put her through in Delhi in 2005, she could not have imagined such material success. A home in one of the best parts of suburban Mumbai, an equally pretty office (now in ruins thanks to a bunch of uncivic officials), a resort in Manali overlooking orchards and first dibs on a biopic on any iconic woman, from Rani of Jhansi, Laxmibai to Jayalalithaa.

Despite enormous odds, Kangana has conquered the heights of the film industry, on her own terms, since she burst on to the scene in 2006, all skinny arms, wild hair and untrammelled talent. Along the way she has overcome broken relationships—with a character actor, as she calls him, who abused her physically and psychologically; with a star son who failed to take off and then went public about her prowess with black magic; with a married superstar who abruptly dropped her from his life and the publicity of two films he had signed with her when she showed signs of getting serious about their relationship; and with a separated superstar who refused to even acknowledge their affair. She has avoided item songs which objectify women. She sticks to her principles such as about not endorsing fairness products. And as she tweeted to Jaya Bachchan, she has not accepted the fate meted out to most women in the industry: two minutes in a film, with an item song and a romantic scene, in exchange for sleeping with the hero. Any sleeping that has been done is entirely voluntary and often cheerfully.

As if that was not extraordinary enough, Kangana has admitted she had a drug habit, which she says she has overcome. She has talked about the extensive work she has done on herself: spiritual practice, English lessons which she continues to take or styling which is tasteful yet quirky. She has laid bare much of her life for all to see, and instead of praise and adulation, she has usually faced a stone wall of rejection, whether it is from female colleagues such as Deepika Padukone and Alia Bhatt whose work she has publicly admired or from directors such as Karan Johar and even good friend Anurag Kashyap who have mocked her.


The industry’s code of silence usually means that couples don’t acknowledge any intimacy unless they marry; former lovers behave like best friends; married male stars routinely expect the young (and younger) women they are starring with to go gratefully to bed with them. As for directors who routinely extract sexual favours from vulnerable young women (and men) for the promise of stardom, there is no lack of them either. Once you’re given a privileged pass into the industry, you’re supposed to turn a blind eye to every malpractice, laugh but not too loudly and move on—to the next film, the next endorsement, the next boyfriend.

Despite enormous odds, Kangana Ranaut has conquered the heights of Bollywood on her own terms. She has avoided item songs. She does not endorse fairness products

Kangana has not followed that path. When she tweets about fancy nepotistic children who show romantic dreams to vulnerable outsiders and then publicly dump them, referencing Sushant Singh Rajput and Sara Ali Khan, she may as well be talking about herself. For someone so conscious of the film hierarchy, she knows A-list actresses are required, almost by custom, to have A-list boyfriends, unions which then create self-perpetuating A-list dynasties. She also knows that unless she celebrates her success, no one else will: so when Manikarnika makes Rs 90 crore at the box office or Tanu Weds Manu Returns grosses Rs 148 crore, she has to blow her own trumpet.

In the process though, perhaps Kangana has become the very thing she hates most. Stealing credit from directors is something male actors do routinely. Not billing writers fairly is also not unusual. Not acknowledging the work of others on the films that succeeded is again particularly true of narcissists. Walking out of movies where there is room for only one ego—that belonging to the male actor—is something other actresses have done as well; Kangana doesn’t gain points for that. As for not attending award shows because they are bought and sold, it’s a path trodden by no less than Aamir Khan. But when Kangana attacks other actors for their choices, of silence or speaking up, or categorises them, she is doing them and herself a disservice. Kangana is not the first woman to have made female-centric movies. She is not the first feminist in the industry. She is also not the first outsider to have come so far. Contrary to what she would like us to believe, not everyone has had a sugar daddy, a powerful boyfriend or a storied family to descend from. Many women have come to the industry from nowhere and made their place in the hearts and minds of the nation.

But anger is a coruscating emotion. It can destroy years of control over one’s emotions. It has, of late, transformed Kangana, propelled her to see her own narrative in that of every person or community that has suffered, whether it is Sushant Singh Rajput or Kashmiri Pandits in exile. Call it too much empathy or excessive opportunism, but it has made even those who once admired her question her now. As filmmaker and writer Vinta Nanda says: “There’s a tree that bears fruit. Someone wants to destroy it. He gives a saw to a girl called Kangana who is sitting on the tree and tells her to do as told. Kangana cuts the branch of the tree on which she is sitting. She falls off. The tree is hurt but it picks its wounds, continues to grow and bear fruit. Kangana is embarrassed for being so foolish. That’s how I view this whole thing vis-à-vis Kangana and Bollywood and vis-à-vis Kangana and Mumbai.”

Kangana’s campaign is unlikely to help her consolidate power. Bollywood worships commercial success. Perhaps she needs to pause telling her own story and resume telling the stories of others

Nanda says she specially saw all her movies, even stood by her and wrote against Johar’s behavior, but now believes Kangana’s like a speeding car abandoned by its driver. She’s hurtling ahead without anybody at the steering wheel. “We have no clue what else she will take along with her but she’s surely going to go crashing into something herself. There’s a limit to stupidity,” she says.

Bollywood, Nanda adds, is not one building, which can be demolished. It’s an idea that kept growing in size because more and more artists and businesses wanted to partake in it. Kangana cannot bring it down nor can anybody else, not even governments even if they wanted to. These days people are sitting at home making cinema, she says. Film critic Maithili Rao is another lapsed enthusiast of the waif-turned-warrior-turned-wounded tigress. This rank outsider, she says, made the girl next door feisty and sexy in a demure way with the breakthrough Queen. “From the neurotic waif with a mop of curls on the verge of breakdown in her early B-graders from the Vishesh stable, she escaped stereotyping. She was crowned India’s sweetheart who could do no wrong. Only briefly. Tanu Weds Manu [2011] made a quirky heroine appealing to an unadventurous audience. The shoddy sequel was only remarkable for her down-to-earth Haryanvi athlete who is cheated out of promised romance by the capricious Tanu. Ranaut the actor showed off her nuanced tonal variations.”

Then, says Rao, came the missteps in big ambitious films with established directors. Vishal Bharadwaj’s Rangoon (2017), Hansal Mehta’s Simran (2017) and her own production Manikarnika were monotone essays in narcissism. “You sensed her overconfidence in trying to pull off Simran where she was in every frame and no one to play against,” says Rao, adding, “Sorry, cinema is collaborative, especially when it comes to acting. Rangoon asked too much of everyone—actors and audience—because its ambition overran the execution, where individual parts were brilliant but could not hang together as a whole. As for Manikarnika, she opted for the Sanjay Leela Bhansali school of opulence and tagged on anachronistic Hindu nationalism to an epic story.”

There are suggestions that these setbacks are responsible for her jumping into controversies, all guns blazing. That she has flaunted her endorsement of the current regime of hypernationalism. “Kangana’s courage to take on the Bollywood establishment did win respect but this shrill unhinged avatar looks like a frustrated diva’s clamour for attention and relevance,” says Rao.

Kangana has repeatedly denied being a political pawn; though the ringing praise from the toughest members of the right wing such as BJP MP Subramanian Swamy and BJP General Secretary Muralidhar Rao keeps the suspicion alive. In the past, she has rejected several offers of fighting elections from various parties. Some politicians are quite chuffed at her needling the Shiv Sena, which she dubbed the “Sonia Sena”, especially since the party, ruling Maharashtra in alliance with the Congress, seems to have decided to bully her into silence and submission. It has only given Kangana fresh oxygen to breathe fire at those who have laughed at her, told her to leave the industry or called her “haramkhor”.

But it is highly unlikely that all this will consolidate her power in the industry. Kangana knows that Bollywood worships commercial success. A blockbuster Friday is the best way of vanquishing enemies and making new friends. Perhaps Kangana needs to press pause on telling her own story and resume telling the stories of others, of the so-called losers, the forgotten nationalists, the mothers next door, the women who dared to fly, even though everyone around them was desperately trying to ground them. Time to exit real drama and return to reel drama? at had preceded in the industry was not merely anti-national but also anti-Hindu. A slippery slope for an artist and even more so for a cultural commentator.