Striking a balance between competing interests and interpreting the law on the basis of the Constitution will serve the best interests of the court and the nation. Justice Chandrachud is well-versed in the Constitution. Upholding its provisions and true spirit in the face of exaggerated expectations will define his tenure 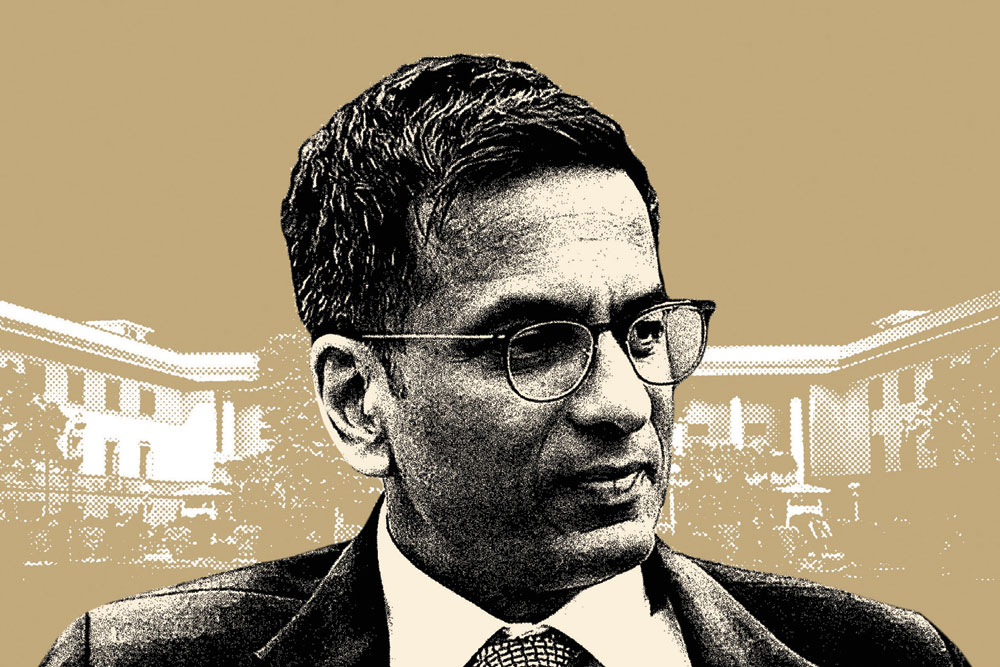 
JUSTICE DHANANJAYA YESHWANT Chandrachud is set for a longish tenure of two years as India’s 50th chief justice at a time when political polarisation, already running high, is set to peak ahead of the next Lok Sabha election in 2024. He will preside over the highest court at a time of unprecedented contestation when every ruling is scanned for an alleged bias for or against the ruling dispensation, and petitioners of every hue batter the doors of the Supreme Court seeking relief they believe is rightfully theirs and are far from shy in voicing their disappointment.

Justice Chandrachud is not an unknown entity. His career reflects excellence and pedigree at every turn. His father YV Chandrachud was India’s longest-serving CJI (Chief Justice of India), and the son attended elite schools and colleges before qualifying in law from Delhi University’s law faculty. He earned his Master’s from Harvard Law School and practised in the Bombay High Court and Supreme Court. He has a well-earned reputation for being thorough and demanding and possesses the rare skill of writing rulings with verve and intellectual candour. His public speeches are often quoted to highlight his regard for equity and justice with regard to human rights and gender. His remarks on dissent being the “safety valve” of democracy are often referred to underline his preparedness to uphold freedom of speech and the rights of individuals.

Of his many rulings, Justice Chandrachud’s dissent in the Supreme Court’s decision to uphold the constitutional validity of Aadhaar is spoken of—particularly by transparency campaigners—as a blow against Orwellian surveillance. He held that Aadhaar’s biometric processes could put constitutional guarantees at risk and that its passage as a money Bill violated the law. In retrospect, Aadhaar’s technology has proved robust in preventing any leak of biometric information and was vital in transferring money to those most at risk during the Covid-19 pandemic. It was also the building block for India’s remarkable UPI revolution. But the merits of the case were in any case not germane to the political debate and activism around Aadhaar. Partisans had made up their minds long before the Supreme Court’s ruling.

And while Justice Chandrachud’s dissent on Aadhaar, his authorship of the court’s verdict (the bench was headed by then CJI JS Khehar) to make privacy a fundamental right as well as his support for allowing women of all ages entry to the Sabarimala temple are highlighted by critics of the government who allege it has presided over “democratic backsliding”, his part in the unanimous ruling of the five-judge bench upholding the Hindu case in the Ayodhya dispute is less discussed. In fact, though the ruling unusually did not name the author, the style and close argumentation of the written order bore Justice Chandrachud’s imprint. There is, however, little doubt that the next CJI will be sensitive to issues relating to the rights of individuals and the disadvantaged. He is likely to be demanding in cases relating to detentions and arrests by law enforcement authorities, seeking a strict evaluation of evidence. But it might be an error to see this as a “lenient” approach. Those who have seen him in court say he is not likely to give anyone an easy pass. He has been prepared to be practical and pragmatic as well—a bench headed by him cleared the Delhi-Dehradun expressway and the Char Dham project, paying heed to the Army’s plea that it needs fast and reliable connectivity to the China border. The court appointed a committee of experts to assist in environmental matters related to the project.

The incoming CJI can be expected to defend and enlarge freedoms enshrined in the Constitution, assisted by his ability to embellish the law with new insights. To be fair, most of his predecessors, even if some lacked his erudition, have done their bit to protect institutions and apply constitutional tests to the executive’s decisions. His convictions are apparent in his approach to granting women equal rights in the armed forces and the decriminalisation of same-sex relations. His approach has often reflected a desire to settle bail applications speedily. A bench comprising Justice Chandrachud and Justice Hima Kohli speedily dismissed a plea by the Enforcement Directorate challenging the Bombay High Court’s granting bail to former Maharashtra minister Anil Deshmukh after stating that observations of the high court will not affect the trial. It has not passed unnoticed that Justice Chandrachud will take a hard look at the facts of a case and it may not be easy to predict the outcomes. In the course of hearing the Gyanvapi Masjid case, he observed that the Places of Worship Act of 1991 does not bar ascertaining the religious character of a shrine. In fact, he made a pointed reference to the Ayodhya ruling of which he was a part. In the coming days, as a consequence of outgoing CJI UU Lalit’s energetic efforts, the court will deal with fresh challenges to the Places of Worship Act and pending cases like the abrogation of Article 370 in relation to Jammu & Kashmir and the Centre’s demonetisation decision of November 8, 2016. Given his usual courtroom dealings, Justice Chandrachud is not inclined to allow adjournments he does not consider necessary. He has often encouraged junior lawyers to proceed with arguments observing that the senior counsel can join later. Pendency being a perpetual issue, this augurs well for the court, which has also started the live streaming of constitutional bench hearings—a development that has received a positive reception.

Justice Chandrachud’s task lies in steering the court through a maze of contesting perceptions amplified by social media. The challenge lies in facing the online “mob” that demands nothing but a result it considers correct and in line with its bias. Bail to the accused in the Delhi riots is a matter of bitter discord depending on which side of the ideological divide is represented. There is also the aggression of activist lawyers who often seek to harangue the court when things don’t go their way. The trend is increasingly evident in proceedings relating to controversial cases like the arrest of “Urban Naxals” in the Elgar Parishad-Bhima Koregaon violence. Aware that a strict interpretation of the law may not yield the desired results, some lawyers take recourse to aggressive posturing to get past the prosecution’s defence. The resultant cacophony has the effect of eroding trust in institutions, not the least the Supreme Court. Such a prospect has serious consequences for not just the judiciary but democracy itself. It is here that Justice Chandrachud will need to display his sagacity. Given the absolutist convictions of many who anticipate an era of liberal indulgence in the Supreme Court, the new CJI may well be seen to be wanting. Striking a balance between competing interests and interpreting the law on the basis of the Constitution will serve the best interests of the court and the nation. Justice Chandrachud is well-versed in the Constitution. Upholding its provisions and true spirit in the face of exaggerated expectations will define his tenure.

As has always been the case, a degree of tension between the court and the executive is inevitable. Stringent judicial scrutiny of legislation, executive decisions and actions of investigative agencies will enhance the court’s credibility. So will an active appreciation of serious threats to society and the nation.