How Covid Played with Sport

Sport in 2020 wasn’t only about achievements 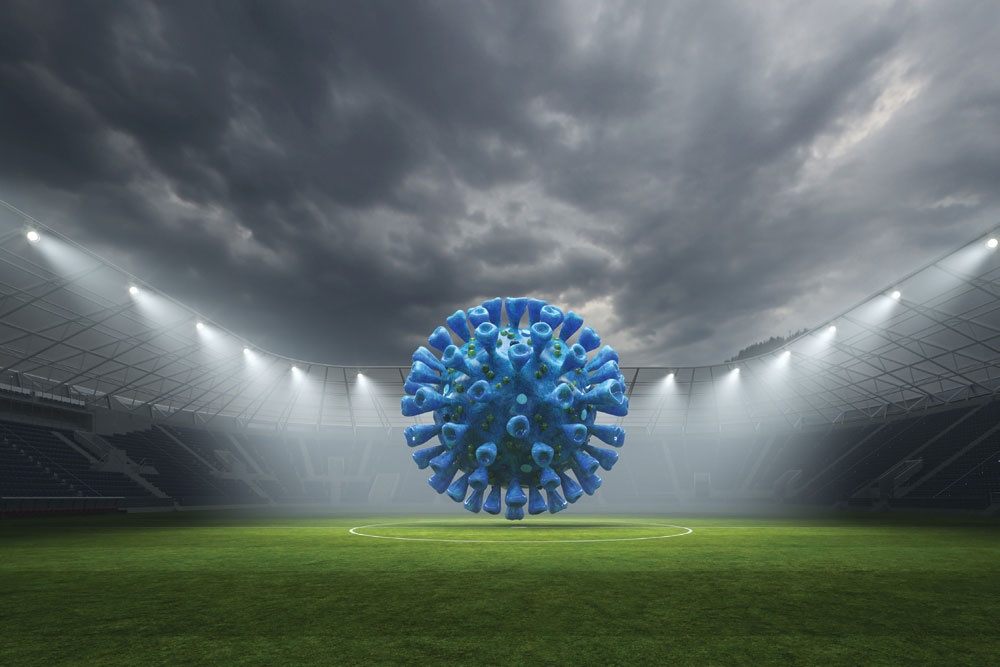 
IT IS NOT impossible to recall the day at the start of this year, when we so naïvely wet our forefingers on our tongues, and flipping through the sport calendar on our news pages, thrilled at the prospect of this year. The Olympics, the big football leagues, the marquee cricket tournaments, not to mention the T20 World Cup, the Grand Slams and its superstars in the twilight of their careers, the list went on and on. It was the same rush of feeling that greets you at the start of a new year. And it felt so much. And we wondered, like we always wonder, can we keep up?

Keeping up, of course, was not going to be the problem. Getting even a little bit of the promised schedule was. We sat locked in our homes, staring blankly in front of TV sets showing reruns of past games. Outside, a beautiful summer raged, but the fields and the stadiums were bare. Games were pruned and called off, and when some of them finally returned, they were so odd and surreal to the point of becoming almost unrecognisable.

The Covid-19 pandemic has asked many vexing questions of organisations and governments. But it also asked equally difficult questions of sport. In a year of countless deaths and financial misery, how important is a game where, for instance, a group of people chase a ball? What about the health of its athletes, the month-long tours now stretching to almost half a year or more? Do we need it? Do we really need it? And a sport is by nature also a spectacle. To play a game is to play it in front of others. What is a sport that is played in front of nobody, even if televised?

When the games returned to our TV sets, they had the touch of the surreal. There was the eerie sight of cardboard and video stand-ins for fans and pre-re•corded crowd noises. Few games match cricket in its empty pas•sages of play, where the broad•caster has to fill the time it takes a bowler to walk back to his run-up or someone to retrieve the ball by panning across the stadium for advertisements and colourful figures. In the IPL, they tried to make do by beaming giant videos of people dancing on the loop in their homes. Once seen, it was a sight that couldn’t be unseen. Then, there were the changed circumstances. Players now lived in demanding bio-bubbles and were barred from shaking hands. When some players decided against participating, as in the case of Suresh Raina opting out of the IPL, our first instinct was to ridicule, when in fact we should have accepted it as a decision that felt right for him. And then came the amusing moments. Of bowlers fretting over the ban on the application of saliva on the ball, or the sight of players having to retrieve balls from the stadium, now that there were no spectators to oblige them.

It is easy to ride with this feeling of how odd this whole year has been to believe nothing of significance occurred. But that would be incorrect. The virus may have dominated every sporting event, even dimmed the enthusiasm of its fans, but sport’s sweet succour, even though limited, was there.

There were moments when some individuals and teams broke through all this miasma of gloom, as can occur only in sport, to grasp something magical. Tennis, for instance, was severely affected, with Wimbledon being called off for good. But the sport witnessed the thrilling return of Rafael Nadal, when he beat the World No 1 Novak Djokovic at the French Open, to signal that there were still many miles left in his legs and his push for tennis’ glory is far from over.

Or across the other end of the court, his rival Djokovic, who until last year could not put a foot wrong, but who seemed to have unravelled spectacularly this year. Right from the moment when he seemed to scorn at the anxiety about the pandemic and organised that ill-fated tour where he, along with others, contracted the virus, to the moment when he had to concede the US Open, a Slam for his taking, when in frustration, he accidentally hurt the line judge. There were several such big moments, each one deserving of its own individual attention. Liverpool, for instance, dominating its rivals to finally end its three-decade-long drought to lift the English Premier League. Or the Australian women’s cricket team that won the T20 World Cup tournament moments before the world went into lockdown. Or that thrilling back-to-the-wall performance by probably the least fancied cricketer in the least fancied team in the IPL, Rahul Tewatia of the Rajasthan Royals, who in a matter of a few balls went from someone you cringed to watch bat to someone you couldn’t take your eyes off. It is the kind of script that could only be written on a sporting field. And it is something unlikely to happen again. Yet, in those few moments, one could even forget we were all in the midst of a pandemic.

Sport in 2020, however, wasn’t only about achievements. It was perhaps as a response to questions about its relevance in a time of such hardship that many sought to expand the scope of a game. They tried to make a sporting event not just a performance field but also a platform to deal with the larger questions churning in the world. To the extent that we may even call 2020 the year sport acquired its voice. Again and again, various leagues and its players had to deal with these larger questions burning in society. Players knelt before the start of games, negotiated with their teams and leagues, and wore jerseys supporting the Black Lives Matter movement. Lewis Hamilton—who put in one superlative performance after another, becoming not just the only Black driver in Formula 1 history, but also its greatest, equalling Schumacher on seven world championship titles and going past him in total wins—set the trend when he used his clout to speak for racial justice and force motorsport, a very inward-looking sport, to acknowledge its deficiencies in promoting more diversity.

The other breakout sportstar of this year, Naomi Osaka, won the US Open, while wearing a series of masks bearing the names of African-Americans killed throughout the tournament.

It is easy to romanticise such celebrity activism, and equally to dismiss them as performances, but it has pushed both the sport itself and its fans to imagine a game as some•thing much bigger than it has been so far.

Of course, the biggest sporting news came just a few weeks ago. In a year already made tragic by the early death of the basketball legend Kobe Bryant in a helicopter crash, the death of Diego Maradona, one of sport’s most enchanting figures, made the year even bleaker.

We don’t fully know yet how the pandemic will reshape sport. We don’t even know when we can return to the stadium, or whether elements such as cardboard stand-ins and pre-recorded crowd noises will become commonplace. But in a year when all our lives have been overturned, it is the brief moments in sport that have given us a little respite.