Should cryptocurrencies become mainstream, it would make a big dent on the power of governments 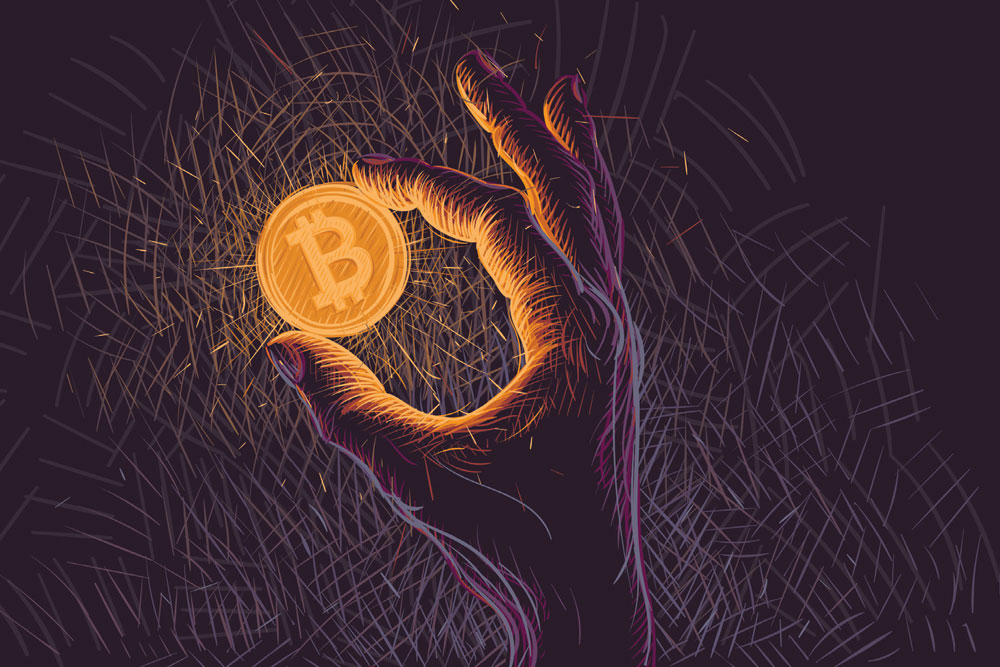 
BUYING A BITCOIN is very easy, as I found out. Even if you know nothing about it, all that you need to do is a quick Google search, download one of the many apps used for this, often going under the label Bitcoin exchanges. You fill in your details, upload identification and address proofs, link your bank account, online wallets, etcetera. And then in the app, you can put in an order for the amount. In one app I used, it began with Rs 250. For another one, it was Rs 500. The order can go into lakhs too, if you so wish. In the app, the current price of a Bitcoin is listed. If you think you can get it cheaper, you can place an order for a lower amount. If the market drops, then the trade will go through. If it doesn’t, you won’t get it and will have to go back and place another order. However, I did not buy any because I came headlong at an issue that Bitcoin and all cryptocurrencies face—and that is trust. Giving my details and bank account to startups involved in Bitcoin trading might be mostly safe, but it is not after all a bank or a stock exchange that is regulated stringently by government. You could get defrauded in those arenas too, but there is at least the dependability of experience. With Bitcoins and cryptocurrencies, you are really taking a leap of faith.

It is still nowhere as bad as it was in the beginning of this financial phenomenon. There has now been an incredible rise in the price of Bitcoins and that is on the back of some major US corporates, like electric vehicle company Tesla and its visionary founder Elon Musk putting their weight behind it. Tesla has bought $1.5 billion worth of Bitcoins and Musk has announced that they would now accept Bitcoins as payment for the purchase of cars. This has changed the nature of the beast. When Bitcoin first came online, it was predominantly an underground currency, used on the dark net for buying all sorts of things, narcotics included. In fact, Bitcoin’s beginning itself is something of a mystery. The man who invented it goes by the name of Satoshi Nakamoto, but that is only a pseudonym. No one really knows his identity and he disappeared from the scene, leaving it to be an entirely uncontrolled currency operating on the basis of the software and the community created around it. The website bitcoin.org, which he had initially registered, says this about Bitcoin and its founder: ‘Bitcoin is the first implementation of a concept called “cryptocurrency”, which was first described in 1998 by Wei Dai on the cypherpunks mailing list, suggesting the idea of a new form of money that uses cryptography to control its creation and transactions, rather than a central authority. The first Bitcoin specification and proof of concept was published in 2009 in a cryptography mailing list by Satoshi Nakamoto.

Satoshi left the project in late 2010 without revealing much about himself. The community has since grown exponentially with many developers working on Bitcoin.’

There is, however, one agency that does want to control cryptocurrencies—governments. Currency has exclusively been their preserve and it is a big arsenal in their armour in maintaining financial stability. For example, after the 2008 recession following the investment banks going bust and also now after Covid, the US printed unimaginable sums of currency to stave off economic collapse. Should cryptocurrencies become mainstream, it would make a big dent on the power of governments. People who don’t trust their government would just start turning to cryptocurrencies to store wealth and make transactions. Predictably, there has been action to discourage cryptocurrencies. What governments also do is offer security for market transactions against cheating and fraud. If they withhold that, then it is harder for the general public to trust cryptocurrencies. Also, they can just outrightly make it illegal. For some time, there has been speculation that the Indian Government is going this route. In the 2018 Union Budget speech, then Finance Minister Arun Jaitley had stated the Government’s position: “The Government does not consider crypto-currencies legal tender or coin and will take all measures to eliminate use of these crypto-assets in financing illegitimate activities or as part of the payment system. The Government will explore use of block chain technology proactively for ushering in digital economy.”

They now have a Bill ready on cryptocurrencies, but it is not known whether they intend to ban them. Many think that is going to happen. A Financial Express article this week said:

‘Although the Cryptocurrency and Regulation of Official Digital Currency Bill, 2021, is among the list of bills to be presented in the Budget Session of Parliament, but without any clue about the contents of the bill, the uncertainty is still there. So, there is no clarity on how this bill would impact the cryptocurrencies and what would be the impact on investors.’

Because it is hard to put the genie back in the bottle, another way governments are trying to address the issue is by creating their own sovereign digital currencies to challenge cryptocurrencies. China is already testing the waters on this front and even gave it for free on February 12th, their Lunar New Year, as an experiment of its usage. A Financial Times article said: ‘Authorities in several cities have given away tens of millions of renminbi as new year “red packets” that can be downloaded on to a smartphone. Beijing and Suzhou alone have doled out 200,000 red packets worth Rmb200 ($31) each in a public lottery. Such philanthropy conceals a harder-hitting agenda. By handing out the traditional red packets in the form of “digital renminbi”, China’s authorities are conducting trials for a crucial new technology that could lead the world’s adoption of digital currencies and set global technical standards.’

Towards the end of January, the Reserve Bank of India (RBI) released a booklet titled ‘Payment and Settlement Systems in India: Journey in the Second Decade of the Millennium’, which also envisioned issuing their own cryptocurrencies. It said: ‘Private digital currencies (PDCs)/virtual currencies (VCs)/crypto currencies (CCs) have gained popularity in recent years. In India, the regulators and governments have been sceptical about these currencies and are apprehensive about the associated risks. Nevertheless, RBI is exploring the possibility as to whether there is a need for a digital version of fiat currency and in case there is, then how to operationalise it.’

Like Tesla, Mastercard is another major multinational making cryptocurrencies mainstream by getting them onto their network of credit cards. On February 10th, they came out with a press release explaining their rationale: ‘We are preparing right now for the future of crypto and payments, announcing that this year Mastercard will start supporting select cryptocurrencies directly on our network…Our philosophy on cryptocurrencies is straightforward: It’s about choice. Mastercard isn’t here to recommend you start using cryptocurrencies. But we are here to enable customers, merchants and businesses to move digital value—traditional or crypto—however they want. It should be your choice, it’s your money.’

While all this makes a sanguine future for cryptocurrencies, unless you are a gambler, it might be better to stay away from them. For one, what action governments like India’s will take makes it an all-or-nothing bet. If it is made illegal, then you end up not knowing how to dispose of it unless you participate in an illegality. And secondly, there is the phenomenal rise in its price itself. It has moved almost five-fold in a year. Last February, one Bitcoin cost around Rs 7 lakh, and now it is at Rs 37 lakh. The only reason to get into it is to expect the price to keep rising but as the millions who have burnt their fingers in stock market bubbles know, the last fool is the one left holding something that he paid an absurd amount for and there was no one else who wanted to buy it anymore.