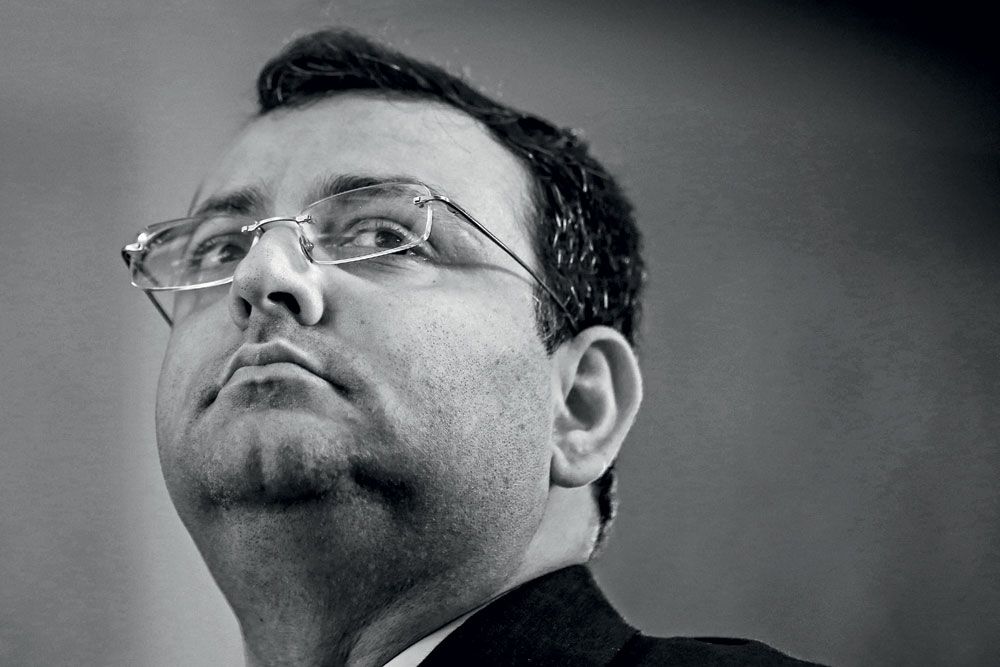 
WHEN RATAN TATA decided to retire and was on the lookout for a successor to head the Tata group, the name of Cyrus Mistry, scion of the Shapoorji Pallonji group, did not figure in the beginning. But he wasn’t really an outsider either. The Pallonjis and the Tatas have had intimate business and family connections for many decades. Ratan Tata’s stepbrother Noel is married to a sister of Mistry. The Pallonjis are the biggest shareholders of Tata Sons, the holding com­pany of all their other companies. Mistry had been on the board of direc­tors for a while. And he had to be convinced because he was himself the managing director of the Pallonji group at the time. Heading the Tatas would mean giving up on his own family business.

But four years after he had assumed charge, Mistry had been removed from the Tata group in what his side termed a boardroom coup engi­neered by the very man who had selected him. Mistry attributed it to the unwillingness of Ratan Tata to let go of the global empire that no one disputed he had created. On the other hand, Mistry had been a business leader since age 23 when he entered the family business. He was used to taking decisions without someone looking over his shoulders and he had already proved himself. As the book Tata Vs Mistry by Deepali Gupta said, “At twenty-three, Cyrus Mistry joined the family business after getting his engineering degree. He started to work on construction sites and worked with various departments before occupying a management office. Cyrus, just like his father and brother, demonstrated keen business acumen. Under Cyrus and Shapoorji, the group grew to an eye-popping Rs 18,000 crore [approximately $3 billion] in 2011 or 600 times from just Rs 30 crore when they took over twenty years ago.”

Mistry was his own man, with a vision of the future for the Tatas that he believed in. But he had a handicap. Though Pallonjis were the biggest shareholders, charitable trusts of Tatas held the rest of the shares of the holding company. Usually, both the chairman of the trusts and of the group is the same person. In Mistry’s case, it was not so. Ratan Tata still retained control of the trusts. And by way of the trusts, he constantly demanded a say in strategic decisions that Mistry was making for the group. It was something he found discomfiting. In turn, he began to assert his own independence in decision-making. The rift grew. Finally, the shareholding of the trusts in addition to Ratan Tata’s influence over the board made Mistry’s removal possible.

Even when he knew that he was going to lose the position, Mistry refused to accede. This came at a considerable personal cost. Because Tata Sons is not publicly traded, the stake that the Pallonjis have cannot be sold in the open market. And this would have repercussions later when the group saw debt levels increase and while on paper they held the vast equity in Tatas, it wasn’t something they could monetise. Mistry however stuck on, taking to litigation, scoring a victory in between and then finally seeing it overturned by the Supreme Court which ruled against him. There is the question of what-if had he continued to lead the Tatas. The group has done exceedingly well since then but it is also because of many of the changes he instituted. In his tribute in the Times of India, Mukund Rajan, who was a member of the executive council of Tata Sons while Mistry was at the helm, wrote: “The prudent strategies he put in place are still playing out, illustrated by such successes as the pivot of Tata Power away from thermal power to renewable, a new generation of stylish passenger cars by Tata Motors, and the substantial new capacity created at Kalinganagar by Tata Steel via what was the largest infra project in India.”

As the youngest person to ever head the Tata group, Mistry could have had many more decades to create a legacy, much like what Ratan Tata did. Even after his exit from there, Mistry started his own venture capital firm and was on his way to another innings. It was a life well lived as the obit advertisement of his family mentioned, but, for the age of 54, too short.