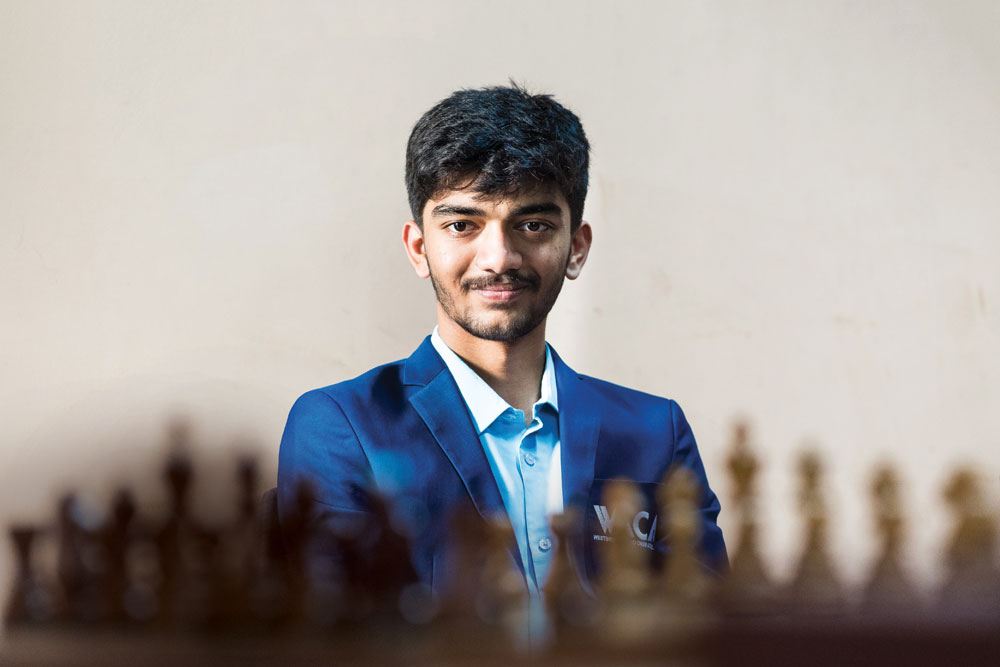 
IT IS NEARLY 3PM and D Gukesh, lanky in sweatpants, sheepishly admits to having just woken up. His parents are out running errands in preparation for his next tour. He flies out tomorrow to play in the Spanish League—at what time, he doesn’t know. “My dad takes care of all that,” he says. “All that” includes handling travel, media, social media, and the worries of day-to-day life, leaving Gukesh, India’s youngest grandmaster, to focus on chess. Focus doesn’t adequately describe the single-mindedness of a 16-year-old who has sacrificed everything—friends, school, and the luxuries of youth—to live life within 64 squares. When children his age were pouting at being denied dessert and the newest iPhone, Gukesh, even though he was chomping at the bit to level up, willingly gave up the privilege of using computer programmes, known as chess engines, to analyse his games. The man who extracted this unlikely promise from Gukesh shuns engines to a large extent himself.

Meeting Gukesh and his coach of five years, 33-year-old Vishnu Prasanna, one can have no doubt that they are on the same wavelength. Both speak in low voices, often with frustrating economy, keeping the conversation on track and rarely venturing extraneous detail. Each is intensely self-aware and conscious of his respective strength, but modest to a fault. And both are notoriously unassuming, bordering on shy. Together, Gukesh and Prasanna possess an apparent ability to produce work that has left the world of chess transfixed and inspired. Take, for instance, the moment in the 44th Chess Olympiad held in Chennai about two months ago where Gukesh, part of India’s Team B which cinched the bronze medal, tricked former world No. 2 Alexei Shirov into exposing his proclivity for playing aggressive moves. A small error by the elite Latvian-Spanish player, and Gukesh assiduously converted it into a win—his fifth in as many games. The Indian galloped on for three more games, the last of which he won playing black against world No. 5 Fabiano Caruana. “Gukesh’s most impressive move till date, for me, was his B5 against Shirov, although I am really proud of him for beating Caruana. The other seven players, I knew he could beat on a good day,” Prasanna says.


“Of late, I have been feeling more comfortable playing irrational moves. It is part of my evolving game,” says D Gukesh, Chess grandmaster

We are seated in Gukesh’s room, a modest, newly added suite on the first floor of the Dommaraju family home in Korattur, Chennai. There is a work chair, a table with a chessboard, shelves with trophies, books on chess openings and sport biographies, a wash basin, a door that presumably leads to a bathroom, and behind a curtain, a messy bed. This is Gukesh’s entire world right here. He sleeps over eight hours a day and keeps odd hours. “I enjoy physical sport but there is no one to play with, so I have started to train at a gym to keep fit. The rest of the time is mostly spent on chess. Vishnu Sir lives just 15 minutes away and is here to help me train for several hours every day,” says Gukesh. Prasanna’s unusual, freewheeling methods are not for everyone. Ruggedly individualistic and Zen master-like, he urges students to slow down and think about every action, to not rush through the days. Training often involves hours of talking about life and its attendant anxieties, hopes and desires. “If I have a specialty, it is psychology,” Prasanna says. While Gukesh’s commitment to curiosity and his intellectual humility have led him into the world top 20 — as of going to press he is the second seed from India after Viswanathan Anand, a whisker ahead of Arjun Erigaisi—Prasanna is the reason he recovers so quickly from upsets, and shrugs off achievements like they are nothing. When Gukesh became grandmaster (GM) after playing the 17th Delhi International Open Grandmasters Chess Tournament in 2019, he was only the second (now third, after American player Abhimanyu Mishra became the youngest GM aged 12 years, four months and 25 days last year) youngest player to have done so in the history of chess, aged 12 years, seven months and 17 days. The achievement was bittersweet, as he had missed Sergey Karjakin’s record of becoming the youngest GM by just 17 days. “I felt good for a day. But I quickly realised that my world hadn’t changed because of it,” he says.

Over the past two years since his daughter was born, Prasanna has almost exclusively devoted himself to little Shri Deekshitha and to his star apprentice. “The long-term goal is to be world champion,” Gukesh says, matter-of-factly. Yet, for all his confidence, there is a certain naiveté that comes from the isolation that high-level professional chess inevitably brings at such a young age. Gukesh is aware of and at ease with the choices he has made — including not appearing for Class X examinations last year—even as Prasanna wants him to have a social life in the coming year now that he has broken into the top 20 and can afford to play fewer events.

The Olympiad could not have come at a better time for Gukesh. Having elected not to play too much online chess during the pandemic, he had trained hard for over-the-board classical chess events. After a good show in open tournaments over the past few months, here was a chance to play some top-ranked GMs he would not otherwise get to face—and to climb up in the ELO rating system, the widely accepted method for calculating the relative skill levels of players in chess. Gukesh was now walking, sauntering even, through the crucible of 2,700-plus ratings, leaving a trail of excited admiration, his intellectual athleticism on full display in what was only his first Olympiad. But thriving as he was under pressure, fatigue and perhaps a bubble of wishful invincibility were enveloping the young player, and he blundered midway through a game he was all set to win. Uzbek Grandmaster Nodirbek Abdusattorov won against Gukesh, and India’s Team B lost out on the gold it could have taken home instead of bronze. Gukesh, the Olympiad’s breakout star, was disconsolate, and Anand, ever the guiding light of Indian chess, helped him calm down.

When Sagar Shah, co-founder and CEO of ChessBase India, the country’s biggest chess news website, interviewed Uzbek coach Ivan Sokolov after the event, he asked him what he thought of India’s young squad, including Gukesh, R Praggnanandhaa, Nihal Sarin, Arjun Erigaisi and Raunak Sadhwani. “He said that Gukesh has the most potential of them all because the others don’t venture into many positions—they like to have a sense of control,” says Shah, who has tracked Gukesh’s career from close quarters. “Of late, I have been feeling more comfortable playing irrational moves,” Gukesh admits. “I try sharp moves even if I do not fully control or understand how it will play out. It is part of my evolving game.”

“If I have a specialty, it is psychology,” says Vishnu Prasanna, Chess coach

TO YOUNG INDIAN chess players, watching Gukesh consistently punch above his weight is like watching Tom Sawyer whitewashing the fence. Players at the top of their game, like world No. 7 Anish Giri, are equally smitten by his creative ability. A couple of days after I met Gukesh, he plays yet another remarkable game against English player Gawain Jones in the Spanish League, felling him with a beautiful pawn-and-queen sacrifice to earn the sobriquet of “Gukesh the Dominator” on social media. Croatian YouTuber and chess player Antonio Radic, aka “agadmator” who runs one of the most popular chess channels on the internet, wastes no time analysing the game, only to gush: “This is a game you want to put in every book with tactics where you just want to show it to beginners. Once they see it they will love chess for the rest of their lives. That’s the kind of game this is.”

The world of chess does quite like the notion of a prodigy, and the ones from India are shifting tired old paradigms that no longer serve them. Sure-handed and ambitious, they are playing over 200 games a year, raking up ELO ratings faster than the previous generation could imagine. Some years ago, it would not have been possible to breach the 2,700 mark without ever having faced the top 10 players or playing elite invitation-only closed events, says V Saravanan, an international master and chess writer from Chennai. “Yet, look at the aspiring players from India today—between them they haven’t played a single super GM tournament. Online chess opened up the field to a certain extent, but it has no bearing on ratings.” Nihal, Praggnanandhaa, Gukesh and Erigaisi are all aspiring world-beaters who are only just wetting their feet at elite chess, Saravaran says. “Each of them is suitably paired with a coach they have come to rely on. Vishnu is all about inspiration. He believes the mind is your tool, and that you can use it to your advantage. He doesn’t believe in chasing targets.”

Prasanna came to competitive chess quite late, when his mother, looking for an outlet for his preteen energies, put him in chess coaching. It changed him completely, he says. He became thoughtful, playing out scenarios in his head on the two-km walk from the academy to his home in Mylapore. Prasanna, who became grandmaster at the age of 23, says there came a point where he couldn’t convince himself of his abilities as a player. “I wasn’t very good at playing to win, or being competitive,” he says. His play, he says, had been affected by engine overuse, though that was only one of the reasons. Later, when he worked as a second for grandmaster and friend Adhiban Baskaran’s debut at Wijk Aan Zee, (Baskaran finished third), Prasanna says he could see that despite poor engine work, he did very well. Baskaran says the partnership was mutually rewarding, and credits Prasanna for what he considers one of his best performances. “He forces you to think deeply, to unlearn, and to revise your time-hardened opinions,” says Grandmaster Surya Shekhar Ganguly, who worked with Prasanna in 2019. “I got my best results working with him. I think I was playing exceptionally because he made me feel like a child discovering the joy of chess all over again.” During training, Prasanna once gave Ganguly a position where he had to defend his pieces. “We talked about how, if I had encountered the same position in a game, I would be anxious. Vishnu made me understand something simple but profound—that when you are solving a position as part of training, you subconsciously feel that the situation is not of your making and that you are part of the solution, whereas in a game, ego comes into the picture and you worry about losing, and what it means for your self-image and your ratings.” In chess, as in life, one invariably craves a sense of control. For Prasanna, the solution is to sometimes walk in the other direction—like when he refused a job with the Railways and took up coaching to support himself financially. In Gukesh, he is already forging a mind sharp enough to experience, and to share with the world, beautiful moments of spontaneity.