Covering the Protests and Counter-Protests at Singhu 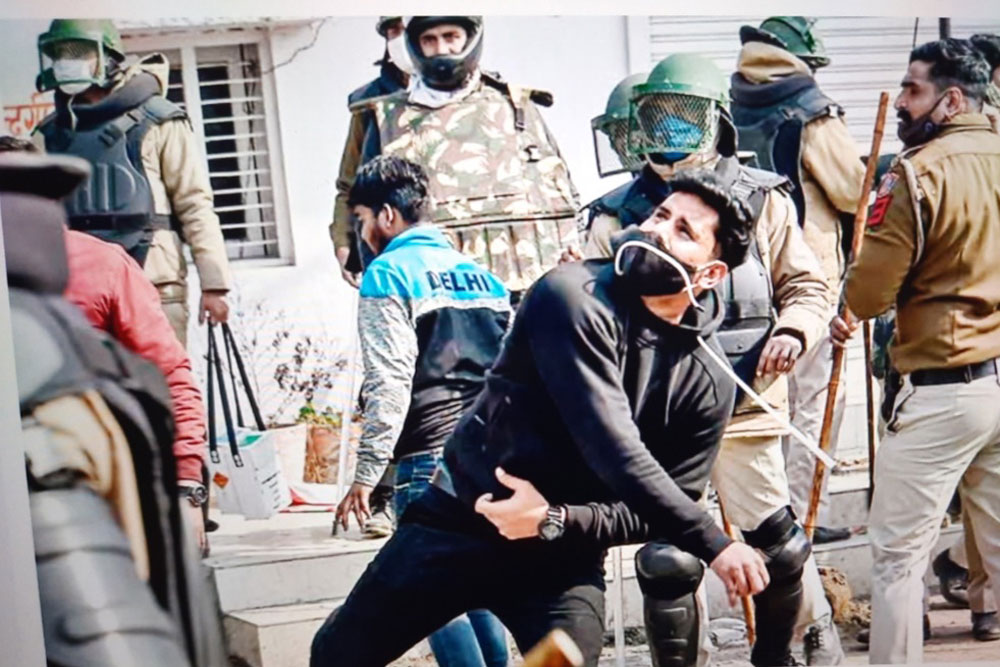 
Of all farmer protest venues on the edge of Delhi, Singhu is better off than the others. If you ask farmers in Ghazipur or Tikri border to compare themselves with those in Singhu, the hub of protests located on the Delhi-Haryana border, they immediately admit that there is more of an “NRI” influence out there, but hasten to add that they don’t begrudge it because they are fully contented with what they have. We are all one, is the common refrain. Frequently, farmers from these three locations hop from one location to the other to check on one another, share meals, chat and play cards.

I was at Singhu on the 25th of January, the day before the big day for the farmers. Unlike earlier visits, the place was packed to the brim that day and I had to occasionally wade through slush and use my familiarity of what I would like to call the ‘landscape’ of the protest site to move forward and cover as much distance as I could. On the first few occasions, I had tried walking long till my muscles ached towards the farthest point I could see the trucks and tents and community kitchens, but I could never make it to the end.

The day before the January 26 ‘tractor rally’ was more eventful, albeit inconvenient, because of the crowds that had come from afar to take part in the protest march, the first opportunity the farmers had got to leave the border since they began camping there on November 26. They were to head towards Delhi through an assigned route. Through conversations with the farmers, it was clear that they were frustrated and angry, some of them more than the others.

There were sober old people with long and saintly white beards who were sticklers for routine and discipline. There were also young people who were alert and composed despite what they described as ‘conspiracies’ to taint the march or ‘derail’ it. They also whispered to me about plots to ‘eliminate’ farmer leaders. They had already held a press conference and made a man confess in a televised event that he was there to bump off some farmer leaders and create mayhem.

Yet what overshadowed all such concerns at the protest site in Singhu – which has become a sort of a township, with its makeshift kisan mall, foot-massage centre, mobile toilets, washing machines, warm tents, desi geysers, automatic cooking utensils, libraries, e-learning centres, medical facilities, and women and children joining their men in a festive mood – was the euphoria of getting a break from a two-month routine and taking out a march the next day.

Of course, older men and women complained, as on previous occasions, about having to stand in queues for matutinal ablutions and the harsh weather that was too much of a hardship for them. A woman I met along with a fellow journalist said she starts her day with nine pills just to stay alive. But her ill-health had not affected her willpower, she said.

Others were upset with what they called the ‘absurd’ media coverage in some mainstream TV channels that they said were entirely prejudiced against the farmers. They had utter contempt for those who said farmers were living it up on the roads and eating to their hearts’ content. “Life is extremely tough here, but we do have a sense of purpose and togetherness. Many of us are unwell. Many of our comrades have died here in bitter cold. But we will fight on,” Harpal Singh, a farmer from Punjab’s Hoshiarpur had told me. He said his son was in the army and had paid him a visit there too. “Don’t call us anti-nationals. We cannot tolerate it,” he warned.

Notwithstanding all such short-lived mood swings, for an agitation that had lasted two months in the height of Delhi’s bitter winter, the mood was relatively upbeat, especially among the younger lot and women who were committed to roughing it out. They offered me laddoos laden with ghee and served with big grins. On earlier occasions, I had stopped by the langar and had some of the delicious kheer being generously handed out. The energetic youth and feisty women were always ready for a friendly chat, especially when the conversation veered towards the tractor rally on 26th.


We all know how things turned out the next day in Delhi when a breakaway group of young farmers deviated from the assigned tractor rally route and reached the Red Fort. And there were reports that farmers were going to leave their protest venues the next day or the day after that.

I landed once again at Singhu around noon on Friday, January 29, three days after the Republic Day that saw chaos and a death. The media was abuzz with news and views around it. You had to leave your vehicle and walk for some time before you reached the first batch of farmers in trucks and trolleys – they had come from Gurdaspur. Those from Amritsar and Jalandhar and other places had parked themselves much ahead on the road towards Haryana.

Something was amiss – that was the feeling that struck me immediately. I walked into the crowds, the composure of the farmers who were otherwise forever cheerful were comparatively downcast and older women simply kept their heads down. The incidents on Republic Day had hurt them to the extent that they seemed scared – or at least that was what I thought. Some of the farmers, mostly older ones, whom I spoke to, said they feared retaliation and were worried that stringent cases would be slapped on them. But as I walked on, towards where the washing machines were kept, the younger ones I found said they were unconcerned and would face the music come what may.

I struck up a conversation with one of the young volunteers at the medical centre who said he was worried for the older people many of whom suffered from high blood pressure, heart conditions and other life-threatening diseases. He somehow didn’t seem to think that the authorities were going to crack down on the farmers. His feeling was that these were, after all, farmers’ protests and who would want to hurt the farmers? He also downplayed the sloganeering by so-called locals from the other side of the barricade the previous day except arguing that they were not locals and that the people in the neighbourhood didn’t have any issue with the farmers’ presence.

I soon decided not to stick around much longer because there was an inexplicable anxiety or a sense of resignation that had suddenly set in. I began walking back despite having come this far.

As I headed towards my vehicle, I glanced towards the policemen standing behind a large group of civilians, some of whom were hurling cuss words at the farmers. The slogan, Desh ke gaddaron ko… goli maaro saalo ko (shoot the traitors), became louder even as I drew away from the crowds. Yes, this is a recurring slogan, I remembered. One had heard it outside JNU, near Shaheen Bagh, and outside Jamia Millia Islamia in recent years.

The next thing I saw from behind camera-wielding TV crews were barricades being slightly opened to let those sloganeers into the protest venue. Then, to our collective disbelief and shock, these people started pelting stones at the farmers. Some of the more enthusiastic among them, who had conveniently covered their faces with masks and shawls, began to pounce on the tents and places where cooking vessels were kept with sticks. They were identified later by a section of the media as locals ‘outraged’ at the protests dragging on in their backyards.

I couldn’t believe it: the police stood as mute witnesses as if in a roll-call meeting until the farmers, including the nihags, the militant Sikhs, began to resist and push the intruders away after an initial shock. But they were met with more aggression from the outsiders. Elderly people among protesters could be seen trying to pacify their young men who were aching to head for a fight. The cops finally acted – by lathi-charging the farmers.

Later, the police claimed some of the protesters had used their swords on the cops. It was only after my return that I saw the videos of a young Sikh with long locks (without his traditional turban) being taken away bleeding to a police vehicle. He was being beaten up badly by both the cops and the outsiders.

Farmer leaders whom I spoke to afterwards denied that cops were attacked with swords. They said they used the swords to scare off the attackers, not the police. Darshan Pal, president of the Krantikari Kisan Union, who is a regular at the talks held between farmers and the government, said the so-called ‘locals’ were in fact hired goons. The farmers were nonplussed by the capture of the young bleeding protester along with some 43 others. One of the younger ones said he didn’t even care about dying for the purpose of these protests and that he has the capacity to endure excruciating pain.

The immediate change in Singhu after the police took control of the situation was that of the ‘landscape’ of the protest site. I am told that the tents and people have been pushed backwards towards the Haryana side. The only way now to reach protesters is to take winding roads deep inside and walk down narrow alleys to the middle of where the farmers are now camping.

It is tough for me to let things go after witnessing a violent assault – which some people are terming ‘clashes’.

Like in Ghazipur and also Tikri, the farmers are back in large numbers a day later in Singhu, but accessing it has become tougher than one can imagine with forces in full combat gear standing guard and restricting entry.

The place that I had begun to associate over the past two months with welcoming faces, buoyancy, broad smiles and a sense of purposeful unity is now shrouded in dark clouds of gloom. What the chilly thunderstorms of north India’s infamous winter couldn’t quell earlier has been achieved by the ominous chorus of hate cries.