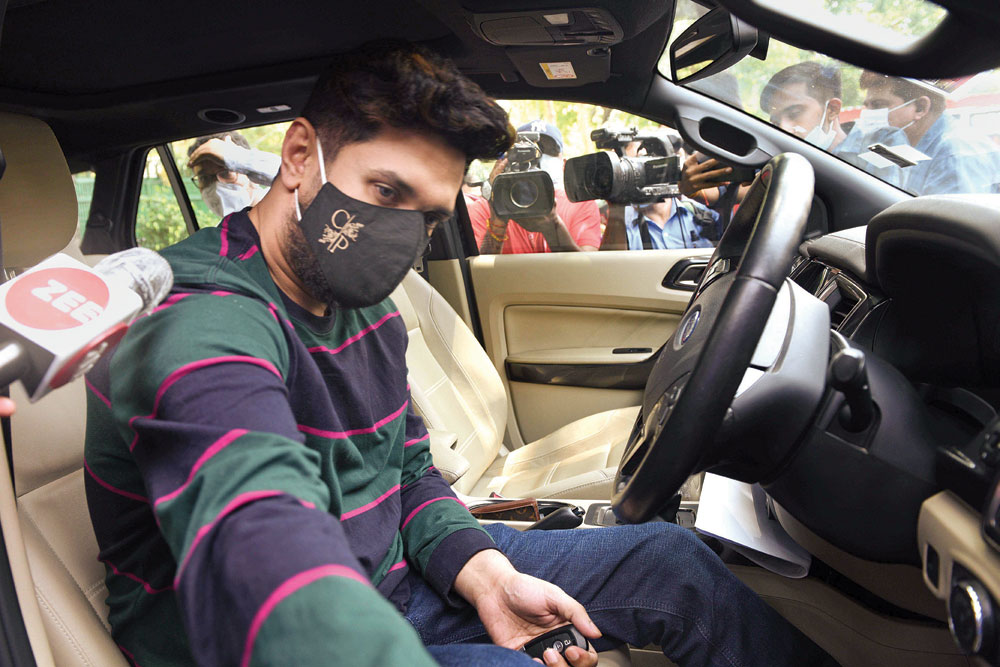 
Sometime in 2010-11, Chirag Paswan had acted in a movie (with Kangana Ranaut opposite him) called One and Only. Perhaps it was a title meant to hail his acting career but by the ides of June 2021, just a decade later, it is a foreboding of the desolation staring him in the face in his fledgling political career. On June 14th, five of the six MPs of the Lok Janshakti Party (LJP)—built from the Dalit Sena by his father Ram Vilas Paswan in 2000—pulled the rug from under his feet. Led by Chirag’s uncle Pashupati Kumar Paras, they removed him as party president at a meeting held on the night of June 13th, with plans to meet the Election Commission (EC) to lay their claim to the party’s stakes and symbol. Following a well-oiled script to oust Chirag, a meeting was then quickly arranged with the speaker of Lok Sabha—by the evening of June 14th—by the Bharatiya Janata Party’s (BJP) Paschim Champaran MP, Sanjay Jaiswal. Hand in glove with him, in executing the operation, was senior Janata Dal-United, or JD(U), leader and MP, Rajiv Ranjan “Lalan” Singh.

The backstory to the unceremonious ouster of the young Chirag Paswan was the festering unhappiness among the party leadership with his decision to move against JD(U) chief and Bihar Chief Minister Nitish Kumar, whom Chirag had launched frontal personal attacks against in the run-up to the state Assembly election in 2020. Uncle Paras, sharing a special relationship with Nitish, had raised objections but was overruled by Chirag who had only joined politics as recently as 2013, contesting from Jamui (not Hajipur, considered his father’s pocket borough) in the 2014 Lok Sabha elections and again in 2019. An ailing Ram Vilas Paswan had elevated his son to party president, superseding his brother Paras who had served as his able second-in-command for years. Paras, despite all the work he did on the ground, was not considered politically astute enough. As the story told by Paswan Sr went, it was Chirag who had advised him to mend fences with the National Democratic Alliance (NDA) and return to its fold in the run-up to the 2014 General Election, something that proved advantageous to LJP. Ram Vilas Paswan had remained food, consumer affairs and PDS minister in both Narendra Modi governments in 2014 and in 2019.


Paras—his younger brother Ram Chandra Paswan passed away after the 2019 Lok Sabha polls—never went public on the differences with his nephew when he was made party chief by Ram Vilas, or even when Chirag appointed his cousin as LJP’s state president. But he is known to have called him “arrogant” in private more than once. The cards Chirag played came up blank in the Bihar campaign, with his “Lord Ram,” Prime Minister Narendra Modi, choosing to address half-a-dozen rallies in a continuing alliance with Nitish Kumar’s JD(U) and the election results marooned LJP politically. Neither did LJP manage to preserve its strength in the state polls nor did the younger Paswan manage to secure the key food and consumer affairs berth that became vacant after his father’s death. From anywhere between 5-12 per cent of the Paswan+ vote in earlier Lok Sabha and Assembly elections, LJP’s tally, helmed by Chirag, crashed to less than 1 per cent, chalking up a single seat in the Assembly, the party’s worst performance since its inception.

An ailing Ram Vilas Paswan had elevated his son to LJP president. Paras, despite all the work he did on the ground, was not considered politically astute enough

Chirag Paswan had plotted to become kingmaker in Bihar, hurting NDA and JD(U) in particular. In at least 27 seats, LJP’s vote tally directly resulted in Nitish Kumar’s loss and big gains riding on the death of Ram Vilas Paswan. But the second goal was a non-starter. Suddenly, BJP and Modi slammed the door on his face. It did not start out that way, though. Home minister and BJP’s master poll strategist, Amit Shah, had tried to convince him to stay on board NDA with JD(U) alongside. But Chirag had big plans for LJP and refused to play ball. His plans damaged NDA’s performance in Bihar, leading to BJP’s reluctance to give Cabinet berths to LJP and its chief subsequently. JD(U) had, interestingly, refused ministerial berths after the 2019 General Election following differences over the number offered. Any Cabinet reshuffle exercise planned now also had to factor in the JD(U) chief’s hostility to Chirag Paswan. It was with this in mind that the operation to oust him as LJP president was executed. A big role in studying the party’s constitution to thwart any valid challenge in the EC over party name and symbol was also played by JD(U)’s Maheshwar Hazari, deputy speaker in the state Assembly and a onetime LJP MLA, who approached Paras to convince him to switch allegiance and co-opt the other MPs in the party.

Chirag Paswan was an engineer by training against whom a coup was engineered by his own uncle and his cohorts. But palace intrigues of the sort faced by Chirag—his political trajectory is now threatening to grind to a full stop—are a dime a dozen in history. Especially in Islamic kingdoms since primogeniture was not considered essential for succession and allowed many rival ‘heirs’ to stake their claim to a single throne. Bitter and, at times, terrible wars of succession ensued, debilitating the very empire.

One such well-documented instance related to Mughal emperor Akbar who promoted his grandson, Prince Khusrau Mirza, over his own son, Prince Salim, who later took the title of Emperor Jahangir. With Akbar’s death in 1605, Khusrau proclaimed himself emperor. But he was later blinded and imprisoned by his father. In 1622, he was killed by his own brother, Prince Khurram, who later took the title of Emperor Shah Jahan and became famous for constructing the Taj Mahal in Agra. Events came a full circle when Shah Jahan was imprisoned at Agra Fort by his son Aurangzeb in 1658 in a bitter war of succession. He died in 1666. History records that dozens of princes were killed in wars of succession among brothers between the reigns of Akbar and Shah Jahan. Aurangzeb appears to have escaped this terrible fate, mostly because he quickly divested all princes of their individual bases and military commands. But soon after Aurangzeb’s rise to the throne and later his death, the Mughal Empire started imploding, as if its core of survival were the fratricidal assassinations and wars of succession.

In a bid to prove his son’s political sharpness, Ram Vilas Paswan may have recounted proudly how it was Chirag who suggested in 2014 that he mend fences with NDA and rejoin the alliance, but he also indicated that he was not fully sure of Chirag’s political acumen or happy with his decision to steer LJP into a confrontation with JD(U). An ailing Paswan Sr—he died a few days before the Bihar election last October—was compelled to let his son have his way, however.

Chirag is not the only heir apparent to political stalwarts who fell far short of both parental and public expectations. In January 2017, Akhilesh Yadav—a political novice compared to his father—ousted the charismatic Samajwadi Party (SP) leader and former Uttar Pradesh Chief Minister Mulayam Singh Yadav from the top party post in a bloodless but prolonged and bitter coup. A “special national convention” of over 10,000 party delegates called by his uncle Ram Gopal Yadav appointed Akhilesh SP’s national president. Mulayam was named “supreme patron”, clearly a titular position. Shivpal Yadav, at loggerheads with Akhilesh, was replaced as the party’s state president. Mulayam promptly called a parliamentary party meeting to expel Ram Gopal and others and declare that his list of candidates for the state polls would supersede all else. But Akhilesh had ensured the presence of several senior leaders and once Mulayam loyalists, including Rewati Raman Singh, Kiranmoy Nanda and Naresh Agarwal. The battle ended with Akhilesh taking full control. He also took the decision to bury the hatchet with arch-rival Mayawati, chief of the Bahujan Samaj Party (BSP), and to ally with Congress for the 2017 Assembly polls. It proved SP’s biggest damp squib with the Yadav family barely retaining their seats and BJP riding to power resoundingly for the first time in 27 years. SP went into a prolonged sulk thereafter until Akhilesh recently announced that his party would not have any truck with either BSP or Congress for the 2022 state elections.

As the story told by Paswan went, it was Chirag who had advised him to mend fences with NDA and return to its fold in the run-up to the 2014 polls, something that proved advantageous to LJP

In 1982, NT Rama Rao (NTR) formed the Telugu Desam Party (TDP). His son-in-law, N Chandrababu Naidu, who later became one of united Andhra Pradesh’s most flamboyant chief ministers, built the organisation. TDP won 202 of the 294 seats in the state Assembly in the polls that followed. But in 1995, Naidu rebelled against NTR, ostensibly on account of the latter’s association with Lakshmi Parvathi, his biographer-turned-wife, against family wishes. Parvathi’s alleged interference in party and government affairs were the purported trigger for the revolt. Overnight, the 200-odd MLAs fled NTR to join Naidu who took over party and government. Novice Lakshmi Parvathi’s desperate attempts to stake claim to NTR’s political legacy after his death in 1996 came to nought.

Janaki Ramachandran’s attempts to take control of the All India Anna Dravida Munnetra Kazhagam (AIADMK) and the charismatic MG Ramachandran’s (MGR) political legacy in Tamil Nadu after her husband’s death in 1987 failed miserably as well. Days after her taking over party and government, President’s Rule was imposed by the Rajiv Gandhi Government at the Centre. The subsequent state polls swept the Dravida Munnetra Kazhagam (DMK) to power and paved the way for the successful takeover of both AIADMK and MGR’s legacy by J Jayalalithaa, then party general secretary.

For Chirag Paswan, the road to any political resurgence promises to be lonely, long and hard.