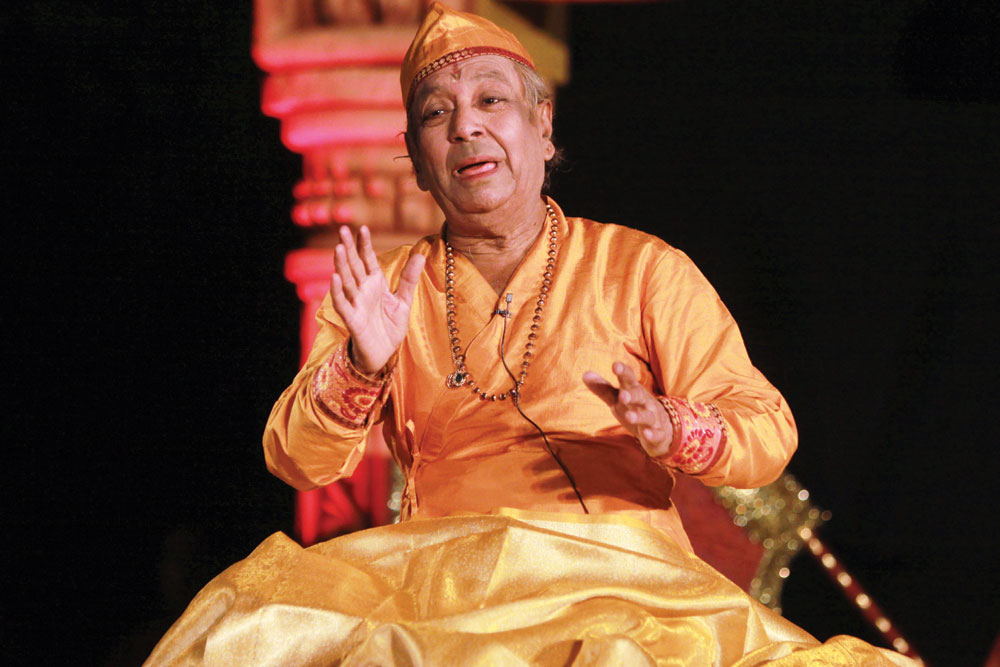 
HE COULD BE coy like Radha and mischievous like Krishna, after whom he was named. He could be a delight for purists and equally hap­py to experiment in Bollywood. He was a tough maestro, but he was also a loving guru. He could choreograph a dance-drama based on Mirza Ghalib’s poetry as easily as he could a ballet based on Jayadeva’s ‘Gita Govinda’.

One of India’s greatest Kathak dancers, the ability to resolve dual identities was a given. Kathak itself is a dance that developed during the Bhakti movement and got patronage in Muslim courts. Birju Maharaj’s great-grandfather performed in the court of the Nawab of Awadh, Wajid Ali Shah—how perfect then that Birju Maharaj choreographed the Kathak dance performed by his disciple Saswati Sen in Satyajit Ray’s version of the Wajid Ali Shah era in Shatranj Ke Khilari (1977).

The ability to resolve various conflicting traditions is also something Birju Maharaj knew well, growing up in a Lucknow neighbourhood where Muslims and Hindus lived together. As he said in an interview, when speaking of his days in the once sprawling ancestral home in Golaganj, Lucknow: “I recall playing Holi in the empty drums of Hamidbhai’s laundry across the street. The maulvi sahib of the nearby mosque was quite tolerant of our music and dance throughout the year, and we in turn would not put on our ghungroos or play loud music during Muharram. There was never a Hindu-Muslim riot in Lucknow in our time.”

It was this civilisational ethos that Birju Maharaj embodied, whether he was dancing to the beats of Ustad Zakir Hussain’s tabla in Carnegie Hall, New York, or explaining a particular move to Madhuri Dixit under Sanjay Leela Bhansali’s watchful eye in Devdas (2002)—following in the footsteps of his uncle Lacchu Maharaj who worked on Mughal-e-Azam (1960) and Pakeezah (1972). He was as adept at singing Hindi film songs as he was playing the tabla or singing Raga Bhairavi. He was an exacting teacher, demanding from his students no less than what he asked of himself: “Riyaaz [practice] never ends because we can never attain complete perfection,” he often said.

His life was one long journey to that end. Belonging to the famed Kalka-Binadin gharana of Lucknow, he lost his father when he was nine. Saswati Sen writes in her biography of the maestro, Birju Maharaj: The Master Through My Eyes (Niyogi Books) that as a child, he was often woken up from his sleep to perform, with kajal in his eyes and a tilak on his forehead, before his father, Achchhan Maharaj, at the court of the Nawab of Rampur. Performance after performance, student after student, innovation upon innovation, Birju Maharaj later headed the Kathak Kendra in Delhi, where his path often crossed with those who studied at the National School of Drama (NSD).

Delhi was an exceptionally genteel city then. Its now much-abused Lutyens’ heart was where culture lived and breathed in institutions such as the NSD, Kathak Kendra, Triveni Kala Sangam, and Mandi House. Having come to Delhi as a teenager to teach Kathak, Birju Maharaj was part of a state-funded movement to reconstruct the performing arts. He was not alone in doing so. Indrani Rahman enthralled audiences as she revived the art of Odissi, as did Yamini Krishnamurthy with Kuchipudi. Habib Tanvir combined folk and urban actors in the Naya Theatre, while Sheila Bhatia’s operas were showcasing Urdu and Punjabi poetry. As Feisal Alkazi writes in Enter Stage Right: The Alkazi/Padamsee Family Memoir (Speaking Tiger), architects Habib Rahman, Raj Rewal, and Joseph Stein were changing the contours of the capital, building a “new” India, “now free and standing tall.”

In Kathak, Birju Maharaj once said, “we express ourselves through our body. Two sides, left and right, become two different people. Like, Krishna comes stealthily…. So, from one side I depicted Krishna, and the other side became Radha. Two characters live in one body.” Once, there was a Delhi that could say it was as accommodating.

With the passing of Birju Maharaj, it is not merely an era in Kathak that has ended but in a way, the age of restoration and resurrection of Indian art forms has come to a close.